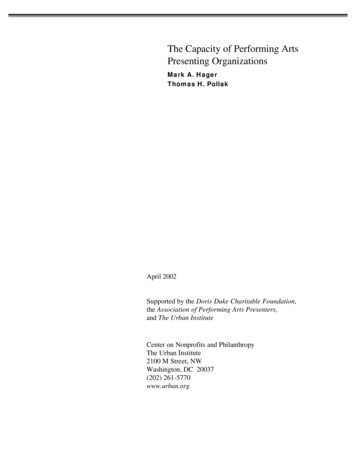 Nearly two-thirds of the organizations in the study are freestanding nonprofit organizations,while the remaining one-third are hosted by other entities. This ratio holds for organizationsof all four budget classes.3. Community Type. One in three respondents are in small cities, our most commoncommunity type. The smallest number of presenters are in suburban locations, with urban andrural presenters falling in between.4. Presenter Age. The organizations in the study represent a range of organization ages. Onehundred thirty-seven organizations in the study report that they began presenting theperforming arts before 1960. On the other hand, 209 indicate that they began their presentingactivities in the past decade. The creation of urban presenting organizations fell offsubstantially through the 1980s and 1990s, with the founding of presenting organizations insuburban settings taking up the slack.5. Organizational Type. Nearly half of the organizations in the study are traditionalperforming arts facilities or presenting programs that are part of an academic institution.However, a substantial minority of respondents are fairs or festivals, museums or othercultural venues with presenting programs, performing groups that also present the work ofothers, or culturally specific presenting organizations.These different organizational characteristics provide a basis for exploring variations amongorganizational programs and the attitudes of their managers. The report is divided into sixdifferent substantive areas: scope of programs and activities, sustainability and financial stability,leadership, international artists and cultural diversity, audience development, and technologicaladaptation. We present the major points from each section here.I. Scope of Programs and ActivitiesThis section provides information about the overall size and scope of performing arts presentingorganizations. We observe that the average presenting organization has 8 or 9 staff members,ranging from 2 to 37 between the smallest and large budget categories. Most staff members inpresenting organizations are administrative staff, although some organizations maintain artisticand production staff as well.By far, music is the most common art form contracted by performing arts presentingorganizations. However, the average number of contracts to performances runs in nearly a 1 to 1ratio, making music one of the most administratively taxing art forms to present. In contrast,nonmusical theatre and Broadway musical theatre are contracted in much fewer numbers butaverage over five performances for each contract.The majority of presenting organizations select their programming primarily on artistic merit butalso consider their financial goals. Roughly one in five presenters claim that they select theirprograms based exclusively on artistic merit. Two of the study organizations, both of them in thesmallest budget category, indicate that their booking decisions are based almost exclusively ontheir potential to meet financial goals.THE U RBAN I NSTITUTE 3 C ENTER ON N ONPROFITS ANDPHILANTHROPY

III. LeadershipThis section focuses on different dimensions of leadership. First, we report on how presentingorganizations perceive their own artistic and managerial leadership, both of which rank verypositively on a 1 (low) to 5 (high) scale. However, managers responding to the survey were lessglowing about their ability to recruit qualified personnel and provide competitive salaries. Indeed,organizations with the smallest and small budgets average less than a neutral 3 when assessing thecompetitiveness of their salaries.We asked presenting organizations to report the salary range into which their highest paid personfalls. Average highest salaries range from 42,400 in the smallest budget organizations to 123,100 in the large budget organizations. Highest salaries also vary substantially by communitytype, organizational type, and geographic location. The highest salaries are found in organizationswith the largest budgets and in organizations that are located in urban areas. Also, the highestsalaries are found in traditional freestanding performing arts facilities. Salaries are lowest amongorganizations without their own facilities, festivals and fairs, and presenting programs run frommuseums and local arts agencies.Presenters reported their perception of board leadership on the 1 to 5 scale. Board leadershiprated somewhat lower than self-assessments of artistic and managerial leadership, especiallyamong those organizations with smallest, small, and medium budgets. Presenting organizationsvary substantially in terms of the degree to which board members contribute substantial sums tothe organization’s budget. More than one-third of presenters that receive board contributionsreceive less than 5 percent of total contributions from their board. On the other hand, more than11 percent of organizations with boards received more than half of their total contributions fromboard members.IV. International Artists and Cultural DiversityThis section highlights survey questions on the presentation of artists who live outside the countryand the cultural diversity of the staff, artists, presentations, and audiences of the presentingorganizations themselves. On the issue of international artists, we observe that larger budgetorganizations are generally more involved in the presentation of international artists than theirsmaller counterparts. However, organizations with medium budgets lead the way in both thenumbers of international artists presented and the proportion of all performances presented byinternational artists.We asked presenting organizations to assess the diversity of their board, staff, presentations, andaudiences on a scale from 1 (low) to 5 (high). While the average assessment of the diversity ofpresentations averages around a value of 4, diversity of audiences rests closer to 3, and diversityof board and staff ranges from 2 to 3. On average, performing arts presenting organizations assessthe diversity of their board and staff as moderately weak.THE U RBAN I NSTITUTE 5 C ENTER ON N ONPROFITS ANDPHILANTHROPY

THE CAPACITY OF PERFORMING ARTS PRESENTINGORGANIZATIONSIntroductionPerforming arts presenting organizations are an integral part of the performing arts field and animportant contributor to the cultural life of most communities. Presenting organizations, such asperforming arts centers, local arts agencies, and community festivals, play an importantintermediary role between artists and audiences. Increasingly, these organizations are playing aprimary role in the development of artists and the creation and development of new work.However, partly because they are found in diverse institutional settings, presenting organizationsare often unrecognized as a distinct organizational form, even among arts researchers. Performingarts producing organizations—the theatre troupes, dance companies, musical groups, and operasthat employ artists in the production of art—are the obvious form that we think about when wedescribe the performing arts. However, the entities that present these producing companies, oftenwhen the producing companies are touring to different cities, escape the attention of the generalpopulation, the arts research community, and many institutional funders.To date, research has provided little information on the scope of the field of performing artspre

Nonprofit Self-Assessment Checklist
May 02, 2018 · D. Program Evaluation ͟The organization has provided a description of the framework for how each program will be evaluated. The framework should include all the elements below: ͟The evaluation methods are cost-effective for the organization ͟Quantitative and qualitative data is being collected (at Basics tier, data collection must have begun)
1m ago
221 Views

The Alchemy of High-Performing Arts Organizations, Part II .
theater, performing arts center, and multidisciplinary . performing arts sectors, as well as 10 leaders of com-munity-based arts organizations (CBOs) in the folk arts, cultural and ethnic awareness, and general arts and culture sectors. 2. with a track record of high performance along seven financial and operating metrics in recent . years. 3
6m ago
23 Views

A KALEIDOSCOPE OF THE PERFORMING ARTS
The term “performing arts” refers to forms of art in which artists use their voices, bodies, or inanimate objects to convey artistic expression. The performing arts include a range of disciplines which are performed in front of a live audience. Performing arts may include dance, music, opera,
6m ago
19 Views

Rehearsing, performing and taking part in the performing .
organisations and individuals in the performing arts in Wales who rehearse, present, or take part in arts activity. It is additional to guidance already published by the Welsh Government to assist thosemanaging theatres, arts centres, galleries, and other venues where the arts activity takes place.
6m ago
17 Views
Popular Tags
Recent Views