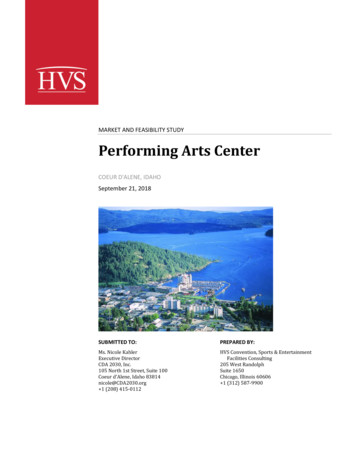 Convention, Sports & EntertainmentFacilities ConsultingChicago, Illinois1. Introduction and Executive SummaryNature of theAssignmentCDA 2030, Inc. engaged HVS Convention, Sports & Entertainment FacilitiesConsulting (“HVS”) to conduct a study assessing the feasibility of developing aperforming arts center in Coeur d’Alene, Idaho. The proposed performing artscenter could provide a state-of-the-art performing arts venue for variouscommunity uses, including cultural performances, educational programs, civicevents, and private rentals. In addition, the proposed performing arts center couldenhance the demand potential of touring concerts and theatrical productions inCoeur d’Alene.This study assesses the feasibility of a proposed performing arts center based onwhether it will 1) satisfy the venue needs of the local arts community, 2) generatea sustainable financial operation, and 3) create new and positive economic impact.MethodologySeptember 21, 2018In accordance with the Scope of Services, HVS performed the following tasks:1.Thomas Hazinski and Catherine Sarrett traveled to Coeur d’Alene, Idaho onFebruary 26-27, 2018 and conducted a series of meetings and interviews.During this visit, they met with the CDA 2030 Board, toured severalpotential sites for the development, interviewed several potential usergroups and other key industry participants, and gathered relevant data.2.Analyzed the economic and demographic data that indicate whether, andthe extent to which, the local market area supports the proposedperforming arts center.3.Performed an assessment of industry trends and participation in theperforming arts,4.Interviewed and surveyed potential user groups to assess their venueneeds and potential event demand they could generate.5.Compiled data on 31 competitive and comparable performing arts centersto test the reasonableness of the building program recommendations andinform event demand projections.6.Recommended a market-based facility program based on the above steps.7.Prepared an evaluation of 12 possible sites for the performing arts center.8.Prepared event demand and attendance forecasts based on theimplementation of the program recommendations.Introduction and Executive SummaryPerforming Arts Center – Coeur d'Alene, Idaho1-1

Convention, Sports & EntertainmentFacilities ConsultingChicago, Illinois9.Prepared a financial forecast for the proposed performing arts centeroperations.10.Identified alternative methods to own and manage the proposedperforming arts center.11.Identified alternative methods used to finance the construction ofperforming arts centers in the United States.12.Assessed the economic and fiscal impacts the performing arts center wouldhave on the City of Coeur d’Alene.HVS staff collected and analyzed all information contained in this report. Wesought out reliable sources and deemed information obtained from third parties tobe accurate.Role of Performing Artsin CitiesThe presence of performing arts opportunities in a community directly affects theindividual residents, as well as the quality of the community as a whole. A thrivingperforming arts culture increases the propensity of residents to participate in thearts, which in turn increases the attractiveness of the community to residents,tourists, businesses, and investment. Since an interest in the arts is highlycorrelated to education level, the people that are attracted to live in communitieswith a strong arts presence tend to be well educated and highly-skilled.Communities with a robust arts identity tend to have a more favorable image andstatus while also enjoying reduced crime rates and a greater degree of culturaldiversity. The arts also foster creativity among community residents that can spureconomic growth in creative industries.Quantitative impacts of a performing arts center include the spending on culturalevents by visitors and residents who keep their spending in the community ratherthan exporting it. In addition, this spending generates fiscal impacts fromassociated tax collections.Cultural facilities can also provide several qualitative benefits to the surroundingcommunity. September 21, 2018The presence of a high-quality performing arts center in Coeur d’Alenewould create additional opportunities for residents to attend andparticipate in cultural activities. Participation and arts spending analysessuggest that Coeur d’Alene households are spending less on artperformances than the average U.S. household and that significantpotential in the arts exists. A new performance venue would help the artsgrow and reach its market potential.Introduction and Executive SummaryPerforming Arts Center – Coeur d'Alene, Idaho1-2

Convention, Sports & EntertainmentFacilities ConsultingChicago, IllinoisMarket Area AnalysisCoeur d’Alene and surrounding Kootenai County enjoy high population growthrates and a strong and growing economy. The market benefits from encouragingemployment statistics and a well-diversified employment base with a number ofcorporations in a variety of industries. Coeur d’Alene is a popular touristdestination that regularly attracts visitors from surrounding cities and largepopulation centers in the region. A performing arts center would likely draw aprimary base of attendees from a drive time market of up to three hours.Coeur d’Alene’s existing entertainment and event infrastructure lacks a state-ofthe-art mid-size performance venue suitable for theatrical events, music, and otherperformances. Future planning and development efforts in Coeur d’Alene shouldconsider the interrelationship between a performing arts center, other tourismamenities, retail and dining establishments, and parking and work to improve thepedestrian connections among them.Comparable VenueAssessmentHVS analyzed 31 performing arts centers in cities throughout the western andmidwestern United States. This analysis provides a basis for building programrecommendations by comparing the function spaces and other amenities in each ofthe facilities along with other characteristics of the markets relevant to the successof the venue.HVS divided comparable performing arts centers into three categories. Performance centers in Idaho or within 300 miles of Coeur d’Alene that couldcompete with the proposed performing arts center for touring concerts andshows. Performing arts centers in small markets throughout southern Idaho andneighboring states that may compete with the proposed facility for touringconcerts and shows. New performing arts centers in smaller markets throughout North Americathat are similar to Coeur d'Alene in population and presence in their greaterregional market.HVS analyzed comparable venues shown in the figure below.September 21, 2018Introduction and Executive SummaryPerforming Arts Center – Coeur d'Alene, Idaho1-4

Convention, Sports & EntertainmentFacilities ConsultingChicago, Illinoisweddings, receptions, expositions, corporate meetings, and other group events.Several of the comparable venues house additional function spaces which allowthem to book private rentals and create a higher amenity level for patronsattending their performance events. Additional function spaces include meetingrooms, black box theaters, and art galleries.Approximately half of the comparable venues serve the needs of an educationalinstitution (college or school district) as a primary tenant. Many of the comparablevenues have a local symphony orchestra tenant. The next most common tenant is acommunity or professional theater group. Broadway theatrical series typicallybring three to six shows to a market each season. A handful of venues also serve alocal opera, ballet, or chorus.Local residents comprise a significant portion of a performance center’s primaryattendee market. Local population characteristics, therefore, can provide insightinto event and attendance potential and also provide evidence of a community’soverall economic size and ability to support public services and visitor amenitiesthat are important for theater users. For the purpose of this comparable analysis,HVS considered the one-hour drive time market surrounding each of thecomparable venues as the primary market served by the venue. When comparedto the comparable markets, the size of Coeur d’Alene’s one-hour drive-time marketpopulation is about average. Other market indices suggest that Coeur d’Aleneresidents are slightly older and have an average percentage of college graduates.Coeur d’Alene residents have below average income but spend an average amounton live entertainment events which could be presented at the Coeur d’Aleneperforming arts center.When programming the venue, primary consideration should be given to the localcultural groups that would use the proposed performing arts center. Seatingcapacity recommendations should also consider the types of touring events thatthe facility may host with the understanding that competitive venues in Spokaneand other neighboring communities would limits events booked in Coeur d’Alene.If possible, programming of the performing arts center should consider theinclusion of complementary function spaces and integrated development toimprove the event demand potential, expand the possible uses, and enhance theoverall visitor experience.User & StakeholderInterviewsSeptember 21, 2018HVS conducted a focus group with representatives from several localorganizations who could use the proposed performing arts center for their events.We also distributed a questionnaire to potential users to understand their venueneeds and potential use. These interviews and surveys helped inform buildingprogram recommendations and demand estimates.Introduction and Executive SummaryPerforming Arts Center – Coeur d'Alene, Idaho1-6

Convention, Sports & EntertainmentFacilities ConsultingChicago, Illinois Coeur d’Alene’s arts organizations face the challenge of a lack of suitablevenues for their performances. Many organizations have difficultyscheduling dates and rental fees are often too high for some groups. Rehearsal space in Coeur d’Alene is extremely limited, causing manygroups to rent office space and other non-ideal locations. Arts organizations recognize the ongoing competition from groups inSpokane as well as competition within Coeur d’Alene for funding and otherresources. Arts organizations agree a new performing arts center should have stateof-the-art acoustics, lighting, and other technical capabilities. Organizations would like to have a venue with multiple performancespaces that can accommodate varying types of performances and audiencesizes. Ample wing space, fly system, and orchestra pit are also key featuresrequired for performances. On-site rehearsal space, classrooms, and smaller studio spaces would alsobe welcome features. Other desired features include easy access, ample parking, and the abilityto generate additional revenue through food and beverage sales and otherleased spaces.Through our user questionnaire, we also asked groups about their production,audience, performer, and technical needs. Their responses help determineappropriate seating capacity, back of house, and other technical and supportsystems.To augment local group needs, we also assessed the potential for touring concertsand other entertainment and identified the types of touring shows that couldpotentially book in Coeur d’Alene.Building ProgramRecommendationsHVS developed building program recommendations for a proposed Coeur d’AlenePerforming Arts Center. The recommended facility program can serve as a guidefor subsequent physical planning aimed at providing the desired programelements.If implemented, HVS’s program recommendations would place the proposed Coeurd’Alene Performing Arts Center in a position to attract a variety of small tomedium-sized touring concerts and theatrical productions to Coeur d’Alene thatSeptember 21, 2018Introduction and Executive SummaryPerforming Arts Center – Coeur d'Alene, Idaho1-8

Convention, Sports & EntertainmentFacilities ConsultingChicago, Illinoisexisting venues cannot accommodate. The proposed venue could also serve localarts groups allowing them to present their performances in a venue with ampleseating capacity as well as superior acoustics, staging systems, back of houseaccommodations, and attendee amenities. In addition, a smaller, studioperfo

performing arts culture increases the propensity of residents to participate in the arts, which in turn increases the attractiveness of the community to residents, tourists, businesses, and investment. Since an interest in the arts is highly correlated to education level, the people that are attracted to live in communities ... 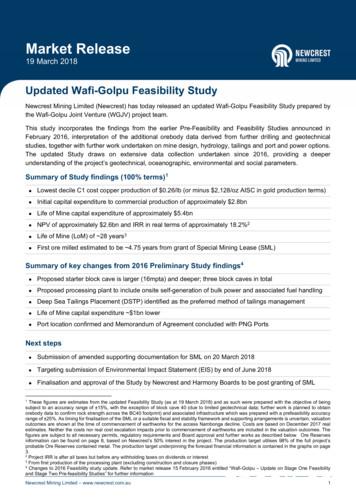 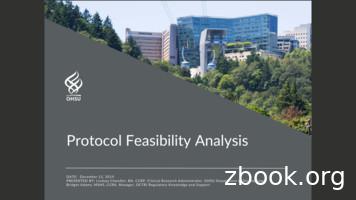 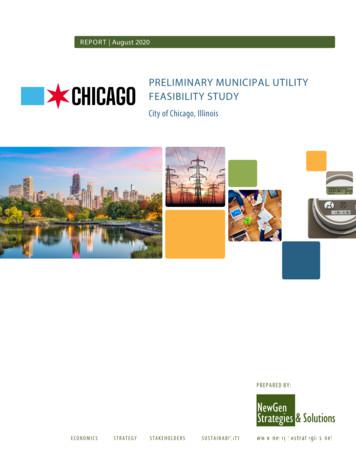 PRELIMINARY MUNICIPAL UTILITY FEASIBILITY STUDY
The intent of this Preliminary Feasibility Study (Study) is to determine if the City should continue with its efforts to establish a locally controlled municipal electric utility. This Study developed a financial feasibility analysis as well as a review of the City’s public policy
7d ago
0 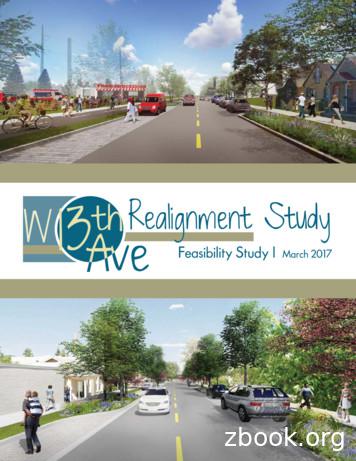 Feasibility Study March 2017
(with subconsultants Design Workshop and Zoeller Consulting) to conduct a feasibility study for the 13th Avenue and Holden Place corridors. The purpose of the study was to evaluate the technical feasibility of realigning 13th Avenue and to determine the preferred alignment. 1.1 Project Goals and Objectives
7d ago
0 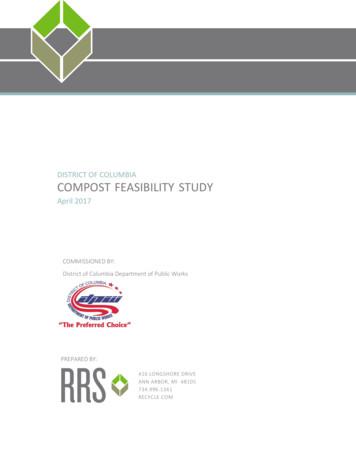 compost feasibility study - dpw
a compost collection feasibility study be conducted and gives authority to the Mayor to establish an organics collection program. This study fulfills the law [s requirement for a ompost ollection Progress and Feasibility Report. Currently, the District is composting between 5,000 and 7,000 tons of leaves collected during leaf pickup season.
7d ago
0 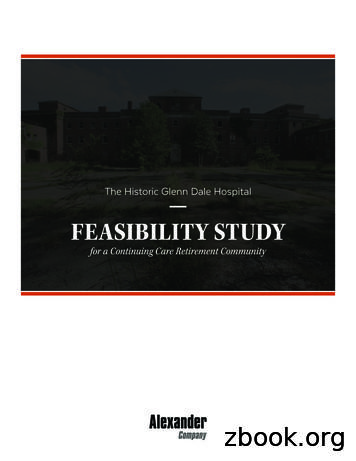 FEASIBILITY STUDY - Home - Historic Glenn Dale Hospital .
presentations on the progress of the Feasibility Study to solicit input on Feasibility Study deliverables. The following is an executive summary of the investigations, assumptions and conclusions that were made during Phase I of the agreement.
7d ago
0 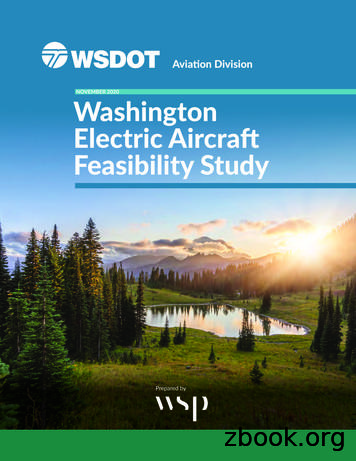 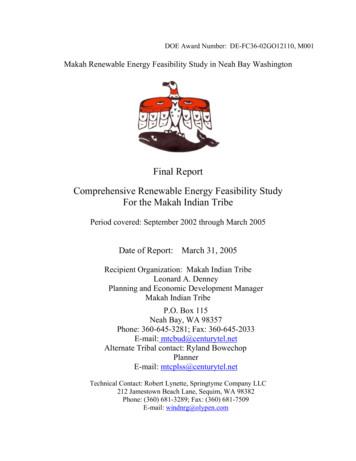 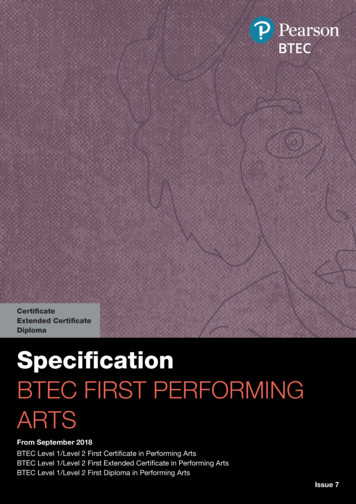 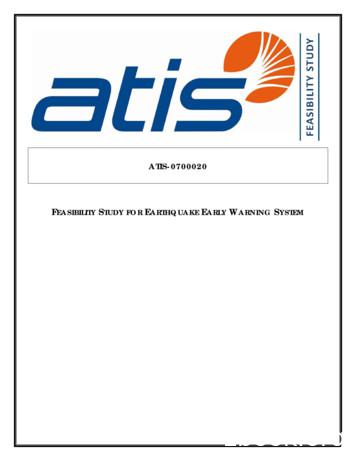 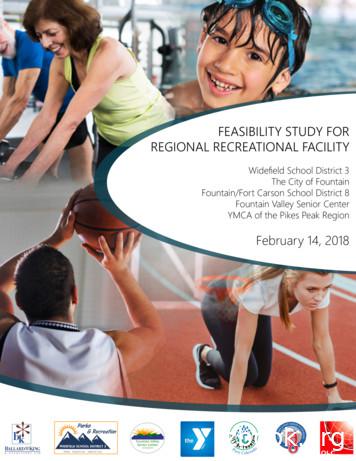 A KALEIDOSCOPE OF THE PERFORMING ARTS
The term “performing arts” refers to forms of art in which artists use their voices, bodies, or inanimate objects to convey artistic expression. The performing arts include a range of disciplines which are performed in front of a live audience. Performing arts may include dance, music, opera,
27d ago
5
Popular Tags
Recent Views