THE ICCF LAWS OF CORRESPONDENCE CHESS* Table Of Contents . 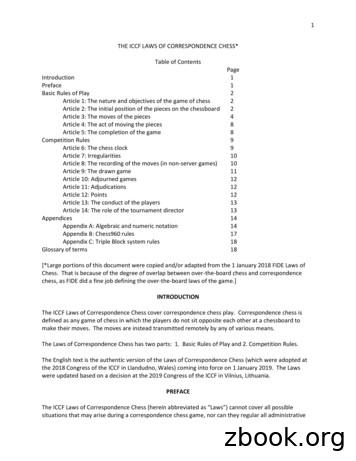 1THE ICCF LAWS OF CORRESPONDENCE CHESS*Table of ContentsIntroductionPrefaceBasic Rules of PlayArticle 1: The nature and objectives of the game of chessArticle 2: The initial position of the pieces on the chessboardArticle 3: The moves of the piecesArticle 4: The act of moving the piecesArticle 5: The completion of the gameCompetition RulesArticle 6: The chess clockArticle 7: IrregularitiesArticle 8: The recording of the moves (in non-server games)Article 9: The drawn gameArticle 10: Adjourned gamesArticle 11: AdjudicationsArticle 12: PointsArticle 13: The conduct of the playersArticle 14: The role of the tournament directorAppendicesAppendix A: Algebraic and numeric notationAppendix B: Chess960 rulesAppendix C: Triple Block system rulesGlossary of ge portions of this document were copied and/or adapted from the 1 January 2018 FIDE Laws ofChess. That is because of the degree of overlap between over-the-board chess and correspondencechess, as FIDE did a fine job defining the over-the-board laws of the game.]INTRODUCTIONThe ICCF Laws of Correspondence Chess cover correspondence chess play. Correspondence chess isdefined as any game of chess in which the players do not sit opposite each other at a chessboard tomake their moves. The moves are instead transmitted remotely by any of various means.The Laws of Correspondence Chess has two parts: 1. Basic Rules of Play and 2. Competition Rules.The English text is the authentic version of the Laws of Correspondence Chess (which were adopted atthe 2018 Congress of the ICCF in Llandudno, Wales) coming into force on 1 January 2019. The Lawswere updated based on a decision at the 2019 Congress of the ICCF in Vilnius, Lithuania.PREFACEThe ICCF Laws of Correspondence Chess (herein abbreviated as “Laws”) cannot cover all possiblesituations that may arise during a correspondence chess game, nor can they regular all administrative

2questions. Where cases are not precisely regulated by an article of the Laws, it should be possible toreach a correct decision by studying analogous situations which are regulated in the Laws. The Lawsassume that tournament directors have the necessary competence, sound judgement and absoluteobjectivity. Too detailed a rule might deprive the tournament director of the freedom of judgement andthus prevent the tournament director from finding a solution to a problem dictated by fairness, logicand special factors. ICCF appeals to all chess players and federations to accept this view. A necessarycondition for a game to be rated by the ICCF is that it shall be played according to the ICCF Laws ofCorrespondence Chess. It is recommended that competitive games not rated by the ICCF be playedaccording to the ICCF Laws.Member federations may ask the ICCF to give a ruling on matters relating to the Laws.BASIC RULES OF PLAYArticle 1: The nature and objectives of the game of chess1.1 The game of chess is played between two opponents who move their pieces alternately on a squareboard called a ‘chessboard’. The player with the white pieces commences the game. A player is said to‘have the move’, when the opponent’s move has been ‘made’. (See Article 4.1)1.2 The objective of each player is to place the opponent’s king ‘under attack’ in such a way that theopponent has no legal move. The player who achieves this goal is said to have ‘checkmated’ theopponent’s king and to have won the game. Leaving one’s own king under attack, exposing one’s ownking to attack and also ’capturing’ the opponent’s king are not allowed. The player whose king has beencheckmated has lost the game.1.3 If the position is such that neither player can possibly checkmate, the game is drawn.Article 2: The initial position of the pieces on the chessboard2.1 The chessboard is composed of an 8 x 8 grid of 64 equal squares alternately light (the ‘white’squares) and dark (the ‘black’ squares).2.2 The chessboard is viewed as placed between the players in such a way that the near corner squareto the right of the player is white.

42.4 The eight vertical columns of squares are called ‘files’. The eight horizontal rows of squares arecalled ‘ranks’. A straight line of squares of the same colour, running from one edge of the board to anadjacent edge, is called a ‘diagonal’.Article 3: The moves of the pieces3.1 It is not permitted to move a piece to a square occupied by a piece of the same colour.3.1.1 If a piece moves to a square occupied by an opponent’s piece the latter is captured as part of thesame move.3.1.2 A piece is said to attack an opponent’s piece if the piece could make a capture on that squareaccording to Articles 3.2 to 3.8.3.1.3 A piece is considered to attack a square even if this piece is constrained from moving to thatsquare because it would then leave or place the king of its own colour under attack.3.2 The bishop may move to any square along a diagonal on which it stands.3.3 The rook may move to any square along the file or the rank on which it stands.3.4 The queen may move to any square along the file, the rank or a diagonal on which it stands.

53.5 When making these moves, the bishop, rook or queen may not move over any intervening pieces.3.6 The knight may move to one of the squares nearest to that on which it stands but not on the samerank, file or diagonal.3.7.1 The pawn may move forward to the square immediately in front of it on the same file, providedthat this square is unoccupied, or3.7.2 on its first move the pawn may move as in 3.7.1 or alternatively it may advance two squares alongthe same file, provided that both squares are unoccupied, or3.7.3 the pawn may move to a square occupied by an opponent’s piece diagonally in front of it on anadjacent file, capturing that piece.

63.7.4.1 A pawn occupying a square on the same rank as and on an adjacent file to an opponent’s pawnwhich has just advanced two squares in one move from its original square may capture this opponent’spawn as though the latter had been moved only one square.3.7.4.2 This capture is only legal on the move following this advance and is called an ‘en passant’capture.3.7.5.1 When a player, having the move, plays a pawn to the rank furthest from its starting position, theplayer must exchange that pawn as part of the same move for a new queen, rook, bishop or knight ofthe same colour on the intended square of arrival. This is called the square of ‘promotion’.3.7.5.2 The player's choice is not restricted to pieces that have been captured previously.3.7.5.3 This exchange of a pawn for another piece is called promotion, and the effect of the new piece isimmediate.3.8 There are two different ways of moving the king:3.8.1 by moving to an adjoining square3.8.2 by ‘castling’. This is a move of the king and either rook of the same colour along the player’s firstrank, counting as a single move of the king and executed as follows: the king is transferred from itsoriginal square two squares towards the rook on its original square, then that rook is transferred to thesquare the king has just crossed.

7Before white kingside castling After white kingside castlingBefore black queenside castling After black queenside castlingBefore white queenside castling After white queenside castlingBefore black kingside castlingAfter black kingside castling3.8.2.1 The right to castle has been lost:3.8.2.1.1 if the king has already moved, or3.8.2.1.2 with a rook that has already moved.3.8.2.2 Castling is prevented temporarily:3.8.2.2.1 if the square on which the king stands, or the square which it must cross, or the square whichit is to occupy, is attacked by one or more of the opponent's pieces, or3.8.2.2.2 if there is any piece between the king and the rook with which castling is to be conducted.3.9.1 The king is said to be 'in check' if it is attacked by one or more of the opponent's pieces, even ifsuch pieces are constrained from moving to the square occupied by the king because they would thenleave or place their own king in check.3.9.2 No piece can be moved that will either expose the king of the same colour to check or leave thatking in check.3.10.1 A move is legal when all the relevant requirements of Articles 3.1 – 3.9 have been fulfilled.3.10.2 A move is illegal when it fails to meet the relevant requirements of Articles 3.1 – 3.9. In practice,a player can only designate an illegal move in postal, email or fax events, as illegal moves are notallowed by the server.3.10.3 A position is illegal when it cannot have been reached by any series of legal moves. This can onlypotentially occur in postal, email or fax events, as the server does not allow illegal positions to occur.

107.2 If during a non-server game, it is found that an illegal move has been completed, the positionimmediately before the irregularity shall be reinstated. The game shall then continue from this reinstatedposition and guilty player shall be penalized.Article 8: The recording of the moves (in non-server games)8.1 Making a record of the game is required:8.1.1 In the course of play each player is required to record the player’s own moves and those of theopponent in the correct manner, move after move, as clearly and legibly as possible, in the numeric or amutually agreed notation8.1.2 While the game is in progress, the player may use a physical scoresheet instead of or in addition toan electronic copy.8.1.3 The scoresheet shall be used only for recording the moves, the times spent, offers of a draw, mattersrelating to a claim and other relevant data.8.1.4 Players must record the offer of a draw on the scoresheet with a symbol ( ).8.1.5 If a player is unable to keep score, an assistant should be used by the player to write the moves8.2 The scoresheet shall be made available to the tournament director upon request at any time duringthe game.8.3 If no complete scoresheet is available, the players must reconstruct the game. Each player shall firstrecord the actual game position, clock times, whose clock was running and the number of movesmade/completed, if this information is available, before reconstruction takes place.8.4 If the scoresheets cannot be brought up to date showing that a player has overstepped the allottedtime, the next move made shall be considered as the first of the following time period, unless there isevidence that more moves have been made or completed.8.5 At the conclusion of the game both players shall send a PGN file to the tournament director indicatingthe result of the game. Even if incorrect, this result shall stand, unless the tournament director decidesotherwise.Article 9: The drawn game9.1 Regulations concerning a draw:9.1.1 The regulations of an event may specify that players cannot offer or agree to a draw in less than aspecified number of moves.9.1.2 However, if the regulations of an event allow a draw agreement the following shall apply:9.1.2.1 A player wishing to offer a draw shall do so either via the ICCF server (in server-based games) orby clearly expressing the player’s intention to offer a draw (in non-server games). This shall be done whena move is submitted. The offer cannot be withdrawn and remains valid until the opponent accepts or,rejects it, or the opponent's clock runs down to zero.9.1.2.2 A claim of a draw under Article 9.2 or 9.3 shall be considered to be an offer of a draw.9.2 The claim of a draw:

1212.1 Unless the regulations of an event specify otherwise, a player who wins a game, or wins by forfeit,scores one point (1), a player who loses a game, or forfeits, scores no points (0), and a player who drawsa game scores a half point (½).12.2 The total score of any game can never exceed the maximum score normally given for that game.Scores given to an individual player must be those normally associated with

Where cases are not precisely regulated by an article of the Laws, it should be possible to reach a correct decision by studying analogous situations which are regulated in the Laws. The Laws assume that tournament directors have the necessary competence, sound judgement and absolute

Nonprofit Self-Assessment Checklist
May 02, 2018 · D. Program Evaluation ͟The organization has provided a description of the framework for how each program will be evaluated. The framework should include all the elements below: ͟The evaluation methods are cost-effective for the organization ͟Quantitative and qualitative data is being collected (at Basics tier, data collection must have begun)
2m ago
305 Views