Chapter 1: POLITICS: Who Gets What, When, And How 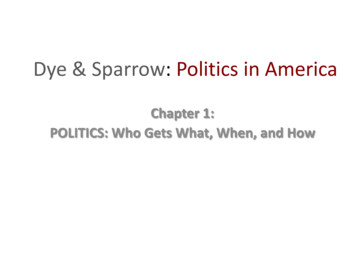 Dye & Sparrow: Politics in AmericaChapter 1:POLITICS: Who Gets What, When, and How

Questions about politics:1) When you see the word “politics” whatcomes to mind?2) What words pop into your head?*Here’s what pops into mine

I’m joking obviously BUT it doesget you thinking right? LOLWhat comes to your mind whenthinking of that word?

Politics and Political ScienceWhat is politics?According to Dye (p3) it is “the process which determineswho gets what, when and how” (H. Lasswell)Questions Political Scientists study-Who governs?-By what means?-For what ends?Take away quote: ‘‘The study of politics is the study of influence and theinfluential. . . .The influential are those who get the most of what there is toget. Those who get the most are elite; the rest are mass.”Harold Lasswell

Who Participates in Governing?

When & How: Governing Institutions

When & How: Processes of Governing

Question: What is government?a. Dye (p 5) says it is an “organization extending tothe whole society that can legitimately use force tocarry out its decisions”B. Turetzky says government is an “institution thatmakes and enforces the law.” He adds that it “has amonopoly on the use of force and that forcesometimes has to be used to enforce the law”

Purposes of GovernmentWhat are the purposes of government?*In the Preamble to the Constitution, theFounding Fathers created a pretty goodlist 1. To establish justice and insure domestictranquility2. To provide for the common defense

Purposes of GovernmentWhat are the purposes of government?3. To promote the general welfare4. To secure the blessings of liberty

Power-Some questions Question 1:-What is power? Why is it so essential in politics?Answer:-Dye essentially says it is the ability to control andshape events. To get someone to do what theywouldn’t ordinarily do This is where government comes in. It has thePOWER to force you to do what you don’t want todo we grant governments this power

Question: do you guys see anytension or potential problems withgovernments having the power tomake and enforce laws?

Who is really in charge?One of the central arguments in the field of political science centers on who is really in charge of thesystem, who really has the power. Some say that elites have all the power, whilst others say the peopleexercise power through group competition. Lets take a quick look at these perspectives The Elitist PerspectiveWhat is the Elitist Perspective?-Dye (p 17): It is a “political system in which power is concentratedin the hands of a relatively small group of individuals or institutions”According to Dye, Elitism is characterized by:-An elite being inevitable in any social organization-The “few” having the power and the “many” not having it. Elites make decisions, notthe many-Only a few thousand people directly participating in decisions about war, taxes,employment, etc (Dye, p16)-Elite status being open to talented people and the idea that elites aren’t JUST selfserving

The Pluralist PerspectiveWhat is the pluralist perspective?-Dye (p18): It is the idea “that democracy can beachieved through competition among multipleorganized groups and that individuals can participatein politics through group memberships and elections”Pluralism ischaracterized by: Competition Bargaining Compromise

Discussion Question: Is America run by afew big interests looking out only forthemselves or is it run for the benefit ofall the people? That is, who is really incharge?

3) Protections against the potential for themajority to oppress the minority include:a. checks and balancesb. separation of powersc. federalismd. all of the above

4) The idea that all societies are dividedinto the few who have power and themany that do not would be consistent witha. pluralismb. classical liberalismc. interest group theoryd. elitism

Politics and Political Science . What is politics? According to Dye (p3) it is “the process which determines who gets what, when and how” (H. Lasswell) Questions Political Scientists study -Who governs? -By what means? -For what ends? Take away quote: ‘‘The study of politics is the study of influence and the influential. . . .

CHAPTER ONE What is Politics
What is Politics? CHAPTER OVERVIEW This initial chapter introduces and defines politics and applies it to America's government. In Lasswell's famous definition, politics is "the process of who gets what, when, and how." In other words, the text's definition of politics "centers on actions among a number of people
8m ago
27 Views

Politics - Whitman College
Politics 121 is not a prerequisite for Politics 122. 124 Introduction to Politics and the Environment Spring Brick 4 credits An introduction to key concepts in the study of politics using environmental issues as illustrations. Designed for first- and second-year students, this course encourages critical thinking and writing about such political .
8m ago
37 Views

New York Times - Tyndale House
Contents Introduction xi THE EXODUS: A Quick Review xvii CHAPTER 1: Breathtaking Beauty 1 CHAPTER 2: How Slavery Starts 9 CHAPTER 3: Tiny Little Spider Bites 15 CHAPTER 4: What Pain Can Do 25 CHAPTER 5: Unlearning 33 CHAPTER 6: There’s a Pharaoh in All of Us 43 CHAPTER 7: It Gets Worse before It Gets Better 55 CHAPTER 8: The Wild Gospel and Living in Deserts 63
24d ago
0 Views

What is Politics?
Politics exists because people disagree. For Aristotle, politics is ‘nothing less than the activity through which human beings attempt to improve their lives and create the Good Society. Politics is a social activity. It is always a dialogue, and never a monologue.
8m ago
37 Views
Popular Tags
Recent Views