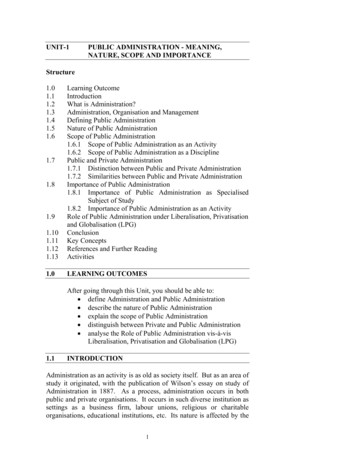 sphere with which it is concerned. Administration is commonly dividedinto two types, Public and Private Administration. As an aspect ofgovernment activity it has existed since the emergence of politicalsystem(s). While public administration relates to the activities carriedout by government, private administration refers to the management ofprivate business enterprises.It is important to understand the functioning of administration for onthis lies the understanding of the government. In this Unit an effort hasbeen made to bring the concept of administration, public administrationin particular, closer to you. This understanding will take you through theentire course of Public Administration. In what follows, we willexamine the meaning, nature and scope of public administration.1.2WHAT IS ADMINISTRATION?The word ‘administer’ is derived from the Latin word administere,which means to care for or to look after people, to manage affairs.Administration may be defined as “group activity which involvescooperation and coordination for the purpose of achieving desired goalsor objectives”.Broadly speaking, the term administration appears to bear at least fourdifferent meanings or different senses depending upon the context inwhich it is used:(1)As a Discipline: The name of a branch of learning or intellectualdiscipline as taught and studied in colleges and universities.(2)As a Vocation: Type of work/trade or profession/occupation,especially one that involves knowledge and training in a branchof advance learning.(3)As a Process: The sum total of activities undertaken toimplement Public Policy or policies to produce some services orgoods.(4)As a Synonym for 'word' Executive or Government: Such otherbody of persons in supreme charge of affairs, for example,Manmohan Singh Administration, Bush Administration, etc.Noted below are definitions by a few famous writers.E.N. Gladden“Administration is a long and slightly pompous word, but it has ahumble meaning, for it means to care for or look after people, to2

group effort, public or private, civil or military, large scale or smallscale. It is process at work in a department store, a bank, a university, ahigh school, a railroad, a hospital, a hotel or a local government.1.3ADMINISTRATION, ORGANISATION ANDMANAGEMENTBefore we discuss about the meaning, definition, nature, scope andimportance of public administration we will try to know what isadministration, organisation and management. As these terms are oftenused interchangeably and synonymously, it is pertinent to know thedifferences and distinctions between these three terms.According to William Schulze Administration is the force, which laysdown the object for which an organisation and its management are tostrive and the broad policies under which they are to operate.An Organisation is a combination of the necessary human beings,materials, tools, equipment and working space, appurtenances broughttogether in systematic and effective co-relation to accomplish somedesired object.Management is that which leads guides and directs an organisation forthe accomplishment of pre-determined object.To put the above in simple terms, administration sets the goal,management strives to attain it and organisation is the machine of themanagement for the attainment of the ends determined by theadministration.Some scholars have a different view about the administration andmanagement. According to Peter Drucker management is associatedwith the business activity, which has to show economic performance,whereas administration is associated with the non business activitieslike activities of the Government.The other view is that administration is associated with performingroutine things in known settings in accordance with certain procedures,rules, and regulations. The Management is associated with performingfunctions like risk taking, dynamic, creative and innovative functions.Some scholars of Public Administration are closely associated with thefirst view that is, administration is a determinative function.Management, on other hand is an executive function that is primarilyconcerned with carrying out the broad policies laid down by theadministration. Organisation is the machinery through whichcoordination is established between administration and management.4

1.4DEFINING PUBLIC ADMINISTRATIONL.D. White observes that although public administration varies in formand objects, and although the administration of public and privateaffairs differs at many points, there is an underlying similarity, if notidentity. As an integral aspect of such generic concept, publicadministration could be related to that type of administration, whichoperates within a specific ecological setting. It is a means to carry outthe policy decisions made by political executive.To be seen along with it is the ‘Public’ aspect of Public administration,which attributes a special character and focus to it. ‘Public’ can belooked at formally to mean ‘government’. So, public administration isgovernment administration, government in action, or a socio-economicand politico-administrative confluence, the focus being especially onpublic bureaucracy.Encyclopaedia Britannica defines publicadministration as ‘the application of a policy of a state through itsgovernment.’Public Administration, therefore, refers to that part of administration,which pertains to the administrative activities of the government.Now we will try to look into the definitions of Public Administrationprovided by various scholars.Woodrow WilsonPublic administration is the detailed and systematic application of law.Every particular application of law is an act of administration.L.D. White“Public administration consists of all those operations having for theirpurpose the fulfilment or enforcement of public policy”. As per White,this definition covers a multitude of particular operations in many fieldsthe delivery of a letter, the sale of public land, the negotiation of atreaty, the award of compensation to an injured workman, thequarantine of a sick child, the removal of litter from a park,manufacturing uranium 235, and licensing the use of atomic energy. Itincludes military as well as civil affairs, much of the work of courts, andall the special fields of government activity-police, education, health,construction of public works, conservation, social security, and manyothers. The conduct of public affairs in advanced civilisations requiresthe employment of almost every profession and skill-engineering, law,medicine, and teaching; the crafts, the technical specialties, the officeskills, and many others.5

“Public Administration is concerned with ‘what’ and ‘how’ of thegovernment. The ‘what’ is the subject matter, the technical knowledgeof a field, which enables the administrator to perform his tasks. The‘how’ is the technique of management, the principles according towhich co-operative programmes are carried through to success. Each isindispensable, together they form the synthesis called administration”.Nicholas Henry“Public Administration is a broad-ranging and amorphous combinationof theory and practice; its purpose is to promote a superiorunderstanding of government and its relationship with the society, itgoverns, as well as to encourage public policies more responsive tosocial needs and to institute managerial practices attuned toeffectiveness, efficiency and the deeper human requisites of thecitizenry”.The traditional definitions of Public Administration, which are givenabove reflect the view that the Public Administration is only involved incarrying out the policies and programmes of the government. It reflectthat it has no role in policy making and also locates the administrationin the executive branch but today the term public administration is usedin a broader sense that it is not only involved in carrying out theprogrammes of the government, but it also plays an important role inpolicy formulation and covers the three branches of the government. Inthis context, we may reflected on the definition offered by F.A. Nigroand L.G. Nigro. According to them Public Administration:In this context we can reflect the definition offered by F.A. Nigro andL.G. Nigro. According to them Public Administration: is co-operative group effort in a public setting;covers all three branches-executive, legislative, and judicial, andtheir inter-relationships;has an important role in the formulation of public policy and isthus a part of the political process;is different in significant ways from private administration; andis closely associated with numerous private groups andindividuals in providing services to the community”.In sum, public administration: is the non-political public bureaucracy operating in a politicalsystem;deals with the ends of the State, the sovereign will, the publicinterests and laws;7

Organisation means the establishment of the formal structure ofauthority through which the work is sub-divided, arranged, defined andcoordinated.Staffing means the recruitment and training of the personnel and theirconditions of work.Directing means making decisions and issuing orders and instructions.Coordinating means inter-relating the work of various divisions,sections and other parts of the organisation.Reporting means informing the superiors within the agency to whomthe executive is responsible about what is going on.Budgeting means fiscal planning, control and accounting.According to Gullick the POSDCoRB activities are common to allorganisations. They are the common problems of management whichare found in different agencies regardless of the nature of the work theydo.POSDCoRB gives unity, certainty, and definiteness and makes thestudy more systematic. The critics pointed out that the POSDCoRBactivities were neither the whole of administration, nor even the mostimportant part of it. The POSDCoRB view over looks the fact thatdeferent agencies are faced with different administrative problems,which are peculiar to the nature of the services, they render and thefunctions they performed.The POSDCoRB view takes intoconsideration only the common techniques of the administration andignores the study of the ‘subject matter’ with which the agency isconcerned. A major defect is that the POSDCoRB view does notcontain any reference to the formulation and implementation of thepolicy. Therefore, the scope of administration is defined very narrowly,being too inward looking and too conscious of the top management.The Subject Matter ViewW