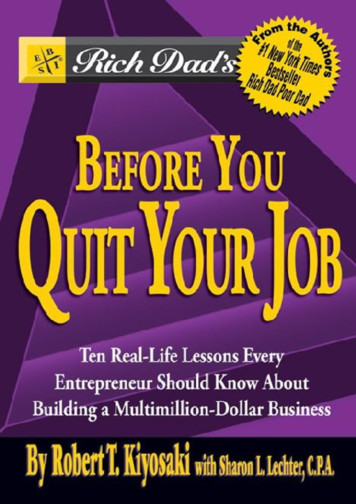 AcknowledgmentsEntrepreneurship is as much a spirit as it is a vocation. When Rich Dadpartnered with Warner Books it was in large part due to Laurence Kirshbaum,Warner’s CEO and Chairman. We recognized that entrepreneurial spark in hiseyes. He energized his “Can Do” attitude throughout the entire organization.While publishing may not be a cutting-edge industry, Larry Kirshbaum is acutting-edge leader and has been a joy to work with. Thank you, Larry.Robert KiyosakiSharon LechterOceanofPDF.com

IntroductionWhat Makes Entrepreneurs Different?One of the most frightening days of my life was the day I quit my job andofficially became an entrepreneur. On that day I knew there were no moresteady paychecks, no more health insurance or retirement plan. No more daysoff for being sick or paid vacations.On that day, my income went to zero. The terror of not having a steadypaycheck was one of the most frightening experiences I had ever experienced.Worst of all, I did not know how long it would be before I would have anothersteady paycheck . . . it might be years. The moment I quit my job I knew thereal reason why many employees do not become entrepreneurs. It is fear ofnot having any money . . . no guaranteed income . . . no steady paycheck.Very few people can operate for long periods of time without money.Entrepreneurs are different, and one of those differences is the ability tooperate sanely and intelligently without money.On that same day, my expenses went up. As an entrepreneur, I had to rentan office, a parking stall, a warehouse, buy a desk, a lamp, rent a phone, payfor travel, hotels, taxis, meals, copies, pens, paper, staples, stationery, legaltablets, postage, brochures, products, and even coffee for the office. I also hadto hire a secretary, an accountant, an attorney, a bookkeeper, a businessinsurance agent, and even a janitorial service. These were all expenses myemployer had once paid for me. I began to realize how expensive it had beento hire me as an employee. I realized that employees cost far more than thenumber of dollars reflected in their paychecks.So another difference between employees and entrepreneurs is thatentrepreneurs need to know how to spend money, even if they have no money.

The Start of a New LifeThe day I officially left the company, I was in San Juan, Puerto Rico. It wasJune 1978. I was in Puerto Rico because I was attending the XeroxCorporation’s President’s Club celebration, an event recognizing the topachievers in the company. People had come from all over the world to berecognized.It was a great event, a gala I will always remember. I could not believehow much money Xerox was spending just to recognize the top salespeople inthe company. But even though it was a celebration, I was having a miserabletime. Throughout the three-day event, all I could think about was leaving thejob, the steady paycheck, and the security of the company. I realized that oncethe party in San Juan was over, I was going to go on my own. I was not goingback to work at the Honolulu Branch Office or the Xerox Corporation.When leaving San Juan, the plane I was on experienced some kind ofemergency. In preparing to land at Miami, the pilot had us all brace, cradleour heads, and prepare for a possible crash. I was already feeling bad enoughabout this being my first day as an entrepreneur, but now I had to prepare todie on top of it? My first day as an entrepreneur was not off to a very goodstart.Obviously, the plane did not crash, and I flew on to Chicago where I wasgoing to do a sales presentation for my line of nylon surfer wallets. I arrivedat the Chicago Mercantile Mart late because of the flight delays, and the clientI was supposed to meet, a buyer from a large chain of department stores, wasalready gone. Once again I thought to myself, “This is not a good way to startmy new career as an entrepreneur. If I don’t make this sale there will be noincome for the business, no paycheck for me, no food on the table.” Since Ilike to eat, having no food disturbed me the most.Are Some People Born Entrepreneurs?“Are people born entrepreneurs or are they trained to be entrepreneurs?”When I asked my rich dad his opinion on this age-old question, he said,“Asking if people are born or trained to be entrepreneurs is a question thatmakes no sense. It would be like asking if people are born employees ortrained to become employees?” He went on to say, “People are trainable.They can be trained to be either employees or entrepreneurs. The reason thereare more employees than entrepreneurs is simply that our schools train youngpeople to become employees. That is why so many parents say to their child,

‘Go to school so you can get a good job.’ I have yet to hear any parent say,‘Go to school to become an entrepreneur.’”Employees Are a New PhenomenonThe employee is a rather new phenomenon. During the agrarian age, mostpeople were entrepreneurs. Many were farmers who worked the king’s lands.They did not receive a paycheck from the king. In fact, it was the other wayaround. The farmer paid the king a tax for the right to use the land. Thosewho were not farmers were tradespeople, aka small business entrepreneurs.They were butchers, bakers, and candlestick makers. Their last names oftenreflected their business. That is why today many people are named Smith, forthe village blacksmith; Baker, for bakery owners; and Farmer, because theirfamily’s business was farming. They were entrepreneurs, not employees.Most children who were raised in entrepreneurial families followed in theirparents’ footsteps, also becoming entrepreneurs. Again, it is just a matter oftraining.It was during the Industrial Age that the demand for employees grew. Inresponse, the government took over the task of mass education and adoptedthe Prussian system, upon which most Western school systems in the worldare today modeled. When you research the philosophy behind Prussianeducation, you will find that the stated purpose was to produce soldiers andemployees . . . people who would follow orders and do as they were told. ThePrussian system of education is a great system for mass-producing employees.It is a matter of training.The Most Famous EntrepreneursYou may also have noticed that many of our most famous entrepreneurs didnot finish school. Some of those entrepreneurs are Thomas Edison, founder ofGeneral Electric; Henry Ford, founder of Ford Motor Company; Bill Gates,founder of Microsoft; Richard Branson, founder of Virgin; Michael Dell,founder of Dell Computers; Steven Jobs, founder of Apple Computers andPixar; and Ted Turner, founder of CNN. Obviously, there are otherentrepreneurs who did well in school . . . but few are as famous as these.

The Transition from Employee to EntrepreneurI know I was not born a natural entrepreneur. I had to be trained. My rich dadguided me through a process of starting as an employee to eventuallybecoming an entrepreneur. For me, it was not an easy process. There was a lotI had to unlearn before I could begin to understand the lessons he was tryingto teach me.It was difficult hearing what my rich dad had to say because what he saidwas exactly opposite from the lessons my poor dad was trying to teach me.Every time my rich dad talked about entrepreneurship, he was talking aboutfreedom. Every time my poor dad talked to me about going to school to get ajob, he was talking about security. There was the clash of these twophilosophies going on in my head and it was confusing me.Finally I asked rich dad about the difference in philosophies. I asked,“Aren’t security and freedom the same thing?”Smiling, he replied, “Security and freedom are not the same . . . in factthey are opposites. The more security you seek, the less freedom you have.The people with the most security are in jail. That is why it is calledmaximum security.” He went on to say, “If you want freedom you need to letgo of security. Employees desire security and entrepreneurs seek freedom.”So the question is, can anyone become an entrepreneur? My answer is,“Yes. It begins with a change in philosophy. It begins with a desire for morefreedom than security.”From Caterpillar to ButterflyWe all know that a caterpillar spins a cocoon and one day emerges asbutterfly. It is a change so profound, it is known as a metamorphosis. One ofthe definitions of metamorphosis is a striking alteration in character. Thisbook is about a similar metamorphosis. This book is about the changes aperson goes through, when transitioning from employee to entrepreneur.While many people dream of quitting their job and starting their ownbusiness, only a few actually do it. Why? Because the transition fromemployee to entrepreneur is more than changing jobs . . . it is a truemetamorphosis.Entrepreneur Books Written by Nonentrepreneurs

Over the years, I have read many books about entrepreneurs and on thesubject of entrepreneurship. I studied the lives of such entrepreneurs asThomas Edison, Bill Gates, Richard Branson, and Henry Ford. I also readbooks on different entrepreneurial philosophies and what makes someentrepreneurs better than others. In every book, good or bad, I found somepriceless bit of information or wisdom that has helped me in my quest tobecome a better entrepreneur.Looking back at the books I have read, I noticed that they fall into twobasic categories: books written by entrepreneurs and books written bynonentrepreneurs. Most of the books are written by nonentrepreneurs, peoplewho are professional authors, journalists, or college professors.While I have gotten something important from every book, regardless ofwho wrote it, I did find something missing. What I found missing was the“down in the gutter,” “kick in the gut,” “stabbed in the back,” terrifyingmistakes and horror stories that almost every entrepreneur goes through. Mostof the books paint a picture of the entrepreneur as a brilliant, suave, coolbusinessperson who handled every challenge with ease. The books aboutgreat entrepreneurs often make it sound like they were born entrepreneurs,and granted, many of them were. Just as there are natural and gifted athletes,there are natural and gifted entrepreneurs, and most books are written aboutsuch people.Books on entrepreneurship written by college professors have a differentflavor. College professors tend to boil the subject to the bone, leaving only thestatic facts or findings. I find reading such technically correct books difficultbecause the reading is often boring. There is no meat left, nothing juicy, justthe bones.

How This Book Is DifferentThis is a book about entrepreneurship, written by entrepreneurs who haveexperienced the ups and downs, the successes and failures, of the real world.Today The Rich Dad Company is an international business with productsin forty-four different languages, doing business in over eighty countries. Butit all started as a company that my wife, Kim, and I started with our partnerSharon Lechter. It began on Sharon’s dining room table in 1997. Our initialinvestment was 1,500. Our first book, Rich Dad Poor Dad, has been on theNew York Times Best Seller List for over four and a half years,

COUNTRY: BRUNEI DARUSSALAM A. COPYRIGHT i) Introduction
registration in Brunei Darussalam. ii) Arrangement of Sections Part I - deals with subsistence, ownership and duration of copyright which cover areas on rights of the copyright owner, acts permitted to copyright works, moral rights, dealing with rights in copyright works, remedies for infringement,
6m ago
20 Views

Federal Copyright Protection for Pre-1972 Sound Recordings
The Report recommends that federal copyright protection should apply to sound recordings fixed before February 15, 1972. It proposes special provisions to address issues such as copyright ownership, term of protection, termination of transfers and copyright registration.
5m ago
9 Views

COPYRIGHT LAW BASICS FOR PHOTOGRAPHY-UNITED STATES .
notice no longer places the work in the public domain, it is still advisable to use a copyright notice with published works to inform users that your work is protected by copyright and to include copyright ownership in the metadata fields of digital photographs.
5m ago
11 Views

GRADE 7 READING Administered April 2009
Page 9 GO ON 12 The reader can conclude that when Michael sees Robert’s tuba case, he — F thinks Robert will want to learn to play other instruments G thinks Robert will have to return to band practice H wants to help Robert carry the instrument J hopes to play music with Robert 11 Michael first realizes Ca
2m ago
8 Views