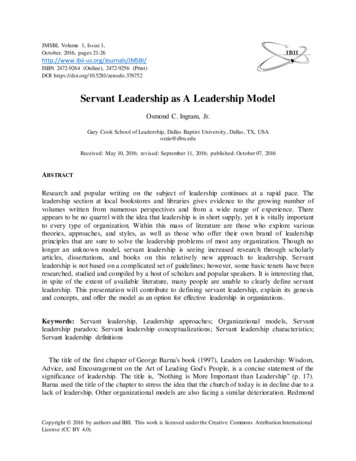 JMSBI, Volume 1, Issue 1,October. 2016, pages 21-26http://www.ibii-us.org/Journals/JMSBI/ISBN 2472-9264 (Online), 2472-9256 (Print)DOI https://doi.org/10.5281/zenodo.376752Servant Leadership as A Leadership ModelOsmond C. Ingram, Jr.Gary Cook School of Leadership, Dallas Baptist University, Dallas, TX, [email protected]: May 10, 2016; revised: September 11, 2016; published: October 07, 2016ABSTRACTResearch and popular writing on the subject of leadership continues at a rapid pace. Theleadership section at local bookstores and libraries gives evidence to the growing number ofvolumes written from numerous perspectives and from a wide range of experience. Thereappears to be no quarrel with the idea that leadership is in short supply, yet it is vitally importantto every type of organization. Within this mass of literature are those who explore varioustheories, approaches, and styles, as well as those who offer their own brand of leadershipprinciples that are sure to solve the leadership problems of most any organization. Though nolonger an unknown model, servant leadership is seeing increased research through scholarlyarticles, dissertations, and books on this relatively new approach to leadership. Servantleadership is not based on a complicated set of guidelines; however, some basic tenets have beenresearched, studied and compiled by a host of scholars and popular speakers. It is interesting that,in spite of the extent of available literature, many people are unable to clearly define servantleadership. This presentation will contribute to defining servant leadership, explain its genesisand concepts, and offer the model as an option for effective leadership in organizations.Keywords: Servant leadership, Leadership approaches; Organizational models, Servantleadership paradox; Servant leadership conceptualizations; Servant leadership characteristics;Servant leadership definitionsThe title of the first chapter of George Barna's book (1997), Leaders on Leadership: Wisdom,Advice, and Encouragement on the Art of Leading God's People, is a concise statement of thesignificance of leadership. The title is, "Nothing is More Important than Leadership" (p. 17).Barna used the title of the chapter to stress the idea that the church of today is in decline due to alack of leadership. Other organizational models are also facing a similar deterioration. RedmondCopyright 2016 by authors and IBII. This work is licensed under the Creative Commons Attribution InternationalLicense (CC BY 4.0).

22O. Ingram / Journal of Management Science and Business Intelligence 2016 1(1) 21-26proposed that “needs of people would be met easier and more efficiently and with less„management‟ if there were more leaders seeking to serve others” (Redmond, 1995, p. 30).This paper will examine servant leadership from a variety of viewpoints. The volume ofresearch into servant leadership as a viable model of leadership is increasing each year. Servantleadership is a relatively popular topic for many dissertations in a variety of fields. It is alsointeresting to consider servant leadership in comparison with other, more established, leadershipmodels. Numerous research studies have focused on such relationships between theories.Servant leadership is often associated with Christian leadership and Christian leaders;however, the model is not limited to the Christian realm. Such well-known organizations as 7Eleven, TD Industries, Southwest Airlines, Herman Miller, and ServiceMaster embrace theservant leadership model. Herman Miller‟s website explains the notion of servant leadership:At Herman Miller, we respect each other as we are and focus on who we will become. Ourculture represents the collective attitudes, aspirations, ideas, and experiences of the people whowork here (http://www.hermanmiller.com/about-us/things-that- matter-to-us.html).A review of Herman Miller‟s values gives further evidence of the company‟s focus on servantleadership. The identified values are operational excellence; better world report; environmentaladvocacy; inclusiveness and diversity; health and well-being; and community service.1. DEFINITIONS AND DEVELOPMENT OF SERVANT LEADERSHIPUnderstanding servant leadership is greatly aided by understanding the terms servant andservice. The dictionary definitions of servant have many dimensions:1.one who serves, or does services, voluntarily or on compulsion; a person who isemployed by another for menial offices, or for other labor, and is subject to his command; aperson who labors or exerts himself for the benefit of another, his master or employer; asubordinate helper2.a person in the service of another3.one who expresses submission, recognizance, or debt to another4.a person working in the service of another5.in a subordinate position6.a person who is hired to work for anotherLikewise, the definitions of the word service take several approaches:1.An act of assistance or benefit; a favor2.an act of helpful activity; help; aid.3.work done by one person or group that benefits another4.The performance of work or duties for a superior or as a servant5.be of service, to be helpful or useful (Dictionary, 2011)The concept of servant leadership, as developed by Robert Greenleaf, has given attention tothe topic of servant leadership. The leader as a servant has historical origins back to biblicaldays, though this has not been a concept understood or practiced by many. Greenleaf'sconception of servant leadership has brought about significant change in the philosophy ofleadership and management in numerous arenas of the secular business world. In describing thequalities of a leader, DePree insisted, “Above all, leadership is a position of servanthood” (1997,p. 220).

25O. Ingram / Journal of Management Science and Business Intelligence 2016 1(1) 21-26Ability to leadInfluenceLanguage steningPersuasionStewardshipConceptualizing5 CONCLUSIONUnderstanding servant leadership is only the first step toward the practice of servantleadership. Today‟s service economy is consistent with servant leadership, but the concept takesservice to a higher level. Students today are increasingly seeing themselves as consumers andcustomers—people who seek a service that higher education offers. Educators have theopportunity to meet the needs of students by teaching the disciplines in which they are expertsand model for students a viable leadership example that can further prepare them for theirvocational choices.REFERENCES[1] Banks,

Servant Leadership
Robert K. Greenleaf first coined the phrase "servant leadership" in his 1970 essay, "The Servant as a Leader." However, it's an approach that people have used for centuries. As a servant leader, you're a "servant fir
6m ago
67 Views

César E. Chávez – The Man and the Servant-Leader
The Servant-Leader According to the World of Business Organizations The idea of "servant-leader" was developed by Mr. Robert K. Greenleaf in 1968. In a 1970 essay entitled "The Servant as Leader" 2, he recounts the way in which he thought of the term "Servant-Leadership." Mr. Greenleaf re
6m ago
46 Views

THE COMMON GOOD AND SERVANT-LEADERSHIP
how Robert K. Greenleaf’s vision of servant-leadership is embodied in the life and work of Saint John XXIII. This inquiry is guided by Larry Spears’ influential rubric of ten servant-leadership 1 Kent M. Keith, The Case for Servant-Leadership (Westfield, IN: Greenleaf Center for
6m ago
17 Views