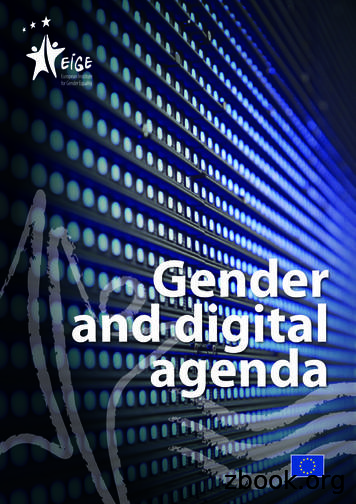 This publication was prepared under the gender mainstreaming programme of the European Institute for GenderEquality. It constitutes the integral part of EIGE’s Gender Mainstreaming Platform. The work published on the Platformrepresents a joint effort of EIGE Gender Mainstreaming Team and various experts and contractors who contributed invarying degrees to different sections of the Platform: Catarina Arnaut, Davide Barbieri, Daria Broglio, Irene Dankelman,Marianne Dauvellier, Jane Dennehy, Aleksandra Duda, Lucy Ferguson, Elena Ferrari, Maxime Forest, Katia Frangoudes,Regina Frey, Pat Irving, Manuela Samek Lodovici, Daniela Loi, Lin McDevitt-Pugh, Katerina Mantouvalou, Lut Mergaert,Siobán O’Brien Green, Nicola Orlando, Thera van Osch, Flavia Pesce, Irene Pimminger, Sheila Quinn, Cristina Radoi, AlideRoerink, Lenka Simerska, Cristina Vasilescu, Nathalie Wuiame and Margherita Sofia Zambelli.EIGE would also like to thank its Experts’ Forum Members, Members from the Gender Mainstreaming Thematic Networkand the European Commission who have contributed to a large extent with their expertise, ideas and feedback.This publication is available online through EIGE’s Gender Mainstreaming Platform: http://eige.europa.eu/gendermainstreamingThe European Institute for Gender Equality created the online Platform on Gender Mainstreaming to support the EUinstitutions and governmental bodies with the integration of a gender perspective in their work. The Platform providesinsights on the relevance of gender in a variety of policy areas and offers online tools for gender mainstreaming.The Platform helps to improve individual and institutional competences to mainstream gender into the different sectorialareas and throughout the different stages of the development of any policy/programme/project. Understanding howto design, plan, implement, monitor and evaluate policies from a gender perspective will strengthen EU policies,increasing their societal relevance and responsiveness.European Institute for Gender EqualityThe European Institute for Gender Equality (EIGE) is the EU knowledge centre on gender equality. EIGE supports policymakers and all relevant institutions in their efforts to make equality between women and men a reality for all Europeansby providing them with specific expertise and comparable and reliable data on gender equality in Europe.YOUTUBE LOGO SPECSPRINT European Institute for Gender Equalityon light backgroundsmain redgradient bottomPMS 1795CPMS 1815CwhiteblackC0 M0 Y0 K0C100 M100 Y100 K100C0 M96 Y90 K2WHITEC13 M96 Y81 K54BLACKon dark backgroundsGedimino pr. 16LT-01103 VilniusLITHUANIATel. 370 5 215 7444E-mail: eige.sec@eige.europa.eustandardstandardno gradientsno eustacked logo (for sharing only)www.twitter.com/eurogenderstacked logo (for sharing ge.europa.euhttp://eurogender.eige.europa.euEurope Direct is a service to help you find answersto your questions about the European Union.Freephone number (*): 00 800 6 7 8 9 10 11(*) The information given is free, as are most calls (though some operators,phone boxes or hotels may charge you).More information on the European Union is available on the internet (http://europa.eu).Luxembourg: Publications Office of the European Union, 2016Print MH-02-16-896-EN-CPDF 110.2839/62574510.2839/270086 European Institute for Gender Equality, 2016Reproduction is authorised provided the source is acknowledged.

Gender Mainstreaming Platform Policy Areas Digital agendaEIGEContents1. Relevance of gender in the policy area 32. Issues of gender inequalities in the policy area 5Gender gaps and differences in access to and use of digital technologies 5Gender gaps in digital-related education 5Gender gaps in the digital labour market 6Segregation in low-paid positions 6Low levels of women’s entrepreneurship in ICT 7ICT, cybercrime and gender 73. Gender equality policy objectives at EU and international levels 8EU level 8International level 94. How and when? The digital agenda and the integration of gender dimension into the policy cycle 11Define 11Plan 15Act 16Check 175. Want to know more? 196. Current policy priorities at EU level 20Resources 202Gender and digital agenda

EIGEGender Mainstreaming Platform Policy Areas Digital agenda1. Relevance of gender in the policy areaThe digital agenda is the European Union’s strategy that ensures that digital technologies, including the internet, areused to stimulate the EU’s economy and help its citizensand businesses to get the most out of these technologies. Itis the first of the seven flagship initiatives under the Europe2020 strategy for smart, sustainable and inclusive growth (1).The digital agenda for Europe was established with a viewto stimulating economic growth while at the same time addressing social challenges through information and communications technology (ICT). In both cases, gender hasparticular relevance.In terms of addressing social challenges, access to modernICT and the internet enables the exercise of human rights,including freedom of expression, cultural rights and theright to assembly. It can also confer a sense of identity. Internet access also encompasses the right to participate andfully engage in policy- and decision-making processes,thereby making the internet a gateway to new ideas andopportunities and a driving force for innovation (2). The inclusion of women in the digital world, through increasedaccess to internet and increasing opportunities to study ICTsubjects, is an empowering process. It gives women a voiceand enables them to participate effectively in governanceprocesses and innovate to build and shape the future theywant (3).In terms of economic growth, the so-called knowledgeeconomy, which relies on intellectual resources such asknowledge or expertise, is a key economic factor underpinning national and EU development. The World Banksuggests that every 10 % increase in access to broadbandresults in a 1.38 % rise in gross domestic product (GDP) indeveloping countries. The 2015 progress report on the EUdigital agenda confirms this correlation: digitalisation accounted for 30 % of growth in GDP in the EU between 2001and 2011 (4).(1) European Commission, ‘Digital agenda for Europe’, Glossary .(2) United Nations Broadband Commission, Doubling digital opportunities:enhancing the inclusion of women and girls in the information society, working-groups/bb-doubling-digital-2013.pdf).(3) United Nations Broadband Commission, Doubling digital opportunities:enhancing the inclusion of women and girls in the information society, working-groups/bb-doubling-digital-2013.pdf).(4) European Commission, Digital agenda targets: progress report, 2015 oreboard-reports).According to the Broadband Commission report, the presence of women online can boost GDP: bringing an additional 600 million women and girls online around the worldwill result in a GDP increase of up to USD 18 billion.The report underlines that, for women, having access to theinternet means:increased efficiency/productivity in their work andbusinesses;improved access to markets to sell and buy goods;improved education;wider networks;new innovations;faster access to relevant information (5).In addition, the European Commission report Women activein the ICT sector concludes that including more women inthe digital economy could create an annual GDP boost inthe EU of EUR 9 billion (6).Furthermore, ICT also enables people to acquire new skillsand acts as a catalyst in the delivery of public services suchas education, employment, healthcare and financial services. In this light, ensuring equal access to ICT and the internetis not only a matter of human rights (e.g. freedom of expression); it would also improve women’s health and the healthof their families and communities, support women’s accessto education and other social services and contribute towomen’s employment, economic independence and thesustainable development of their livelihoods (7).However, the full potential that women can bring to thedigital field — in terms of economically sustainable growth,human rights and social achievement — is still blocked bypersistent gender inequalities.(5) United Nations Broadband Commission, Doubling digital opportunities:enhancing the inclusion of women and girls in the information society, working-groups/bb-doubling-digital-2013.pdf).(6) DG Communications Networks, Content and Technology, Women activein the ICT sector, 2013 iles/documents 0/documents 32b35cbb8f4815da69c1295eb5c29c99.pdf).(7) International Telecommunication Union (ITU), A bright future in ICTs:opportunities for a new generation of women, 2012 icts-opportunities-new-generation-women).Gender and digital agenda3

EIGEGender Mainstreaming Platform Policy Areas Digital agendaFirst of all, there is a gender divide in internet use amongwomen and men (8). This may be related to the lower takeup of digital education among women: for example, the useof ICT and the internet is usually part of scientific educationpathways, where women are present in smaller numbers.Women are also under-represented in ICT employmentand are generally employed in low-quality digital jobs (9),despite research suggesting that gender balance in highvalue ICT positions, both in management and operationalroles, improves business performance (10). The most recentprogramme for international student assessment (PISA)data on the link between ICT education and employmentshows that girls are over-represented among students whoexpect to work in the health and social fields, while boys areover-represented among 15 year olds who expect to workas engineers or computer scientists. On average amongOrganisation for Economic Cooperation and Development(OECD) countries, fewer than 5 % of girls contemplate pursuing careers in these fields. In fact, there are almost fourtimes as many boys as girls who expect to be employed inengineering and computing in OECD countries (11).Second, ICT has been increasingly associated with cybercrime, which is becoming an instrument to harass and harmwomen, while at the same time reinforcing existing structures of inequality. For example, the history of surveillancetechnologies reveals that they were developed in a cultural(8) United Nations Broadband Commission, Doubling digital opportunities:enhancing the inclusion of women and girls in the information society, working-groups/bb-doubling-digital-2013.pdf).9( ) United Nations Broadband Commission, Doubling digital opportunities:enhancing the inclusion of women and girls in the information society, working-groups/bb-doubling-digital-2013.pdf); ITU, A bright future in ICTs: opportunities fora new generation of women, 2012 cts-opportunities-new-generation-women); DG Communications Networks, Content and Technology, Women active in the ICT sector,2013 iles/documents 0/documents 32b35cbb8f4815da69c1295eb5c29c99.pdf).(10) ITU, A bright future in ICTs: opportunities for a new generation of women, ure-icts-opportunities-newgeneration-women).11( ) OECD, The ABC of gender equality in education: aptitude, behaviour, confidence,PISA, OECD Publishing, 2015 er and digital agendacode rife with inequalities, and thus reflect those same inequities. Moreover, as these computing technologies weredeveloped in a cultural context of the persistent and widespread occurrence of violence against women (VAW), it isexpected that these new technologies reflect these oldinequalities and have resulted in the intensification of thesurveillance and stalking of victims of violence (12).The digital agenda is thus an area that remains influenced bya set of persistent gender inequalities. These are as follows:gender gaps and differences in access to and use ofdigital technologies;gender gaps and differences in digital-relatededucation: segregation across fields of study betweenwomen and men and girls and boys;gender and the digital labour market: women’s lowparticipation in the digital labour market and inparticular in high-quality jobs and top managementpositions;ICT, cybercrime and gender.(12) Mason, C. and Magnet, S., ‘Surveillance studies and violence againstwomen’, Surveillance Studies, Vol. 19, No 2, 2012, pp. 105-118 nce-and-society/article/viewFile/vaw/PDF).

A Guide for Preparing a Council Meeting Agenda
The agenda title and heading should be similar to the council meeting minutes in format and should: a. State that it is an agenda b. Name the Municipality c. Show the date, time and place of the meeting for which the agenda is issued. Acceptance of the Agenda The agenda for a council meeting is not binding unless it has been adopted by a
8d ago
3 Views

Policing and Gender - OSCE
only upon women to consider also how masculinities (socially constructed meanings of manhood) underpin gender inequality. Many gender equality advocates are reflecting upon the relationships between gender and sexual orientation, gender identity and gender Image: Ghanaian police officer Ma
4m ago
22 Views

EUROPEAN CAPITALS OF CULTURE - SECoC
- common aspects of European cultures, heritage and history as well as European integration and current European themes European artists and transnational cooperation with operators from different countries, including other ECOCs. A strategy to attract the interest of a broad European public. Culture European dimension
5m ago
14 Views

Commission Business Meeting Agenda
2a. Consent Agenda Items listed under the consent agenda are considered routine and necessary commission matters and will be approved by a single motion of the Commission without separate discussion. If separate discussion is desired, that item will be removed from the consent agenda and placed on the regular business agenda. Action item. 2.1
10d ago
2 Views

SMART INDUSTRY - European Commission
Industry Team prepared an new action agenda 2018-2020 to be proposed to the new government, still under negotiation after the elections of May 2017. 1.3. Status of general Digital Agenda End of 2011 the government formulated the ambitions for a Digital Agenda (2011-2015), to
5m ago
6 Views
Popular Tags
Recent Views