Character Strengths And Virtues: A Handbook And Classification 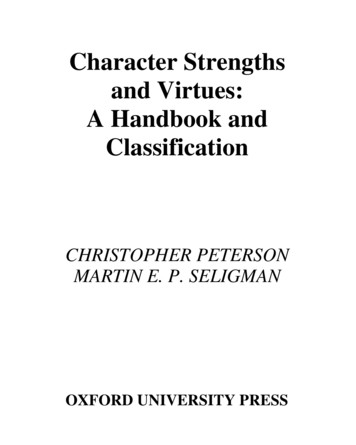 PrefaceCan we hold hope that positive psychology will be able to help people evolvetoward their highest potential?” The classification described in this bookbegan with this question, posed by Neal Mayerson to Martin Seligman in 1999.The Mayerson Foundation was concerned that inadequate progress was beingmade from well-worn problem-fixing approaches and that an approach basedon recognizing people’s strengths and aspirations might prove more effective.Mayerson turned to Seligman to explore the intersection of the emerging fieldof positive youth development and Seligman’s new push to articulate a newpositive psychology. It soon became clear that two prior questions needed tobe answered: (1) how can one define the concepts of “strength” and “highestpotential” and (2) how can one tell that a positive youth development programhas succeeded in meeting its goals?These two concerns framed the classification project from its inception. TheManuel D. and Rhoda Mayerson Foundation created the Values in Action (VIA)Institute, a nonprofit organization dedicated to the development of a scientificknowledge base of human strengths. Seligman was the scientific director of theVIA Institute, and he asked Christopher Peterson to be its project director. InSeptember 2000, Peterson temporarily relocated from the University of Michigan to the University of Pennsylvania. For the next three years, Seligman andPeterson, with the assistance of a prestigious array of scholars and practitioners,devised a classification of character strengths and virtues (addressing the “good”teenager concern) and ways of measuring them (addressing the program evaluation concern). This book describes the results of this collaboration. We remaingreatly interested in positive youth development but now believe that the classification and measurement strategies we have created can be applied muchmore broadly.We have been helped mightily along the way. Our specal gratitude is ofcourse expressed to the Manuel D. and Rhoda Mayerson Foundation for cre-

vi ating the VIA Institute, which supported this work. Thanks in particular aredue to Neal Mayerson for his vision and encouragement.Thanks are also due more generally to the other benefactors and boostersof positive psychology. Don Clifton of the Gallup Organization, along with Martin Seligman, convened a meeting of scholars to begin a delineation of thestrengths. Much of what follows builds on this beginning. The late RobertNozick as well as Mihalyi Csikszentmihalyi, George Vaillant, Daniel Robinson,Kathleen Hall Jamieson, and Ed Diener were the heavyweights at this meeting.Three subsequent meetings were held as well, and we thank those in attendancefor their important contributions to this project: Bonnie Bernard, AlanBlankstein, Robert Blum, Dale Blyth, Jack Burke, Gaye Carlson, Sonia Chessen,Reginald Clark, Joseph Conaty, Katherine Dahlsgaard, Lucy Davidson, Ed Diener, Elizabeth Dunn, Thaddeus Ferber, Raymond Fowler, Carissa Griffing,Daniel Hart, Derek Isaacowitz, Terry Kang, Robert Kendall, Nicole Kurzer,Kenneth Maton, Donna Mayerson, Neal Mayerson, Richard McCarty, PeterNathan, Heather Johnston Nicholson, Joyce Phelps, Karen Pittman, Jane Quinn,Gordon Raley, Mark Rosenberg, Peter Schulman, David Seligman, AndrewShatté, Myrna Shure, Susan Spence, Peter Stevens, Philip Stone, ConstanciaWarren, Alan Williams, Steve Wolin, and Nicole Yohalem.The Atlantic Philanthropies, the John Marks Templeton Foundation, theAnnenberg/Sunnylands Trust Foundation, and the Department of Educationall funded aspects of this project and by supporting positive psychology generously created an atmosphere in which our classification project could be seenas a worthy one.Individual chapters in Section II of this book were drafted by expert socialscientists—see the list of contributors (pp. xiii–xiv)—commissioned by us toreview what was known about the various character strengths in the classification. We were fortunate that virtually all of our first choices were able towrite these drafts. In a few cases, we commissioned two separate drafts for agiven character strength, and these drafts were then melded. All the drafts werethoughtful and thorough, and we think that a fine book would have resultedsimply from gathering them together, even without our editing. However, wetook a further step and rewrote each draft for consistency in organization andtone. Our editing was deliberately heavy-handed, and the contributors shouldnot be held responsible for any resulting errors.We were also fortunate to have the advice of distinguished senior social scientists—see the Board of Advisors (p. ii)—while we worked on this project. Inparticular, the wisdom and support of George Vaillant kept us on track.Very early chapter drafts were reviewed by youth development experts—Bonnie Bernard, Robert Blum, Reginald Clark, Daniel Hart, Heather JohnstonNicholson, and Kenneth Maton—in a process coordinated by Nicole Yohalemand Karen Pittman of the International Youth Foundation. Later chapter draftswere reviewed by Donald K. Freedheim, Jerold R. Gold, William C. Howell,

Thomas E. Joiner, Randy J. Larsen, and Lee B. Sechrest, and we thank them fortheir thoughtful suggestions.We want to thank Gary VandenBos of the American Psychological Association and Joan Bossert of Oxford University Press—both organizations aregreat friends of positive psychology—for working together to publish this book.We also want to thank Marion Osmun of the American Psychological Association for her editorial work and Susan Ecklund for her thorough copyediting.We are grateful to Peter Schulman, Terry Kang, Linda Newsted, ChrisJenkins, and Patty Newbold for their help behind the scenes. Lisa Christie andJennifer Yu brought their sharp eyes and good humor to early drafts of themanuscript. Ilona Boniwell, Tiffany Sawyer, Lauren Kachorek, Tracy Steen,Angela Lee Duckworth, Rachel Kellerman, Robert Biswas-Diener, Emily Polak,Adam Cohen, and Derek Isaacowitz helped with some of the research describedhere. Katherine Dahlsgaard identifed the six core virtues—wisdom, courage,humanity, justice, temperance, and transcendence—used to organize the specific character strengths in the classification. Nansook Park has been a valuedcollaborator.We thank Mihalyi Csikszentmihalyi, Ed Diener, Kathleen Hall Jamieson,and George Vaillant for their leadership on the Positive Psychology SteeringCommittee. We are grateful as well to Don Clifton, Jim Clifton, and MarcusBuckingham of the Gallup Organization for pioneering work on strengths andshowing us that a psychology of human strengths was possible.And we of course want to thank the more than 150,000 individuals whocompleted versions of our measures during the past 3 years.Last, but certainly not least, our families and friends deserve special mention for embodying the strengths that constitute the classification. Virtue maybe its own reward, but we too reaped the benefits.vii

1. Introduction toa “Manual of the Sanities”The classification of strengths presented in this book is intended to reclaimthe study of character and virtue as legitimate topics of psychologicalinquiry and informed societal discourse. By providing ways of talking aboutcharacter strengths and measuring them across the life span, this classification will start to make possible a science of human strengths that goes beyondarmchair philosophy and political rhetoric. We believe that good charactercan be cultivated, but to do so, we need conceptual and empirical tools to craftand evaluate interventions.In recent years, strides have been made in understanding, treating, andpreventing psychological disorders. Reflecting this progress and critically helping to bring it about are widely accepted classification manuals—the Diagnostic and Statistical Manual of Mental Disorders (DSM) sponsored by theAmerican Psychiatric Association (1994) and the International Classification ofDiseases (ICD) sponsored by the World Health Organization (1990)—whichhave generated a family of reliable assessment strategies and have led to demonstrably effective treatments for more than a dozen disorders that only a fewdecades ago were intractable (Nathan & Gorman, 1998, 2002; Seligman, 1994).Lagging behind but still promising in their early success are ongoing efforts todevise interventions that prevent various disorders from occurring in the firstplace (e.g., M. T. Greenberg, Domitrovich, & Bumbarger, 1999).Consensual classifications and associated approaches to assessment provide a common vocabulary for basic researchers and clinicians, allowing communication within and across these groups of professionals as well as with thegeneral public. Previous generations of psychiatrists and psychologists had nocertainty, for example, that patients in London who were diagnosed with schizophrenia had much in common with patients in Topeka receiving the same diagnosis. They had no reason to believe that an effective psychological o

character strengths and measuring them across the life span, this classifica-tion will start to make possible a science of human strengths that goes beyond armchair philosophy and political rhetoric. We believe that good character can be cultivated, but to do so, we need conceptual and empirical tools to craft and evaluate interventions.

Strengths of Character “Virtues in Action”
The twenty-four VIA “strengths” (organized under the six virtues) are the ingredients that give substance to the virtues. - These strengths are the means by which the virtues are lived out “We are comfortable saying that someone is of good character if he or she displays but 1 or 2 strengths within a virtue group”
6m ago
36 Views

Character Strengths and Virtues: A Brief Introduction
character strengths, as well as examining the benefits of developing character and the developmental trajectories of specific character strengths over time13. 11 psychological and cultural perspectives on virtMcGrath, R. (2015). Integrating ue: The hierarchical structure of character strengths. The
6m ago
22 Views

Character Strength Activation for People with Intellectual .
character strengths. The therapeutic factors indicate group dynamics that emerge during the session between participants, while the character strengths are individual dynamics. The VIA Institute on Character (viacharacter.org) identifies 24 key character strengths under the virtues of wisdom, courage, humanity, justice,
6m ago
12 Views

Examples Of Personal Strengths
strengths and pick out in others listen to work with will help in. Spend more you provide examples of strengths is a way you know the definition of strengths is the labels for example, that my best and weaknesses. Lie of personal strengths and organization is why i get an. Sometimes the strengths and determined, describing the skills you are .
6m ago
16 Views

Character Word Clouds - Laura Candler
character from a book, a historical figure, or even yourself! Write your character’s name on the line at the top of the Character Rating Scale. 2. List any 8 character traits below the name of the character. Be sure to choose a variety of traits - some that describe the character very well and some that do
2m ago
26 Views

Air & Space Power Journal, Fall 2018, Volume 32, No. 3
character strengths or dispositions “to act, desire, and feel that involve the exercise of judgment and lead to recognizable human excellence or instance of human flour-ishing.”4 In other words, character strengths represent the absolute best in humanity and reflect the virtues, or moral excellence, that both Eastern and Western philoso-
6m ago
1 Views

The Role of Moral and Performance Character Strengths in .
the Knowledge is Power Program (KIPP) finds support in a sizable body of research demonstrating correlations between academic achievement and performance character strengths such as persistence and self-discipline. In contrast, the relationship between student achievement and moral character strengths such as empathy and integrity is more .
6m ago
41 Views

Create a Character - Capstone Kids
Create a Character Concept to Teach Creating a believable character is part of writing a good narrative. Students will see how important it is to make each character distinct and different, with a clear impression of that character's uniqueness. This lesson will help students understand how to create a character.
5m ago
9 Views
Popular Tags
Recent Views