Fashion Industry Analysis From The Perspective Of Business . 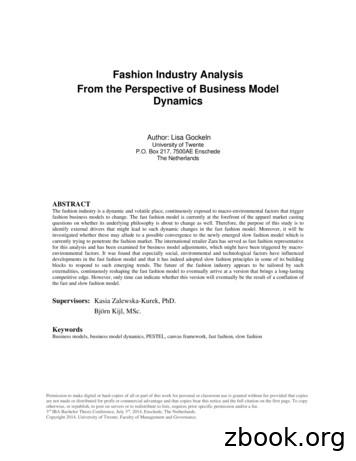 Fashion Industry AnalysisFrom the Perspective of Business ModelDynamicsAuthor: Lisa GockelnUniversity of TwenteP.O. Box 217, 7500AE EnschedeThe NetherlandsABSTRACTThe fashion industry is a dynamic and volatile place, continuously exposed to macro-environmental factors that triggerfashion business models to change. The fast fashion model is currently at the forefront of the apparel market castingquestions on whether its underlying philosophy is about to change as well. Therefore, the purpose of this study is toidentify external drivers that might lead to such dynamic changes in the fast fashion model. Moreover, it will beinvestigated whether these may allude to a possible convergence to the newly emerged slow fashion model which iscurrently trying to penetrate the fashion market. The international retailer Zara has served as fast fashion representativefor this analysis and has been examined for business model adjustments, which might have been triggered by macroenvironmental factors. It was found that especially social, environmental and technological factors have influenceddevelopments in the fast fashion model and that it has indeed adopted slow fashion principles in some of its buildingblocks to respond to such emerging trends. The future of the fashion industry appears to be tailored by suchexternalities, continuously reshaping the fast fashion model to eventually arrive at a version that brings a long-lastingcompetitive edge. However, only time can indicate whether this version will eventually be the result of a conflation ofthe fast and slow fashion model.Supervisors: Kasia Zalewska-Kurek, PhD.Björn Kijl, MSc.KeywordsBusiness models, business model dynamics, PESTEL, canvas framework, fast fashion, slow fashionPermission to make digital or hard copies of all or part of this work for personal or classroom use is granted without fee provided that copiesare not made or distributed for profit or commercial advantage and that copies bear this notice and the full citation on the first page. To copyotherwise, or republish, to post on servers or to redistribute to lists, requires prior specific permission and/or a fee.3rd IBA Bachelor Thesis Conference, July 3rd, 2014, Enschede, The Netherlands.Copyright 2014, University of Twente, Faculty of Management and Governance.

Until the present day, many business model definitions havebeen published trying to capture the meaning, use, purpose andessence of the concept. After reviewing more than 30 academicarticles and journals it was found that all definitions of thebusiness model are currently – and clearly – heading towardsone specific direction. To come straight to the point, thebusiness model concept has been considered as being valuebased. Scholars like Shafer et al. (2005), Casadesus-Mansanelland Ricart (2010) or DaSilva and Trkman (2013) argue that abusiness model contains a specific set of choices andcorresponding consequences, which lead to the generation ofvalue. It is a holistic framework (Al-Debei & Avison, 2010;Zott et al., 2011) that represents the underlying business logicof an organization (Teece, 2010; Al-Debei & Avison, 2010;Shafer et al., 2005) and directly results from its respectivecorporate strategy (Casadesus-Masanell & Ricart, 2010). Manytheorists (Shafer et al., 2005; Casadesus-Mansanell & Ricart,2010; Zott et al., 2011; Demil & Lecocq, 2010; Tongur &Engwall, 2014; Johnson, Christensen & Kagermann, 1996; Zott& Amit, 2008; Arend, 2013; Sosna, Trevinyo-Rodríguez &Velamuri, 2010; Chesbrough & Rosenbloom, 2002) are inaccordance that business models exist to explain the waycompanies are creating value. In this respect, it is important toenvisage that the business model must not be seen in isolation.Although it is focused on a specific company, its boundaries aremuch wider than only firm-specific and similarly encompassexchanges and interactions with the stakeholders in its network(Zott et al., 2011; Zott & Amit, 2007, 2013). It is additionallyworth clarifying that it is not only the customers who should beprofiting from the value creation. As Freeman alreadysuggested in his stakeholder theory (Freeman, Harrison, Wicks,Parmar & De Colle, 2010) a company is only successful if itgenerates value for all stakeholder groups that are anyhowengaged with the business. Sosna et al. (2010) and Zott andAmit (2007) confirm this opinion when stating that businessmodels are externally focused and concerned with exchangesand “boundary-spanning transactions” (Zott & Amit, 2008, p. 3)with others. Besides, Zott et al. (2011) go one step further byproposing that business models rather have a dual focus andalso concentrate on how the firm captures value, for instance interms of profits gained, for itself. Scholars like Shafer et al.(2005), Zott and Amit (2013), Sosna et al. (2010), Demil andLecocq (2010) and Baden-Fuller and Morgan (2010) areequally agreeing on this proposition. As distinguished from thisview, Demil and Lecocq (2010) and Johnson et al. (1996)provide an indication to a third dimension, namely valuedelivery, which is to be included in the business modeldefinition as well. It follows that creating value is just theentering wedge of the interactions between parties within thevalue network since the value, disregarding of its form, thenneeds to be delivered to and appreciated by the stakeholders.This in turn is the prerequisite for the company to eventuallyappropriate a share of the created value for itself. Osterwalderand Pigneur (2010) have perfectly captured this finding byconcluding that “A business model describes the rationale ofhow an organisation creates, delivers and captures value” (p.14). This definition of a triple value focus of the business modelconcept sets the framework for this research study. Figure 1visualises this finding with the aid of a simple relationshipsgraph.Value CreationValue CaptureValue DeliveryBusiness Modeland unambiguous solutions, the first part of this theoreticalframework will result in an attempt to come to a commondefinition by taking into account the main relevant studiestackling this topic.Figure 1. Triple focus of business model.Having clarified what is actually meant by the term ‘BusinessModel’, it is now worth finding out how it can serve as apowerful strategic concept and what encourages academics andpractitioners to give so much thought about it. Generally, it canbe stated that the business model is an essential strategic toolfor every company. It helps making and implementing strategicchoices and “facilitates the analysis, testing, and validation ofthe cause-and-effect relationships that flow from [these]”(Shafer et al., 2005, p. 203). Arend (2013) and Zott et al. (2011)point out that business modelling further promotes the reductionof the complexity companies are facing in today’s informationoverladen industry contexts. In this respect, Chesbrough andRosenbloom (2002) add that transactions and interdependenciesbetween market participants can be facilitated and made clearer.Al-Debei and Avison (2010) also stress that the business modeldefines how a company is related to and interacting with itsenvironment and all other participants in the value network.This is made possible through the provision of a commonlanguage among the stakeholders involved, which, according toZott and Amit (2013), is an important function of the businessmodel. It provides information for stakeholders concerning forinstance the value proposition (Johnson et al., 1996), thecustomers (Baden-Fuller & Morgan, 2010) or key resources(Demil & Lecocq, 2010) of the respective company, which is“helpful in translating strategic objectives into implementationtasks and functions” (Al-Debei & Avison, 2010, p. 365). Withthis information, stakeholders get a better understanding of howthe company works (Baden-Fuller & Morgan, 2010) and howits internal business structure and functions operate andinterplay with each other (Al-Debei & Avison, 2010). All thismakes the business model, if properly applied, a tool forincreased efficiency (Zott & Amit, 2013), better decisionmaking (Hacklin & Wallnöfer, 2012) and secured sustainability(Demil & Lecocq, 2010). As a result, business models have thepotential to give the firm a competitive advantage over otherparticipants in the industry by not only generating more valuefor the stakeholders but also capturing more value for theshareholders than rivals do (Zott & Amit, 2013). Teece (2010)is further concerned about which other conditions can make thebusiness model a source of competitive advantage. He explainsthat, next to representing a reasonable business logic, thebusiness model further needs to be difficult to imitate forcompetitive companies and should be designed to cater for thecustomers’ needs and the interests of other stakeholders.Casadesus-Masanell and Ricart (2010) add that business models“can guide the search for novel, interesting and profitable newways to compete” (p. 212) to remain competitive, better react toinconsistencies and exploit uncharted market opportunities.In order to fully enjoy the advantages a successful businessmodel can bring, a company needs to make sure that its wholebusiness community understands what the business actuallydoes and how its activities, functions and processes interlinkand interlock within the business. Experts emphasise differentstrategic components, which form the building blocks of everybusiness and, taken together, generate a shared language for thecreation, delivery and appropriation of value. Severalframeworks or so-called ontologies are available in order toachieve clarity among the stakeholders regarding the design and2

within the fashion industry, namely the fast fashion and slow fashion model. According to Cachon and Swinney (2011) companies following the fast fashion business model are characterised by a quick response to the latest fashion trends as well as short produ

Nonprofit Self-Assessment Checklist
May 02, 2018 · D. Program Evaluation ͟The organization has provided a description of the framework for how each program will be evaluated. The framework should include all the elements below: ͟The evaluation methods are cost-effective for the organization ͟Quantitative and qualitative data is being collected (at Basics tier, data collection must have begun)
2m ago
304 Views

Fashion CopyPortfolio - eToro
Fashion: An Enormous Industry That Is Growing Quickly Few areas of the retail industry are as dominant as that of fashion. Worth over 700 billion, the fashion industry is big business, and it is only likely to get bigger in the years ahead. For investors, the fashion industry is creating some amazing opportunities right now.
6m ago
33 Views

FASHION & BEAUTY: THE ULTIMATE GUIDE TO DISCOVERY CAMPAIGNS
FASHION AND BEAUTY ADVERTISING TODAY Fashion and beauty marketing today has to move fast. Fashion trends change with the runway. One of the most rapidly growing fashion subsets is fast fashion— when brands adapt their products to reflect trends in the catwalk very quickly.2 Beauty trends are highly personalized. Beauty
6m ago
46 Views

FASHION & CREATIVE EXPRESSION PORTFOLIO
FASHION & CREATIVE EXPRESSION PORTFOLIO . 30% OF FASHION COURSE GRADE . The following exercises are designed to SHOWCASE YOUR AWARENESS OF THE FASHION INDUSTRY. In today’s competitive fashion industry, your portfolio is your ultimate sales tool. It must express the unique qualities that set you apart
20d ago
9 Views

Ten days full of fashion in Amsterdam
Benz FashionWeek Amsterdam), Zalando presents 10 Days Downtown, Vodafone Firsts Fashion LAB and Fashion in Business, FashionWeek Nederland connects parties inside and outside the fashion industry, it promotes growth and development, and it celebrates all the wonderful things that the Dutch fashion has to offer in talent and creativity.
6m ago
32 Views