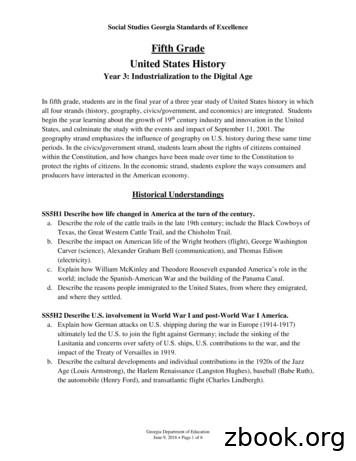 Social Studies Georgia Standards of ExcellenceFifth GradeUnited States HistoryYear 3: Industrialization to the Digital AgeIn fifth grade, students are in the final year of a three year study of United States history in whichall four strands (history, geography, civics/government, and economics) are integrated. Studentsbegin the year learning about the growth of 19th century industry and innovation in the UnitedStates, and culminate the study with the events and impact of September 11, 2001. Thegeography strand emphasizes the influence of geography on U.S. history during these same timeperiods. In the civics/government strand, students learn about the rights of citizens containedwithin the Constitution, and how changes have been made over time to the Constitution toprotect the rights of citizens. In the economic strand, students explore the ways consumers andproducers have interacted in the American economy.Historical UnderstandingsSS5H1 Describe how life changed in America at the turn of the century.a. Describe the role of the cattle trails in the late 19th century; include the Black Cowboys ofTexas, the Great Western Cattle Trail, and the Chisholm Trail.b. Describe the impact on American life of the Wright brothers (flight), George WashingtonCarver (science), Alexander Graham Bell (communication), and Thomas Edison(electricity).c. Explain how William McKinley and Theodore Roosevelt expanded America’s role in theworld; include the Spanish-American War and the building of the Panama Canal.d. Describe the reasons people immigrated to the United States, from where they emigrated,and where they settled.SS5H2 Describe U.S. involvement in World War I and post-World War I America.a. Explain how German attacks on U.S. shipping during the war in Europe (1914-1917)ultimately led the U.S. to join the fight against Germany; include the sinking of theLusitania and concerns over safety of U.S. ships, U.S. contributions to the war, and theimpact of the Treaty of Versailles in 1919.b. Describe the cultural developments and individual contributions in the 1920s of the JazzAge (Louis Armstrong), the Harlem Renaissance (Langston Hughes), baseball (Babe Ruth),the automobile (Henry Ford), and transatlantic flight (Charles Lindbergh).Georgia Department of EducationJune 9, 2016 Page 1 of 6

Social Studies Georgia Standards of ExcellenceSS5H3 Explain how the Great Depression and New Deal affected the lives of millions ofAmericans.a. Discuss the Stock Market Crash of 1929, Herbert Hoover, Franklin Roosevelt, the DustBowl, and soup kitchens.b. Analyze the main features of the New Deal; include the significance of the CivilianConservation Corps, Works Progress Administration, and the Tennessee Valley Authority.c. Discuss important cultural elements of the 1930s; include Duke Ellington, MargaretMitchell, and Jesse Owens.SS5H4 Explain America’s involvement in World War II.a. Describe German aggression in Europe and Japanese aggression in Asia.b. Describe major events in the war in both Europe and the Pacific; include Pearl Harbor, IwoJima, D-Day, VE and VJ Days, and the Holocaust.c. Discuss President Truman’s decision to drop the atomic bombs on Hiroshima andNagasaki.d. Identify Roosevelt, Stalin, Churchill, Hirohito, Truman, Mussolini, and Hitler.e. Describe the effects of rationing and the changing role of women and African Americans orBlacks; include “Rosie the Riveter” and the Tuskegee Airmen.f. Explain the role of Eleanor Roosevelt and the U.S. in the formation of the United Nations.SS5H5 Discuss the origins and consequences of the Cold War.a. Explain the origin and meaning of the term “Iron Curtain.”b. Explain how the United States sought to stop the spread of communism through the Berlinairlift, the Korean War, and the North Atlantic Treaty Organization.c. Identify Joseph McCarthy and Nikita Khrushchev.d. Discuss the importance of the Cuban Missile Crisis and the Vietnam War.SS5H6 Describe the importance of key people, events, and developments between 19501975.a. Analyze the effects of Jim Crow laws and practices.b. Explain the key events and people of the Civil Rights movement: Brown v. Board ofEducation (1954), Montgomery Bus Boycott, the March on Washington, Civil Rights Act,Voting Rights Act, and civil rights activities of Thurgood Marshall, Lyndon B. Johnson,Cesar Chavez, Rosa Parks, and Martin Luther King, Jr.c. Describe the impact on American society of the assassinations of President John F.Kennedy, Robert F. Kennedy, and Martin Luther King, Jr.d. Discuss the significance of the technologies of television and space exploration.Georgia Department of EducationJune 9, 2016 Page 2 of 6

Social Studies Georgia Standards of ExcellenceSS5H7 Trace important developments in America from 1975 to 2001.a. Describe the collapse of the Soviet Union, including the role of Ronald Reagan.b. Describe the events of September 11, 2001, and analyze their impact on American life.c. Explain the impact of the personal computer and the Internet on American life.Geographic UnderstandingsSS5G1 Locate important places in the United States.a. Locate important man-made places; include the Chisholm Trail; Pittsburgh, PA; KittyHawk, NC; Pearl Harbor, HI; Montgomery, AL.; and Chicago, IL.SS5G2 Explain the reasons for the spatial patterns of economic activities.a. Locate primary agricultural and industrial locations between the end of the Civil War and1900 and explain how factors such as population, transportation, and resources haveinfluenced these areas (e.g., Pittsburgh’s rapid growth in the late nineteenth century).b. Locate primary agricultural and industrial locations since the turn of the 20th century andexplain how factors such as population, transportation, and resources have influenced theseareas (e.g., Chicago’s rapid growth at the turn of the century).Government/Civic UnderstandingsSS5CG1 Explain how a citizen’s rights are protected under the U.S. Constitution.a. Explain the responsibilities of a citizen.b. Explain the concept of due process of law and describe how the U.S. Constitution protectsa citizen’s rights by due process.SS5CG2 Explain the process by which amendments to the U.S. Constitution are made.a. Explain the amendment process outlined in the Constitution.b. Describe the purpose for the amendment process.SS5CG3 Explain how amendments to the U. S. Constitution have maintained arepresentative democracy/republic.a. Explain how voting rights are protected by the 15th, 19th, 23rd, 24th, and 26thamendments.Georgia Department of EducationJune 9, 2016 Page 3 of 6

Social Studies Georgia Standards of ExcellenceEconomic UnderstandingsSS5E1 Use the basic economic concepts of trade, opportunity cost, specialization,productivity, and price incentives to illustrate historical events.a. Describe opportunity costs and their relationship to decision-making across time (e.g.,decisions by individuals in response to rationing during WWII).b. Explain how price incentives affect people’s behavior and choices (e.g., decisions toparticipate in cattle trails because of increased beef prices).c. Describe how specialization can improve standards of living and productivity (e.g., howHenry Ford’s use of the assembly line reduced the price of automobiles).d. Describe how trade and voluntary exchange promotes economic activity (e.g., how thePanama Canal increases trade among countries).SS5E2 Describe the functions of four major sectors in the U. S. economy.a. Describe the household function in providing resources and consuming goods and services.b. Describe the private business function in producing goods and services.c. Describe the bank function in providing checking accounts, savings accounts, and loans.d. Describe the government function in taxation and providing certain public goods andpublic services.SS5E3 Describe how consumers and producers interact in the U. S. economy.a. Describe how competition, markets, and prices influence consumer behavior.b. Describe how people earn income by selling their labor to businesses.c. Describe how entrepreneurs take risks to develop new goods and services to start abusiness.SS5E4 Identify the elements of a personal budget (income, expenditures, and saving) andexplain why personal spending and saving decisions are important.Georgia Department of EducationJune 9, 2016 Page 4 of 6

Social Studies Georgia Standards of ExcellenceMap and Globe SkillsGOAL: The student will use maps to retrieve social studies information.I: indicates when a skill is introduced in the standards and elements as part of the contentD: indicates grade levels where the teacher must develop that skill using the appropriate contentM: indicates grade level by which student should achieve mastery, the ability to use the skill inall situationsA: indicates grade levels where students will continue to apply and improve mastered skillsMap and Globe Skills1.use a compass rose to identify cardinaldirections2.use intermediate directionsK1234567IM AAAAAA AAM AAAAA AAIMAAAA AAIMAAAA AAIM AA AAI3.use a letter/number grid system to determinelocation4. compare and contrast the categories ofnatural, cultural, and political features foundon maps5. use graphic scales to determine distances ona map6. use map key/legend to acquire informationfrom historical, physical, political, resource,product, and economic maps7. use a map to explain impact of geography onhistorical and current events8. draw conclusions and make generalizationsbased on information from maps9. use latitude and longitude to determinelocation10. compare maps of the same place at differentpoints in time and from differentperspectives to determine changes, identifytrends, and generalize about human activities11. compare maps with data sets (charts, tables,graphs) and /or readings to draw conclusionsand make generalizations12. use geographic technology and software todetermine changes, identify trends, andgeneralize about human activitiesIGeorgia Department of EducationJune 9, 2016 Page 5 of 689-12ID MAAA AADD MAAA AAIMAAA AAIDDD M AAIM AA AAIM AA AAI