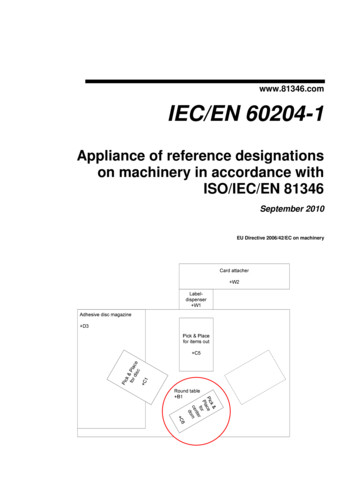 1Introduction1.1 GeneralSynopsis: The relation between the EU Machinery Directive and ISO/IEC 81346This document describes identification and marking of components in the form of referencedesignations prepared in accordance with ISO/IEC/EN 81346, viewed in relation to therequirements in EN 60204-1:2006 'Safety of machinery – Electrical equipment of machines. Part1: General requirements'.In this document references to EN 60204-1 are in italics. Other references are written in normalfont. This document is free of charge. It has the main purpose to explain the requirements ofmarking equipment on machinery in accordance with the European Machinery Directiveno. 2006/42/EC. The technique and requirements for establishing identifiers (e.g. TAG’s)shall be in accordance with ISO/IEC 81346 standard series: “Industrial systems,installations and equipment and industrial products – Structuring principles and referencedesignations”.The DS-Handbook no. 166 from Danish Standard Association (available from DanishStandard Webshop September 2010) is the easy-to-read guideline og how to apply theISO/IEC/EN 81346 standard. Please refer to www.81346.com for more information andpurchase.DisclaimerThe usage and appliance of this document is at your own risk as the author cannot be held responsible for any damage whatsoever due to mismatch ormisunderstanding in relation to the content of this document.1.2 IEC 60204-1 versus EN 60204-1Synopsis: Short introduction to the difference between IEC and EN 60204-1.Normally the IEC/ISO edition of a standard is no different from the following harmonizedEuropean edition (EN) of the same standard.For machinery to be installed in Europe, the EU directive 2006/42/EC on machinery applies.European norm EN 60204-1 applies to the electrical equipment of the machine. However, asHenrik Balslev 2003-2010www.81346.com 1-1

indicated in the Foreword to EN 60204-1 there are minor variations between IEC 60204-1 andEN 60204-1. In the EN edition a right border indicates a deviation from the IEC edition.A review of the IEC versus the EN standard shows that there is no difference between the itemsrelevant for documentation, marking and identification. Consequently, this document applies toIEC 60204-1 as well as EN 60204-1 in relation to documentation, marking and identification.Please note the vertical mark in the margin, when EN 60204-1 is used:1-2 www.81346.com Henrik Balslev 2003-2010

2Review of EN 60204-12.1 IntroductionSynopsis: About electrical equipment, documentation and marking onmachinery.EN 60204-1 deals with electrical equipment on machines. The edition in force is from 2006, andtypically it has a local designation from the member country in the European Union, e.g. 'DS/EN60204-1' (Denmark), 'DIN/EN 60204-1' (Germany) etc.The standard is used for design of the electrical equipment of machines, and is the standardtypically used when the European Machinery Directive 2006/42/EC shall be fulfilled in terms ofsafety for the electrical circuits.Reference designation systems according to ISO/IEC 81346-1 are relevant especially in relationto documentation and identification and safety aspects derived from this. In brief, the assumptionis that when the identification of the components (called ‘reference designations’ according to81346-1) complies with the technical documentation, handling of the machine becomes safer.This seems evident on paper, in practice, however, it is far from correct on all machines.For most manufacturers of machines, the challenge is that the machines become more andmore complex , and consequently also the electrical and mechanical equipment becomes morecomplex and extensive. For most people it is natural to continue to develop the way of preparingthe documentation, but sooner or later most of us will find that something is wrong: More errorsoccur, new employees have problems with the documentation form, so do the buyers of themachines, and the outcome is a major time consumption or even a machine that must bedescribed as dangerous.The solution is to introduce a reference designation system according to ISO/IEC 81346-1describing how to create a structured overview of the installation or machine. The techniquefrom 81346 provides an excellent overview of the composition of the machine, and in the end asafer machine. The use of a reference designation system provides many other advantages,e.g. the possible reuse of documentation during design and consequent reduce design costs.Naturally, it may seem impossible to structure data (it is easier to do as usual), and often itrequires the support of the management before implementation. However, this is a long-terminvestment in overview and reuse, and experience from companies working with the subjectshows that the technique in ISO/IEC 81346-1 is outstanding and capable of handling even verylarge amounts of complex information.Henrik Balslev 2003-2010www.81346.com 2-3

EN 60204-1 is known as a B-standard, so it makes no sense for a manufacturer to indicate thathe 'complies with the standard'. EN 60204-1 indicates various options to be stated, and this isdone e.g. by using Annex B including in total 13 items.The standard ISO/IEC 81346-1 (2009) is a combination of ISO TS 16952-1 (2005) and IEC61346 (1996). The new common standards are a major progress in common understanding ofthe design of identifiers (ID-codes) for the electrical and mechanical systems - also onmachines. 61346-1 (1996) 81346-1&&TS 16952 (2005)61346-2 (2000)81346-2(2009)Industrial plants, installationsand equipment and industrialproducts – Structuringprinciples and referencedesignationsTechnical productdocumentation –Reference designationsystemsINDUSTRIAL SYSTEMS,INSTALLATIONS ANDEQUIPMENT ANDINDUSTRIAL PRODUCTS –STRUCTURINGPRINCIPLES ANDREFERENCEDESIGNATIONSFigure 1- Basis for the common publication ISO/IEC 81346.2-4 www.81346.comHenrik Balslev 2003-2010

2.4 [3] - DefinitionsSynopsis: Definitions from 60204-1As an important element in most standards, chapter [3] includes a list of definitions. You arerecommended to read these thoroughly, because they are an important element in the correctunderstanding of the rest of the text.If no definition of a word is indicated in a standard, it is common practice to find and use thedefinition in the English 'Oxford English Dictionary' instead.The most important definitions relevant to this report are:[3.35] Machinery / machine – assembly of linked parts or components, at least one of whichmoves, with the appropriate machine actuators, control and power circuits, joined together for aspecific application, in particular for the processing, treatment, moving or packing of a material.The term 'machinery' also covers an assembly of machines which, in order to achieve the sameend, are arranged and controlled so that they function as an integral whole.[3.36] Identification – signs or inscriptions primarily for the purpose of identifying equipment,components and/or devices, which can include certain features thereof.[3.47] Reference designation – distinctive code which serves to identify an object in thedocumentation and on the equipment.As will appear from [3.47] the code on the equipment and in the documentation shall be identicalto create the link between the components of the machinery and the related technicaldocumentation.2-6 www.81346.comHenrik Balslev 2003-2010

2.5 [5.1] – Incoming supply conductorSynopsis: Terminals (terminations) and terminal blocks shall be correctlyidentified.It is stated that All terminals for the incoming supply shall be clearly identified in accordance withIEC 60445 and 16.1.For information, please see below short extract from IEC/EN 60445. For full reference, pleasesee the complete standard.Designated conductorIdentificationof conductorsand onAC conductorsLine 1Line 2Line 3Neutral conductorL1L2L3NUVWNDC conductorsPositiveL C or NegativeL-D or -Mid-point conductorMGraphicalsymbolsIEC 60417- -.Figure 3 – Short extract from IEC 60445 table 1.The terminals will often be a part of a terminal block. The terminal block is identified by areference designation prepared according to the ISO/IEC 81346 standard series,e.g. '-X1'.Cf. IEC 61666 the designation of the terminal block differs from the designations of the terminalsby a colon ':', so for instance terminal number 34 in –X1 is written as -X1:34.Henrik Balslev 2003-2010www.81346.com 2-7

2.6 [11.2] – Placing and assemblingSynopsis: Placing and assembling of controlgear[11.2.1] indicates that All items of controlgear shall be placed and oriented so that they can beidentified without moving them or the wiring. In relation to identification this means in practicethat the identifier (the reference designation) shall be placed preferably next to or close to thecomponent identified by the identifier. This way it will not be necessary to produce newidentifiers to replace a component (typically in the form of signs). See also section 3.1 - Placingof identifier.[11.2.1] indicates that Test points for connection of test equipment, where provided, shall be clearly identified to correspond with the documentation (see 17.3). This means that measuringpoints shall also be identified in the documentation, typically in the form of special terminals, orin the form of components appropriate for the purpose.Terminal blocks as well as components shall be labelled according to the ISO/IEC 81346standard series.2.7 [13] – Execution of wiringSynopsis: Identification of wires and conductors[13.1.1] General requirements states e.g. that terminals on terminal blocks shall be plainlymarked or labelled to correspond with markings on the diagrams.IEC 62491 (2008), Industrial systems, installations and equipment and industrial products Labelling of conductors and cores, indicates methods for labelling of conductors and cores.ISO/IEC 81346 is a normative reference to IEC 62491.2.8[17] – Technical documentationSynopsis: About technical documentation[17.2] - Information to be provided states a list of the minimum requirement for documentation ofelectrical equipment of machines. Though the list includes only the requirements for theelectrical documentation, preparation of corresponding documentation should be considered forother mechanical parts of the system forming part of the functionality of the machine.The main issue is that all components can be retrieved in the documentation, and that theidentification (i.e. the reference designation) in the documentation and on the machine areidentical, in order to allow retrieving of the components.2-8 www.81346.comHenrik Balslev 2003-2010

It is common for electro technicians to consider the electrical circuit diagrams the most importantdocument, and thus try to incorporate e.g. a page number as a part of the identifier. However,this is not recommended, partly because there are other documents than circuit diagrams whichcould rightly be used on this ground, partly because by definition the preparation of a referencedesignation system is independent of the documentation. The identifiers in the referencedesignation system are reflected in the documentation rather than the other way round. SeeFigure 4 on the next page.[17.3] Requirements applicable to all documentation states that unless otherwise agreedbetween manufacturer and user: . reference designations shall be in accordance with relevantparts of IEC 61346 (now ISO/IEC 81346). For a manufacturer of machines this involves theproblem that the manufacturer must supply different codes for different clients, and as aconsequence the manufacturer cannot make own modular thinking. For the user there is also amisunderstood modification in 'forcing' a manufacturer to supply codes suiting the user betterthan the manufacturer.The solution for the manufacturer as well as the user lies in the technology of referencedesignation systems, because the problem can be solved either by use of double codes or byapplying a combination of two reference designation systems as described in ISO/IEC 81346.Read more about double coding and combination of reference designations in ISO/IEC 81346-1and in the supporting DS-Handbook no. 166 to be found on www.81346.com (available inEnglish from September 2010).Henrik Balslev 2003-2010www.81346.com 2-9

2.9 [Annex B item 12] – IdentificationSynopsis: In Annex B the form of identification is agreedAnnex B is used as a checklist, e.g. between manufacturer and user of the machine, where anumber of practical issues can be decided before manufacture. As mentioned in section 2.8 [17] – Technical documentation the use of different reference designation systems can beagreed.It is highly recommended to use the ISO/IEC 81346 standard series as a common referenceframe for preparation of reference designations.2-12 www.81346.comHenrik Balslev 2003-2010

3.3 Simplification rulesSynopsis: You can 'place outside a parenthesis'.IEC 61082 (electrical) and ISO 15519 (mechanical) indicate simplification rules for referencedesignations, which allow you to place the common part of the reference designation 'outside' in practice by placing the common part separately:Figure 8 shows an example of an assembly plate, where all the components on the plate shallbe leading with '-A1' to get the full reference. E.g. the full reference for the first fuse (-F1) will be'-A1-F1' and so on.Figure 8 - An arrange

The Reference Designation System (RDS) A . - 81346
The 81346 standard series concerns the designation of technical objects – of any given kind, but mostly recognized as systems – in structures in a well-defined manner. Basically 81346 uses relations to handle complexity: part-of relations (partitive relations) used for structuring of objects determining system and elements in 81346-1 and
6m ago
12 Views

Industrial systems, installations and equipment and .
reference designation in the ISO/IEC 81346 series to ensure a consistent set of publications based on IEC 81346–1 and 2. Against this background, ISO/TS 16952-10 has been converted to ISO/TS 81346-10 following its systematic review. At this time, apart from necessary updates, no further changes have been made. Among the issues to be
6m ago
2 Views

IEC 60204-1 6 edition - Siemens
The IEC 60204-1 is aimed at the electrical equipment of machine design, project and manufacture. Scope The IEC 60204-1 is intended to be used in the following range of application: Within electric, electronic and programmable equipment and systems for machines. Equipment starting at
5d ago
1 Views

A Guide to RDS – Reference Designation Systems
News and Free Stuff about Reference Designation Systems – RDS 81346 As a part of our ISO/IEC 81346 environment, you can download free stuff and subscribe for newsletters at www.81346.com About the Author Henrik Balslev completed his engineering degree in 1988, and has for more than 25 years worked as a manager and systems
6m ago
87 Views