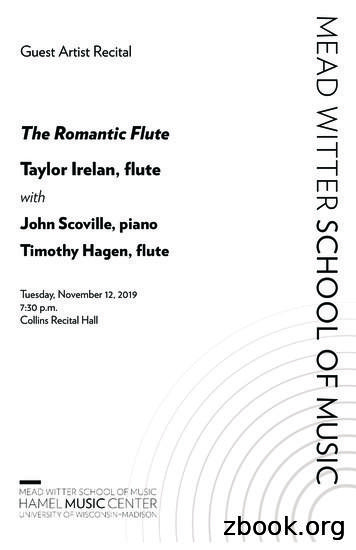 ABOUT THE GUEST ARTISTSRegarded as “the whole package” with a “clear sparkling sound [and] a vibrancy inall registers,” Taylor Irelan is proving to be an exciting emerging artist. Irelan has collaborated with award winning composers to commission, premiere, and record newworks for the flute, as well as write his own works and transcriptions for flute andvarious ensembles. He has been coached by composers Ian Clarke, Wil Offermans,and Thea Musgrave in preparation of performances of their music, including hisperformance of Musgrave’s Chamber Concerto No. 2 in the Barbican Centre as partof the BBC Symphony Orchestra’s Total Immersion Project, which was recorded andbroadcast live by BBC Radio 3 in London.An active chamber and orchestral musician, Irelan has appeared on stage at numerous prestigious venues, including the Barbican Centre (London), Milton Court(London), and Lincoln Center (New York City). Irelan serves as a substitute flutist withseveral professional orchestras around the United States, including the JacksonvilleSymphony and the Pueblo Symphony Orchestra. Previously serving as principalpiccolo for the London Graduate Orchestra, he has also performed with the LondonSymphony Orchestra and the Hot Springs Music Festival Symphony Orchestra aspart of their prestigious orchestral training programs. As a concerto soloist, Irelan hasbeen featured with ensembles across the United States and internationally.Irelan has won the top prizes in the National Flute Association Professional FluteChoir Competition, Florida Flute Association Advanced Masterclass Competition,University of North Florida Concerto Competition, Florida Community College Activities Association’s Student Artist Competition, and the Flute Fusion Young Artist Competition. He was selected as a finalist in both the Ars Flores Young Artists ConcertoCompetition and the Coeur d’Alene Symphony Young Artist Competition.Irelan currently teaches flute to select pupils as owner of The Tampa Flute Studio.He serves as director of the Gulf Coast Flute Choir, which, under his direction, wasselected to perform one of his original arrangements at the 2018 National FluteAssociation Convention. He has also been selected to be the conductor of the 2020Florida Flute Association Senior Honors Flute Choir.Irelan is a LefreQue Performing Artist. He received a Master of Music in performancewith merit from the Guildhall School of Music and Drama, as part of the GuildhallArtist Masters in Orchestral Artistry program in association with the London Symphony Orchestra. He received a Bachelor of Music in performance from the Universityof North Florida, where he graduated summa cum laude. His primary flute teacherswere Ian Clarke, Philippa Davies, Sarah Newbold, Les Roettges, and Rhonda Cassano.Pianist John Scoville enjoys a musical life that blends his passions for performing,collaborating, and teaching. After graduate studies in collaborative piano performance with Robert Koenig at the University of California, Santa Barbara, he hasreturned to Madison and is becoming embedded in its vibrant musical community.He divides his time between teaching piano, collaborating with instrumentalists andsingers at UW–Madison and other area schools and ensembles, and serving asorganist-pianist at McFarland Lutheran Church.

Scoville’s graduate work included performing in the UC Santa Barbara productionof Joel Feigin’s Twelfth Night, winner of the National Opera Association’s ProductionCompetition; the NOA Dominick Argento Chamber Opera Competition, produced incollaboration with UCSB; and winning performances in the Music Teachers NationalAssociation Young Artist California State Competition and the Performing Arts Scholarship Foundation Competition. He has held positions with Interlochen Arts Camp,Opera Santa Barbara, Ojai Youth Opera, San Miguel Institute of Bel Canto, andEnsemble Theatre Company and attended the American Institute of Musical Studies.He has performed in master classes for Tara Helen O’Connor, Denis Bouriakov, GilShaham, and Anne Epperson. Scoville’s undergraduate studies were completed summa cum laude with Lisa Marsh and Douglas Schneider at Portland State University.ABOUT THE FACULTY ARTISTPraised for his “technical virtuosity and musical sensitivity” (NewMusicBox) and “realflair” (The Well-Tempered Ear), Timothy Hagen is a laureate of multiple national andinternational competitions, including the Myrna Brown Artist Competition and Australian International Flute Competition. He is currently principal flute of the DubuqueSymphony, was principal flute of the Missouri Symphony (2009–2016), and hasperformed with orchestras across the country, including the Minnesota Orchestra,San Antonio Symphony, and Dallas Wind Symphony. His compositions have wonnumerous awards from the National Flute Association and are commissioned andperformed by musicians throughout North America, while his scholarly work hasappeared in the journals of the National Flute Association (United States) and BritishFlute Society.Hagen studied at the University of North Carolina School of the Arts, University ofSouthern California, Colburn School, and The University of Texas at Austin, and histeachers include Marianne Gedigian, Jim Walker, Philip Dunigan, Renée Siebert, Tadeu Coelho, Chelsea Czuchra, Felicia McNaught, and Tina Ballard. He is currently onthe faculty of the University of Wisconsin–Madison’s Mead Witter School of Music,where he teaches flute and performs with the Wingra Wind Quintet.

The Mead Witter School of Music gratefully acknowledges the Vilas Trust,the Anonymous Fund, and its many donors for supporting theseconcerts and other activities at the School of Music.Special thanks to WORT 89.9 FM and Wisconsin Public Radiofor their publicity support of our concert season.2019–2020music@music.wisc.edu www.music.wisc.edu 608-263-1900

Nov 12, 2019 · with merit from the Guildhall School of Music and Drama, as part of the Guildhall Artist Masters in Orchestral Artistry program in association with the London Sympho-ny Orchestra. He received a Bachelor of Music in performance from the University of North Florida, where

Park Mead, Bushey, Hertfordshire
How does the Shared Ownership Scheme work? A selectionof stunningone and two bedroom apartments are available to reserve now at Park Mead in Bushey, Hertfordshire. These apartments are available throughthe Help to Buy Shared Ownership scheme and are ready to move into in March 2020. Park Mead is situatedon Park Avenue in Bushey,
5m ago
13 Views

Mead Family Ancestry
Hertfordshire, England, and in 1272 those of Stephen and Peter de Prato, England. Hervey de Prato, in 1200 in Normandy, was King John’s “Faithful Knight,” and the custody of Rouen Castle was given to his brother.” In that book, it goes on to detail many Mead’s
3m ago
12 Views

from Beowulf Epic Poem by the Beowulf Poet Translated by .
42 unit 1: the anglo-saxon and medieval periods Hrothgar (hrôthPgärQ), king of the Danes, has built a wonderful mead hall called Herot (hDrQEt), where his subjects congregate and make merry.As this selection opens, a fierce and powerful monster named Grendel invades the mead hall, bringing death and destruction. A powerful monster, living down
5m ago
17 Views

Project 5: Scoville Heat Value of Foods HPLC Analysis of .
analyzing food samples. Explicitly state the prediction and include the assignment of responsibilities for both the calibration curve and food samples. The plan of autosampler positions should also be included. Bring your assigned sample to lab. At least one student
3m ago
1 Views