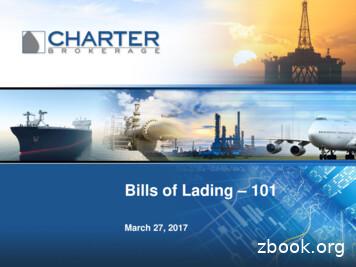 PROPRIETARY & CONFIDENTIALWhat is a Bill of Lading? Document of goods received May be negotiable Must be an agreed upon form Typically issued with 3 originalsA Bill of Lading can also be shown orknown as: BL, B/L or BOL

PROPRIETARY & CONFIDENTIALThe function of a bill of lading Documentary Evidence of Receipt of Cargo Contract of Carriage Document of TitleThe version of the form must be agreed upon.The fine print on a BL dictates what rules, obligations and liabilities the shipperand carrier have to each other.

PROPRIETARY & CONFIDENTIALThe Lifecycle of a bill of ladingIssued to by carrier, or their agents, when cargo is loadedOriginals are released to shipper when freight terms are metBL’s are sometimes negotiated for Letter of Credit funds release as payment for thegoods or the receivers pay the shipper directly for the cost of the merchandiseShippers or their bank sends the original bills of lading to the consignee orreceivers as directed by the buyers once payment for the goods has been madeto the shippersOriginal bills of lading are presented to carrier(The ship’s master or the carrier’s agents at the destination port)Cargo is unloaded and delivered to receivers or the consignee who first presents oneof the original bills of lading. Once one original bill of lading has been presented, allother originals immediately become void

Combinations with Repetition
Example 1 I Suppose there is a bowl containing apples, oranges, and pears I There is at least four of each type of fruit in the bowl I How many ways to select four pieces of fruit from this bowl? I Instructor: Is l Dillig, CS311H: Discrete Mathematics Combinatorics 3 7/26 Example 2 I Consider a cash box containing 1 bills, 2 bills, 5 bills, 10 bills, 20 bills, 50 bills, and 100 bills
2m ago
6 Views

Appendix C Site Specific Soil Management Plan prepared
For this Work, separate Bills of Lading shall be utilized for the transport of non-hazardous waste contaminated soil; soil associated material shall be designated on the Bill of Lading at the portion of the form designated "F. Description of Remediation Waste". Bill of Lading Log S
4m ago
41 Views