AN URBANISING WORLD: THE FUTURE OF GLOBAL CITIES 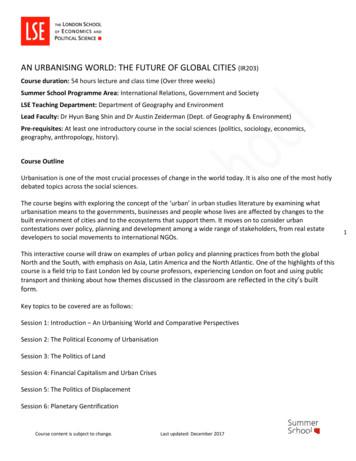 AN URBANISING WORLD: THE FUTURE OF GLOBAL CITIES (IR203)Course duration: 54 hours lecture and class time (Over three weeks)Summer School Programme Area: International Relations, Government and SocietyLSE Teaching Department: Department of Geography and EnvironmentLead Faculty: Dr Hyun Bang Shin and Dr Austin Zeiderman (Dept. of Geography & Environment)Pre-requisites: At least one introductory course in the social sciences (politics, sociology, economics,geography, anthropology, history).Course OutlineUrbanisation is one of the most crucial processes of change in the world today. It is also one of the most hotlydebated topics across the social sciences.The course begins with exploring the concept of the ‘urban’ in urban studies literature by examining whaturbanisation means to the governments, businesses and people whose lives are affected by changes to thebuilt environment of cities and to the ecosystems that support them. It moves on to consider urbancontestations over policy, planning and development among a wide range of stakeholders, from real estatedevelopers to social movements to international NGOs.This interactive course will draw on examples of urban policy and planning practices from both the globalNorth and the South, with emphasis on Asia, Latin America and the North Atlantic. One of the highlights of thiscourse is a field trip to East London led by course professors, experiencing London on foot and using publictransport and thinking about how themes discussed in the classroom are reflected in the city’s builtform.Key topics to be covered are as follows:Session 1: Introduction – An Urbanising World and Comparative PerspectivesSession 2: The Political Economy of UrbanisationSession 3: The Politics of LandSession 4: Financial Capitalism and Urban CrisesSession 5: The Politics of DisplacementSession 6: Planetary GentrificationCourse content is subject to change.Last updated: December 20171

Session 7: Urban InfrastructureSession 8: (a) Urban Ecologies and Climate Change ; (b) Security, Threat, and the CitySession 9: Field Trip in East London (led by course professors)Session 10: Cities and CitizenshipSession 11: Cities and Spectacles – Mega-Projects and Mega-EventsSession 12: Urban Contestations and Struggle for Progressive CitiesCourse outcomesAt the end of the course, students should be able to: Critically understand key contemporary debates on urbanisation and urban development;Display comparative knowledge of urban transformations in different parts of the world;Evaluate the social implications of urbanisation processes;Respond to the future challenges of an urbanising world.Course Structure:- Lectures: 36 hours- Classes: 18 hoursFormative course work:- An essay plan submitted to the class teacher.- This assessment does not count towards the final mark, but is suggested to help students to gaugetheir academic progress during the session.- Submission by Friday of Week 1.Summative assessment:The summative assessment consists of:- An essay of 1,500 words (bibliography does not count). The essay will count for 25% of the final mark.Students must choose a question from among a list distributed at the end of the first week of thecourse. Submission by Friday of Week 2.- A two-hour written exam at the end of the programme (Friday of Week 3). The exam counts for 75% ofthe final mark. The precise time and location of the exam will be circulated during the programme.Course content is subject to change.Last updated: December 20172

General guide to reading:Required reading: all students are expected to read these texts in preparation for each session.Additional reading: students are advised to read these as background reading for each session or inpreparation for their essay writing.There is no single textbook for this course, but you may want to consult one or more of the followingbooks alongside the course reading:-Lees, L., Shin, H.B. and López-Morales, E. (2016) Planetary Gentrification. Cambridge: Polity Press.Zeiderman, A. (2016) Endangered City: The Politics of Security and Risk in Bogotá. Duke UniversityPress.Robinson, J. (2006) Ordinary Cities: Between Modernity and Development. Abingdon: Routledge.Roy, A. and Ong, A. (eds.) (2011) Worlding Cities: Asian Experiments and the Art of Being Global. WileyBlackwell.Park, B-G. et al. (eds.) (2012) Locating Neoliberalism in East Asia: Neoliberalizing Spaces inDevelopmental States. ——————Session 1: Introduction – An Urbanising World and Comparative PerspectivesThe first session includes an overview of the course contents and the key perspectives that will beused throughout the course. The session is also to allow a space for participating students to get toknow each other and with the instructor.Required readingLees, L., Shin, H.B. and López-Morales, E. (2016) Planetary Gentrification. Cambridge: Polity Press.[Read “New Urbanizations"]Robinson, J. (2002) Global and word cities: A view from off the map. International Journal of Urbanand Regional Research 26(3): 531-554Shin, H.B. (2017) Geography: Rethinking the ‘urban’ and urbanization. In: Iossifova, D., Gasparatos, A.and Doll, C. (eds.) Defining the Urban: Interdisciplinary and Professional Perspectives. London:RoutledgeAdditional readingCourse content is subject to change.Last updated: December 20173

Datta, A (2015) New urban utopias of Postcolonial India: Entrepreneurial urbanization in Dholerasmart city, Gujarat. Dialogues in Human Geography 5(1): 3-22Dunford, M. and Yeung, G. (2011) Towards global convergence: Emerging economies, the rise of Chinaand western sunset? European Urban and Regional Studies 18(1): 22-46Olds, K. (2000) Globalization and the Development of Pacific Rim Mega-projects. Oxford: OxfordUniversity Press [Read “Globalization and urban change: Capital, culture, and Pacific Rim megaprojects”]Massey, D. (2007) World City. Cambridge: Polity PressMatthews, G. (2011) Ghetto at the Center of the World: Chungking Mansions, Hong Kong. Chicago;London: The University of Chicago PressParnell, S. and Robinson, J. (2012) (Re)theorizing cities from the global South: Looking beyondneoliberalism. Urban Geography 33(4): 593-617Roy, A. and Ong, A. (2011) Worlding Cities: Asian Experiments and the Art of Being Global. WileyBlackwell [Read “Introduction” and “Conclusion”]Shatkin, G. (2007) Global cities of the South: Emerging perspectives on growth and inequality. Cities24(1): 1-15Session 2: The Political Economy of UrbanisationIn post-industrial cities of the West, property development has gained an increasing degree ofsignificance in urban renewal. In East Asian cities where real estate investment has been one of themain drivers behind their rapid economic growth, urban renewal involving demolition andreconstruction of existing buildings has been at the centre of urban policy-making processes for manyyears. Underlying these processes is the government-developer nexus that brings together propertybased interests that aim to maximise gains from property development. In particular, the issue of landownership and property rights is critical to our understanding of the differences between cities in theglobal East/South and those in other capitalist countries.Required readingHarvey D. (1978) The urban process under capitalism: a framework for analysis. International Journalof Urban and Regional Research 2(1-4): 101-131Course content is subject to change.Last updated: December 20174

Shin, H.B. (2017) Envisioned by the state: Entrepreneurial urbanism and the making of Songdo City,South Korea. In Datta, A. and Shaban, A. (Eds.) Mega-urbanization in the Global South: Fast Cities andNew Urban Utopias of the Postcolonial State. Routledge, pp.83-100Weber, R. (2002) Extracting value from the city: Neoliberalism and urban redevelopment. Antipode34(3): 519-540Session 3: The Politics of LandGiven the importance of the Chinese economy in the world, this session aims to understand theprocess of urbanisation in mainland China, focusing on the concept of the “urbanisation of the localstate”. Here, the land and housing question becomes a key entry point, as it has become an integralcomponent of China’s speculative urban accumulation.Required readingChristophers, B. (2016) The state and financialization of public land in the United Kingdom. 49(1): 6285Haila, A. (2016) Urban Land Rent: Singapore as a Property State. Chichester, West Sussex: John Wiley& Sons [Read “Land Reforms: Practical Solutions and Politics of Land”]Harvey, D. (2006) Paris, Capital of Modernity. New York; London: Routledge. [Read “Rent andPropertied Interest in Paris”]Additional readingBuckley, M. and Hanieh, A. (2013) Diversification by urbanization: Tracing the property-finance nexusin Dubai and the Gulf. International Journal of Urban and Regional Research 38(1): 155-175Christophers, B. (2016) For real: land as capital and commodity. Transactions of the Institute of BritishGeographers 41(2): 134-148Cui, Z. (2011) Partial intimations of the coming whole: The Chongqing experiment in light of thetheories of Henry George, James Meade, and Antonio Gramsci. Modern China 37(6): 646-660Gunnoe, A. (2014) The political economy of institutional landownership: Neorentier society and thefinancialization of land. Rural Sociology 79(4): 478-504Course content is subject to change.Last updated: December 20176

Forrest, R. and Hirayama, Y. (2009) The Uneven impact of neoliberalism on housing opportunities.International Journal of Urban and Regional Research 33(4): 998–101Fujita, K. (2000) Asian crisis, financial systems and urban development. Urban Studies 37(12): 21972216Lapavistsas, C. (2009) Financialised capitalism: Crisis and financial expropriation. HistoricalMaterialism 17(2): 114-148Madden, D. and Marcuse, P. (2016) In Defense of Housing: The Politics of Crisis. London: VersoSession 5: The Politics of DisplacementThis session examines the socio-spatial consequences of spatial restructuring propelled by variousinvestments in the built environment (e.g. urban regeneration, infrastructure development). What arethe experiences of local residents who can be grouped in a number of ways based on their level ofincome, tenure or ownership of property rights? To what extent are the benefits of property(re)development disproportionately shared among local residents? One issue that may come to mindreadily is the displacement of poor residents. What happens to the displacees? How do theirexperiences vary across countries?Required readingPorteous, J.D. and Smith, S.E. (2001) Domicide: The Global Destruction of Home. Montreal &Kensington: McGill-Queen’s University Press. [Read “Introducing Domicide”]Lees, L., Shin, H.B. and López-Morales, E. (2016) Planetary Gentrification. Cambridge: Polity Press.[Read “Mega-gentrification and Displacement”]Marcuse, P. (1985) Gentrification, abandonment and displacement: Connections, causes and policyresponses in New York City. Journal of Urban and Contemporary Law 28: 195-240Additional readingAtkinson, R. (2015) Losing one’s place: Narratives of neighbourhood change, market injustice andsymbolic displacement. Housing, Theory and Society 32(4): 373-388Course content is subject to change.Last updated: December 20178

Celestina, M. (2016) ‘Displacement’ before displacement: Time, place and the case of Rural Urabá.Journal of Latin American Studies 48(2): 367-390Christophers, B. (2010) Geographical knowledges and neoliberal tensions: Compulsory land purchasein the context of contemporary urban redevelopment. Environment and Planning A 42(4): 856-873Hern, M. (2016) What a City is for: Remaking the Politics of Displacement. Cambridge, Massachusetts:The MIT Press.Mobrand, E. (2008) Struggles over unlicensed housing in Seoul, 1960-80. Urban Studies 45(2): 367-389Shao, Q. (2013) Shanghai Gone: Domicide and Defiance in a Chinese Megacity. Lanham: Rowman &LittlefieldShin, H.B. and Kim, S-H. (2016) The developmental state, speculative urbanisation and the politics ofdisplacement in gentrifying Seoul. Urban Studies 53(3): 540-559Session 6: Planetary GentrificationGentrification is first coined by Ruth Glass in the early 1960s, referring to the displacement of poortenants in inner-city London. Born out of the experiences of post-industrial cities in the West, it is alsoa term that has been heavily contested over the years, its definition and applicability to variousemerging urban phenomena challenged. This session aims to review key arguments in thegentrification literature, and explore the extent to which the concept can be applicable to urbanprocesses in the global South and East.Required readingLees, L., Shin, H.B. and López-Morales, E. (2016) Planetary Gentrification. Cambridge: Polity Press.[Read “Introduction” and “Conclusion”]Slater, T. (2006) The Eviction of Critical Perspectives from Gentrification Research. InternationalJournal of Urban and Regional Research 30(4): 737–757Smith, N. (1979) Toward a theory of gentrification: A back to the city movement by capital, notpeople. Journal of the American Planning Association 45(4): 538-548Additional readingCourse content is subject to change.Last updated: December 20179

- Robinson, J. (2006) Ordinary Cities: Between Modernity and Development. Abingdon: Routledge. - Roy, A. and Ong, A. (eds.) (2011) Worlding Cities: Asian . ownership and property rights is critical to our understanding of the differences between cities in the global East/South and

Nonprofit Self-Assessment Checklist
May 02, 2018 · D. Program Evaluation ͟The organization has provided a description of the framework for how each program will be evaluated. The framework should include all the elements below: ͟The evaluation methods are cost-effective for the organization ͟Quantitative and qualitative data is being collected (at Basics tier, data collection must have begun)
1d ago
3 Views