Probability Project: Design Your Own Game 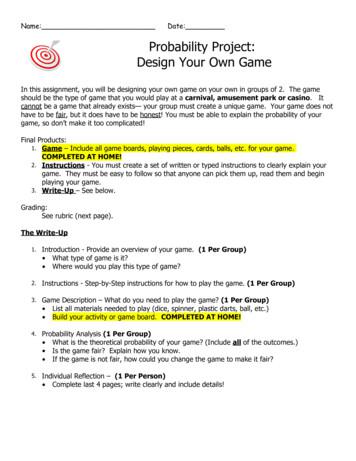 Name:Date:Probability Project:Design Your Own GameIn this assignment, you will be designing your own game on your own in groups of 2. The gameshould be the type of game that you would play at a carnival, amusement park or casino. Itcannot be a game that already exists— your group must create a unique game. Your game does nothave to be fair, but it does have to be honest! You must be able to explain the probability of yourgame, so don’t make it too complicated!Final Products:1. Game – Include all game boards, playing pieces, cards, balls, etc. for your game.COMPLETED AT HOME!2. Instructions - You must create a set of written or typed instructions to clearly explain yourgame. They must be easy to follow so that anyone can pick them up, read them and beginplaying your game.3. Write-Up – See below.Grading:See rubric (next page).The Write-Up1.Introduction - Provide an overview of your game. (1 Per Group) What type of game is it? Where would you play this type of game?2.Instructions - Step-by-Step instructions for how to play the game. (1 Per Group)3.Game Description – What do you need to play the game? (1 Per Group) List all materials needed to play (dice, spinner, plastic darts, ball, etc.) Build your activity or game board. COMPLETED AT HOME!4.Probability Analysis (1 Per Group) What is the theoretical probability of your game? (Include all of the outcomes.) Is the game fair? Explain how you know. If the game is not fair, how could you change the game to make it fair?5.Individual Reflection – (1 Per Person) Complete last 4 pages; write clearly and include details!

Name:Date:Probability Carnival ReflectionIntroductionIn this section describe your game and how you expected the game to go. Why did you expect it to gothat way? (This is your hypothesis). Be sure to include a definition of theoretical probability in this section.

Name:Date:MethodsGive an explanation of how to play the game. What did you do as the game manager and what did yourparticipants do as game players?

Name:Date:ResultsInclude your raw data in an organized manner here. This should include: how many people played yourgame, how many people won or lost, and any observations you made about how the game was going. Youmay show your data in any way you choose, as long is it can easily be read and interpreted.

Name:Date:AnalysisIn this section you will tell how the game went. Did the experimental probability match the theoreticalprobability? What went well? If anything didn’t go as planned be sure to include what went wrong! Howcould you improve this game if we were going to host a second carnival? (Use extra paper if necessary).

Design Your Own Game In this assignment, you will be designing your own game on your own in groups of 2. The game should be the type of game that you would play at a carnival, amusement park or casino. It cannot be a game that already exists— your group must create a unique game. Your game