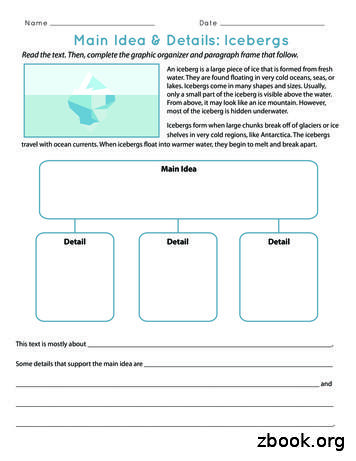 NameDateMain Idea & Details: IcebergsRead the text. Then, complete the graphic organizer and paragraph frame that follow.An iceberg is a large piece of ice that is formed from freshwater. They are found floating in very cold oceans, seas, orlakes. Icebergs come in many shapes and sizes. Usually,only a small part of the iceberg is visible above the water.From above, it may look like an ice mountain. However,most of the iceberg is hidden underwater.Icebergs form when large chunks break off of glaciers or iceshelves in very cold regions, like Antarctica. The icebergstravel with ocean currents. When icebergs float into warmer water, they begin to melt and break apart.Main IdeaDetailDetailDetailThis text is mostly about .Some details that support the main idea areand.

NameDateReading Fiction: Main Idea and DetailsMain IdeaFirst, choose a sentence frame to write about themain idea (what the story is mostly about).DetailsThen, write about two or more details(parts of the story that give more information).In (story title) , the author wants me tounderstand that .When the author says , it tells moreabout the main idea.The main idea of this story is .The details that support the main ideaare and .This story is mostly about .The point of the story is .Directions: Study the graphic organizer.Then, use sentence frames to write aboutthe main idea and details. You may need toadd or take away words when you use thesentence frames.A detail is . Also, .Some details that give more informationare and .DetailDetailLittle Redmeets a wolf inthe woods.The wolfpretends to beLittle Red’sgrandmother.Main IdeaA wolf tries to eatLittle Red RidingHood.DetailDetailA woodsmanhelps LittleRed Riding Hood.The storytakes place ather grandmother’scottage.Find worksheets, games, lessons & more at education.com/resources 2007 - 2020 Education.com

Name:Date:Can You Spot the Main Idea?The main idea is what the story is mostly about. You can find evidence in the story tohelp you determine the main idea.Example: In the story The Three Little Pigs, the main idea is that the pigs build housesand the wolf blows them down.Directions: Read the story and circle the main idea. Then, complete the sentences below.It was the first week of school and Camilla’s new teacher, Ms. Kim, told the class that they would be startinga writing project. She told everyone to take out a piece of paper and write a paragraph about their family.All of the kids started writing quickly, except Camilla. She just stared at her blank paper and didn’t writeanything. She didn’t know much about her family because she just met them! Camilla used to live in Chinaand she didn’t have a family. But, just a couple of months ago, her dads came to China to adopt her. Theysigned some papers and asked her to join their family. Then, she moved to Pennsylvania to live with themand her new brother, Ben. She really liked her new home and her new family. But, she still didn’t know whatshe should write about them. She stared at her paper again, and then she wrote, “I don’t know much aboutmy new family, but I am learning more each day. My dads like to cook and my brother makes me laugh!”Camilla smiled and decided that, when she got home, she would ask her family to help her finish herwriting project.1. The main idea is.2. I know this because in the story it said.Today Mai-Ahn and Thien are at the zoo. They are excited to see lots of wild creatures. Mai-Anh is lookingforward to seeing the tigers, but Thien wants to visit the elephants first. They decide to flip a coin to decide.Mai-Ahn takes a quarter out of her pocket. She tells Thien that if it lands with the “heads” side facing up,they will visit the tigers first. But, if it lands on the “tails” side, they will go see the elephants. Mai-Ahn throwsthe coin into the air. When it lands on the ground, Thien calls out, “Look! It landed on tails!” Mai-Ahn is sadthat she didn’t win the coin toss, but she knows that they will see the tigers later. She picks up the quarterand puts it back in her pocket as she and Thien walk towards the elephants.1. The main idea is.2. I know this because in the story it said.Copyright 2018 Education.com LLC All Rights ReservedMore worksheets at www.education.com/worksheets

Name:Date:Digging In with ResearchWhen you read a nonfiction text you are exposed to a lot of new information. But it is yourjob, as the reader, to determine what information is most important.To determine what is important, you should ask yourself two questions as you read: Why did the author write this text? (author’s purpose) What did they want me to learn? (main idea)While you read, imagine you are digging for treasure. As you dig, you will find three things:The Dirt: This is the information that “fills in” the text. You do not need thisinformation to understand or main idea of the text. Sometimes the “dirt” can getin your way or distract you from finding the information you are looking for.The Chest: This is a supporting detail. It might give you clues about the mainidea or purpose of the article. You should slow down your digging (reading)because you might be close to finding the information you are looking for.Underline the supporting details you find.The Treasure: This is what you’ve been looking for! It is important informationthat will help you determine the purpose or main idea of the text. You shouldstop digging (reading) and pay close attention to this information. Highlightkey words, phrases, or sentences that reveal the purpose or main idea!Hint: You will find more than one “treasure” as you read. Look for three to five pieces ofimportant information to highlight.Copyright 2017 Education.com LLC All Rights ReservedFind worksheets, games, lessons& more at education.com/resourcesMore worksheets at www.education.com/worksheets 2007 - 2020 Education.com

Name:Date:Digging In with ResearchStep 1: Read the text below. Underline supportingdetails. Highlight key words, phrases, or sentencesthat reveal the purpose or main idea of the text.Are pirates real? In the movies, pirates areStep 2: Make a treasure map! In your own words,write the important information you highlighted. known for their ruthless antics in search of treasure.But stories throughout history prove that real pirates were even more cunning than the onesyou’ve seen on the big screen.In 1572, a sea captain named Francis Drakewas licensed by Queen Elizabeth I, of England, tosail as a privateer. A privateer’s commission allowed captains to steal any property belonging to KingPhilip II, of Spain. With his new license, FrancisDrake set off right away with a plan to attack a Spanish settlement, in search of silver and gold. Ayear later, he returned to England with his stolentreasure, making Queen Elizabeth very happy.In addition to stealing from the Spanish,Step 3: Summarize the text. Use your “treasuremap” to write about the main idea and purpose ofthe text.Francis Drake was also instructed by the queen toexplore the northwestern coast of North America insearch of a passage to England. So, in 1577, he setoff for a journey around the globe, making him thefirst English captain to sail around the world.During his voyage, Francis Drake landed in what isnow California, claiming the land for QueenElizabeth. He raided multiple Spanish ports,stealing supplies and valuable goods. Along theway, he even captured a Spanish ship loaded withtreasure. When he returned to England in 1580,Queen Elizabeth knighted him, making him SirFrancis Drake—the most famous pirate in history.Copyright 2017 Education.com LLC All Rights ReservedFind worksheets, games, lessons& more at education.com/resourcesMore worksheets at www.education.com/worksheets 2007 - 2020 Education.com

ReadingFind the Main IdeaFind the main idea in the paragraph below. Write the mainidea in your own words in the space provided. Then, writea concluding sentence for this paragraph.You know that butterflies are insectsthat glide through the air on colorfulwings. Did you know they are alsomasters of disguise? Forexample, the Viceroy butterfly hasevolved to look almost exactly like theViceroymonarch, a poisonous butterfly thatpredators know to avoid. Though theViceroy itself is not poisonous, birds and other predators steerclear, mistaking it for the Monarch. The Buckeye sports“eyespots”, target-shaped spots resembling eyes, on the tips ofits wings. Predators will aim for an eyespot, believing it to be thehead of the Buckeye, but will instead end up with just a wing tip,allowing the Buckeye to escape.Main idea:Concluding sentence:MonarchFind worksheets, games, lessons & more at education.com/resources 2007 - 2020 Education.com

Reading Fiction: Main Idea and Details Main Idea First, choose a sentence frame to write about the main idea (what the story is mostly about). Details Then, write about two or more details (parts of the story that give more information). In _(sto

BETWEEN GRADES 2 AND 3 - Reading Eggs
The main idea is what the text is about. Details help us find the main idea. Circle the correct answers. 1 Which best describes the main idea of the text? a A lion attacked a gnat. b A lion fell down. c A gnat wanted to be a lion. d A gnat attacked a lion. 2 downWhich two details support the main idea
1m ago
12 Views

Personal Narrative
My main idea is a small moment, not a big watermelon idea. _ I have a good title that relates to my main idea. _ My main idea is evident in the first paragraph. _ My story is well organized in the order of what actually happened. _ My conclusion reinforces my main idea. My
1m ago
5 Views

Lesson 15 Name Date PRACTICE BOOK Main Ideas and Details
Analyze the selection to evaluate the main idea and details presented. Use a Web like the one here to organize your thoughts. Then answer the questions below. 1. What is the author’s main idea? Use text evidence to support your answer. 2. How does each paragraph support the main idea in the passage? Deepen Comprehension 170
5m ago
24 Views

MODULE 5 Differentiating Between Main Ideas and
main idea and supporting details: 1. Based on the title of the reading, what do you think the article will be about? 2. Is there one sentence that describes the main idea for this topic? 3. What two words would you use to describe the general idea of the article? 4. What details from
3m ago
71 Views

Reasoning Through Language Arts (RLA) Instructional .
RI.3.2 Determine the main idea of a text; recount the key details and explain how they support the main idea. Read for Main Ideas and Details Playlist (RI.3.2) CRAFT AND STRUCTURE (32%) RI.3.4 Determine the meaning of general academic and domain-specific words and phras
1m ago
27 Views
Popular Tags
Recent Views