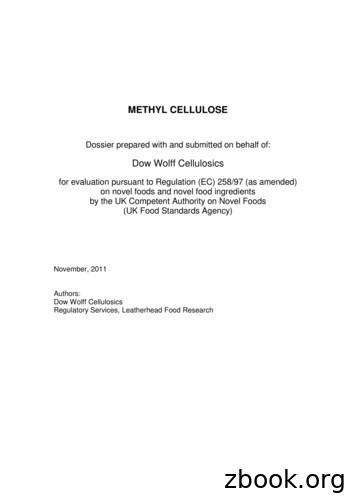 Safety StudiesA review of toxicology data available for methyl cellulose and its analoguesindicates that consumption of up to 6g per day of methyl cellulose is likely tobe tolerated without adverse side effects (Snape, 1989) which is furtherdetailed in Section 11.1.10.1 (p.47, 2nd paragraph).Due to its physical nature, Dow’s methyl cellulose is not believed to pose asignificant choking or overdose hazard. Choking potential of the gel is furtherdetailed in Section 11.2.1.The effect on the human gut regarding gastrointestinal intolerance andlaxation with increased consumption of methyl cellulose is expected to besimilar to any individual consuming a high fibre diet. See section 11.2.3.ConclusionProbabilistic intake estimates, which take variability in the concentration ofmethyl cellulose into account whilst still employing a conservative assumptionof 100% probability of presence, are considered to be more plausible thandeterministic intake estimates.Highest predicted intakes of methyl cellulose as a novel food ingredient usinga probabilistic approach (97.5th percentile; consumers only) are lower than thelowest plausible safety threshold of 6g/day derived from a human study(Snape, 1989). When baseline (probabilistic) intakes of methyl cellulose as afood additive are taken into account, it is likely that combined high levelintakes would still be lower than the plausible safety threshold of 6g/day.On the basis of the available toxicological and safety data, and conservativeintake estimates, the proposed extended use of methyl cellulose as a novelfood ingredient is unlikely to pose a safety concern for humans.5

3 INTRODUCTIONCellulose is a polymer forming the structural basis of the cell walls of plants.Dow Wolff Cellulosics (Dow) produces methyl cellulose using purifiedcellulose extracted from cellulose containing non-genetically modified plantssuch as trees (mainly softwood), which is then partially etherified with methylgroups. It belongs to a group of edible carbohydrate polymers, referring tocompounds that are analogous to those of naturally-occurring dietary fibres.These compounds demonstrate the physiological properties of the respectivematerials for which they are analogous, but are not obtained by eating thewhole part of the native originating plant (Tungland and Meyer, 2002).Methyl cellulose is currently an approved food additive (E 461) in theEuropean Union (EU) under Annex I of Directive 95/2/EC (as amended)(European Commission 1995) and which has been implemented in nationallegislation of all EU Member States. Dow is currently selling methyl cellulosein the EU as E 461 which is derived from the same material (softwood).Recommended usage levels to obtain a desired technological function rangefrom 0.1 to 0.5%. The approval for marketing methyl cellulose in the EU onlyapplies to its use for technological purposes in foodstuffs. It can be used atquantum satis as an emulsifier, stabiliser or thickener.Dow’s different grades of methyl cellulose which gel at different temperaturesare hereafter referred to as methyl cellulose. All these methyl celluloses arethe same substance as specified in the purity criteria for methyl cellulose as afood additive (E 461), only the distribution of the polymer backbone is differentso methyl cellulose can gel in vitro in water at temperature as low as 31 Cinstead of 50 C for traditional methyl cellulose.Dow is proposing to market its methyl cellulose as a novel food ingredient inthe EU as a source of dietary fibre to increase satiety (see further details insection 9, last paragraph) in a limited range of foodstuffs such as ice-cream,flavoured milk drinks, cold desserts, smoothie-type beverages, yogurts, yogurtdrinks and wet soups, at levels ranging from 1.5% to 2%. However, methylcellulose does not have a significant history of consumption within the EU as afood ingredient before 15 May 1997. It would therefore be considered a novelfood ingredient. According to the Novel Foods Regulation, it must be subjectto a pre-market safety assessment before it can be authorised for the EUmarket.Dow is therefore seeking approval under Novel Foods Regulation (EC) No258/97.Following a safety evaluation, the intent is to market methyl cellulose as anovel food ingredient under the SatisfitTM and METHOCELTM trade nameumbrella.7

Methyl cellulose as a novel food ingredient would fall under the novel foodcategory described under Article 1 (2) (e) of Regulation (EC) No. 258/97:‘foods and food ingredients consisting of or isolated from plants and foodingredients isolated from animals, except for foods and food ingredientsobtained by traditional propagating or breeding practices and having a historyof safe food use’.This application has been prepared in accordance with CommissionRecommendation 97/618/EC concerning the scientific information and safetyassessment report required for novel foods (European Commission 1997).This Recommendation divides novel foods into six classes and requiresspecific safety information to be provided for each class by answering specificquestions. Methyl cellulose would be classified under Class 2.2 “ComplexNovel Food from non-GM source, the source of the Novel Food has no historyof food use in the Community”.Commission Recommendation 97/618/EC requires specific safety questionsto be answered for Class 2.2 novel foods under the topics as detailed below:Related dossier sectionwhere answers to safetyquestions have been providedI Specification of the Novel FoodII Effect of the Production Process Applied to theNovel FoodIII History of the Organism Used as the Source ofthe Novel FoodIX Anticipated Intake/Extent of Use of the NovelFoodX Information from Previous Human Exposure tothe Novel Food or Its SourceXI Nutritional Information on the Novel FoodXII Microbiological Information on the Novel FoodXIII Toxicological Information on the Novel Food4567891011Proposed labelling of the novel food ingredient is provided in section 12.8

4 Specification of the Novel Food4.1General DescriptionDow’s food grade methyl cellulose has the polymeric backbone of cellulose, anatural carbohydrate that contains a basic repeating structure ofanhydroglucose units (Figure 1). The number of anhydroglucose units canvary between approximately 100 and 2,000 depending, for example, on thecellulose raw material used.Figure 1 General Chemical Structure Formula of the Repeating Unit ofMethyl CelluloseCellulose has a polymeric backbone with a repeating structure ofanhydroglucose units joined by 1-4 linkages. Each anhydroglucose unitcontains hydroxyl groups at the 2, 3, and 6 positions. Substitution of thesehydroxyls creates cellulose derivatives. For example, treatment of cellulosicfibers with caustic solution, followed with a methylating agent, yields methylcellulose. The fibrous reaction product is purified and ground to a fine uniformpowder (for more details on production process see section 5 below).One property of methyl cellulose is that it is known to exhibit reverse thermalgelation, in other words, methyl cellulose gels at warmer temperatures andforms a liquid again at cooler temperatures. Methyl cellulose can be designedto gel at temperatures of as low as 31 C and as high as 60 C. In theMETHOCEL Cellulose Ethers Technical Handbook (Dow, 2002), methylcellulose is shown that gels with in vitro gelling temperatures in water going ashigh as 50 C. Sarkar (Sarkar, N. 1979) reported on methyl cellulose that gelswith in vitro gelling temperatures in water as high as 50 C. In the US PatentNo. 6,235,893 a process is described to produce methyl cellulose that gelswith in vitro gelling temperatures in water going as low as 31 C.Dow’s methyl cellulose which can gel at different temperatures complies withthe criteria set of E 461. It retains the same average content of methyl groups(degree of substitution, DS) but the distribution of those groups within theglucose units is different. Methyl cellulose with gelation temperatures of as lowas 31 C, and which still falls into E 461 criteria set, is prepared by changingthe reaction kinetics to favor methylation in position 2 and 6 and to disfavor9

position 3. This changed distribution alters the interaction of the glucose unitswithin the polymer chain and also between polymer chains such that gellingcan be obtained at body temperature (or lower) in a controlled fashion (seefurther details in section 5.2 Production process).4.2Analytical InformationIs appropriate analytical information available on potentiallytoxic inherent constituents, external contaminants andnutrients?All Dow’s grades of methyl cellulose, including those that gel as low as 31 Cand as high as 65 C, are specified in the purity criteria for methyl cellulose (E461) as a food additive (European Commission 2008). They are all derivedfrom wood pulp. Table 1 below shows the purity criteria set for E 461 in theEU and how this compares with Dow’s specification for methyl cellulose.Table 1 Comparison of Dow’s Methyl Cellulose with EU Purity CriteriaSet for E 461SynonymsDefinitionsChemical nameChemical formulaMolecular weightE 461 Methyl celluloseCellulose methyl etherDow’s methyl celluloseCellulose methyl etherMethyl cellulose is celluloseobtained directly from naturalstrains of fibrous plant materialand partially etherified withmethyl groupsMethyl ether of celluloseMethyl cellulose is celluloseobtained directly from naturalstrains of fibrous plant materialand partially etherified withmethyl groupsCellulose methyl etherCAS No. – bstitutedanhydroglucoseunits with the following generalformula:C6H7O2 (OR1)(OR2)(OR3)where R1 , R2 , R3each may be one of thefollowing:—H— CH3— or CH2 CH3From about 20,000 to 380,000g/molwherex 0.95 to 1.55y 2.05 to 1.45x y 3.00(y degree of substitution)Macromolecules: from about20000 (n about 100) up to about380,000 g/mol (n about 2,000)Unsubstituted162.14structuralunit:Structural unit with total degreeof substitution of 1.45 : 182.44Structural unit with total degree10

SAMPLE TENURE AND PROMOTION DOSSIER Section I: T & P Overview
This sample dossier may be helpful in providing guidance in the preparation of tenure and promotion dossiers. Since faculty members have a variety of experiences and accomplishments, each faculty member’s dossier will be a unique document. Please note that the dossier was divided into six sections and appropriate supporting documents were provided in the appendices located at the end of each .
8m ago
21 Views

SOME EXPONENTS OF THE S TECHNIQUE IN .
of just what a stream-of-consciousness novel really is. Numerous labels have been offered in efforts to define this unique approach: the "thought-stream novel" or 2 3 simply the "stream novel;" the "time novel;" the Shiv K. Kumar, Bergson and the Stream of Conscious ness Novel (New York, 1963), p. 2. Paul West, The Modern Novel (London, 1965 .
8m ago
11 Views

A review on food safety and food hygiene studies in Ghana
catering and other forms of food hazards. The media currently serves as the main source for reporting of food borne diseases. Food establishments and other sources contributing to food borne diseases included . Food Control 47 (2015) 92e97. food safety. The Food and Drugs Authority (FDA)
1m ago
11 Views

What is Food Chemistry - University of Nebraska–Lincoln
What is food chemistry? Food Science deals with the production, processing, distribution, preparation, evaluation, and utilization of food. Food chemists work with plants that have been harvested for food, and animals that have been slaughtered for food. Food chemists are concerned with how these food products are processed, prepared, and .
8m ago
69 Views
Popular Tags
Recent Views