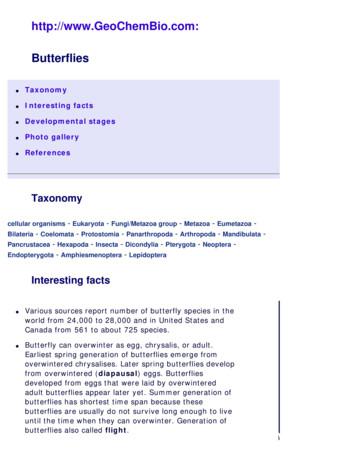 Bechina Purplewing (Eunica bechina) lays eggs on antdefended plant Caryocar brasiliense (Pequi, also called"souari nut"). Experiments with ants pinned to leavesshown that the butterflies avoid ovipositing on plantparts occupied by ants, however, presence of nonpredatory sap-sucking insects did not affect theoviposition. This is the first demonstration thatherbivorous insects can recognize predatory species byusing visual clues. This interesting decision-makingbehavioral adaptation permits specialization on a risky,ant-defended host.In fall, Eastern North American monarch juvenilebutterflies undertake a spectacular long-range migrationto Mexico, during which they determinately fly in thesouth/southwesterly direction. Reproductive spring andsummer butterflies, in contrast, are unable to exhibitdirectional, oriented flight. Fall-born juvenile butterfliesare hormone deficient, which leads to reproductivearrest and increased longevity. Also, gene expressionanalysis reveals a suite of 40 genes whose differentialexpression in brain correlates with directional flightbehavior.While most butterflies feed on nectar, in tropical forestsmany tropical species feed on fruit. Based on variation inproboscis morphology and feeding behavior, fruitfeeding butterflies can be divided in two groups: piercingbutterflies that are efficient at foraging on softsubstrates, and sweeping butterflies that use a widerange of substrates, but have lower intake rates.Lepidoptera are relatively short-lived. However, one fieldmark-recapture study of butterflies in Uganda had shownthat fruit-feeding butterflies enjoy unusually long lifespan that ranged from 67 (Bicyclus auricruda) to 293days (Euphaedra medon).Butterflies wing coloration consists of so-calledstructural colors. In contrast with chemical colors,which depend on pigments, structural colors are theresult of the interaction of the light (multiple reflections)with physical structures of the size comparable to thewavelength of light. Such colors usually causeiridescence. The source of butterfly's wing structuralcolors are scales: there are normally two layers of

chitinous scales tiled distally across each of the dorsaland ventral wing surfaces: the basal scales, which liedirectly above the wing lamina, and the cover scales,which overlay them. Usually the cover scales areresponsible for producing the reflected colors. Thescales' components (photonic structures) form thebasis for a wide diversity of complex architectures thataccounts for such a great variety of butterflies' wingcoloration. Eyespots are found in a variety of animals. Manybutterfly species sport especially prominent eyespots ontheir wings. Eyespots are generally defined as circular,often occurring in bilaterally symmetrical pairs, markingson the body of an animal, composed of colorscontrasting with the surrounding body area. Evolution ofeyespots as antipredator strategy has been discussedsince 19th century. Two main theories had beenadvanced: intimidation hypothesis and deflectionhypothesis. According to the first theory, largeconspicuous eyespots located on the dorsal surface ofthe wing are usually seen only when the butterflysuddenly opens its wings. These eyespots mayintimidate predators by several mechanisms: byresemblance with its enemy eyes (mimicry), by suddenchange in appearance, or by advertizing the large size ofthe prey animal. According to the second theory, theeyespots function in drawing predatory attack to lessvital region of an animal's body. Both theories have theirmerits and some confirming experiments wereperformed. However, often, results were contradictory orlacking proper controls, as a result, both theories receivetheir share of criticism, and the role of many eyespots inthe survival remains unknown.Developmental stages (life cycle)All butterflies pass four main stages: egg, larva, pupa, adult. Time framevaries between species. In summer, monarch butterfly's life cycle from eggto adult takes about 6-8 weeks. Migrating and overwintering fall monarchbutterflies live for 5-8 months depending on the time when they awakenedand distance they had to cover during their migration.

eggFemale butterflies lay their eggs on host plants thatare one species or group of related species. Eggs aretiny and are laid singly or in small clutches. They arefirmly glued to the surface. Non-diapausal eggs usuallyhatch in about a week after oviposition. Most butterflyspecies lay between 100 and 300 eggs. larvalLarval stage of butterflies is called caterpillar. Firstmeal of tiny 1st instar caterpillar usually is its own eggshell. Catterpillars undergo 4 moltings until they reach5th instar. Fourth and fifth instar caterpillars may lookquite differently from first three instars and up to30,000 times larger than the first instar. Mainoccupation of all caterpillars is eating. Because theyhave a lots of enemies (birds, lizards, ants, frogs, andothers) many caterpillars have an impressive arsenal ofprotective mechanisms. Caterpillar stage can last from2 weeks to up to a month, and this is the longest lifestage in many butterflies and moths. chrysalisChrysalis is a pupa stage of butterflies and moths.After 5th instar molts, its new skin becomes rigid outershell of the pupa. Chrysalis is attached to thesubstratum (such as tree bark) by cremaster (asupport hook or a cluster of hooks), and, sometimes, bya silky girdle. Unlike many moths, butterflies do notspin a cocoon. Inside the chrysalis, the caterpillarundergoes dramatic metamorphosis, during whichanatomical structures of the future butterfly graduallydevelop including wings and proboscis. About a daybefore the adult butterfly emerges, the chrysalisbecomes transparent and adult butterfly's colorsbecome visible. Pupa stage takes 10-14 days dependingon the butterfly species and temperature. imago

Butterflies in the stomah
Jan 24, 2017 · Butterflies in the Stomach: Part I – The Monarchs’ Vanishing Act Dr. John Losey, an expert in insect conservation biology, was concerned about the butterflies. Working at Cornell University in Ithaca, New York he noticed fewer and fewer iconic monarch butterflies every year
5m ago
31 Views

Lepidoptera of North America 6 Butterflies of Oregon Their .
taxonomy, distribution and biology of Oregon’s butterfly species can be attained. This is but an initial attempt to synthesize the available information on Oregon’s butterflies, identify areas where further research is necessary, and sti
5m ago
7 Views

Biology: Exploring Life Chapter - Pearson Education
things, such as snakes or butterflies, although we recognize that each group includes many dif-ferent species. And we often cluster groups into broader categories, such as reptiles (which include snakes) and insects (which include butterflies). Taxonomy, the branch of biology that names and clas
5m ago
5 Views

FEMwiki: crowdsourcing semantic taxonomy and wiki input to .
wiki-style repository using crowdsourcing. FEMwiki framework is structured using a domain taxonomy editable by users in the same way as the actual content. The taxonomy browser on the front page of the wiki allows users to immediately see an
5m ago
3 Views

Lecture 2 Bayesian linear regression
Figure 2 A schematic illustration of the taxonomy and example test set images. , A subset of the top of the tree-structured taxonomy of skin a disease. The full taxonomy contains 2,032 diseases and is organized based on visual and
5m ago
71 Views

Organizational Type 2 NPI Application Procedure
taxonomy (codes designating the provider type, classification and specialization). Taxonomy selection is done in two steps – first at a high level (provider type) and second is at the detail level (area of specialization). Standard Response- A taxonomy code is required for all provider/specialty codes in which your provider bill under.
6m ago
12 Views
Popular Tags
Recent Views