What Is Food Chemistry - University Of Nebraska–Lincoln 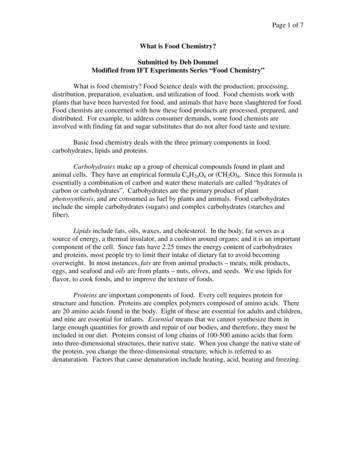 Page 1 of 7What is Food Chemistry?Submitted by Deb DommelModified from IFT Experiments Series “Food Chemistry”What is food chemistry? Food Science deals with the production, processing,distribution, preparation, evaluation, and utilization of food. Food chemists work withplants that have been harvested for food, and animals that have been slaughtered for food.Food chemists are concerned with how these food products are processed, prepared, anddistributed. For example, to address consumer demands, some food chemists areinvolved with finding fat and sugar substitutes that do not alter food taste and texture.Basic food chemistry deals with the three primary components in food:carbohydrates, lipids and proteins.Carbohydrates make up a group of chemical compounds found in plant andanimal cells. They have an empirical formula CnH2nOn or (CH2O)n. Since this formula isessentially a combination of carbon and water these materials are called “hydrates ofcarbon or carbohydrates”. Carbohydrates are the primary product of plantphotosynthesis, and are consumed as fuel by plants and animals. Food carbohydratesinclude the simple carbohydrates (sugars) and complex carbohydrates (starches andfiber).Lipids include fats, oils, waxes, and cholesterol. In the body, fat serves as asource of energy, a thermal insulator, and a cushion around organs; and it is an importantcomponent of the cell. Since fats have 2.25 times the energy content of carbohydratesand proteins, most people try to limit their intake of dietary fat to avoid becomingoverweight. In most instances, fats are from animal products – meats, milk products,eggs, and seafood and oils are from plants – nuts, olives, and seeds. We use lipids forflavor, to cook foods, and to improve the texture of foods.Proteins are important components of food. Every cell requires protein forstructure and function. Proteins are complex polymers composed of amino acids. Thereare 20 amino acids found in the body. Eight of these are essential for adults and children,and nine are essential for infants. Essential means that we cannot synthesize them inlarge enough quantities for growth and repair of our bodies, and therefore, they must beincluded in our diet. Proteins consist of long chains of 100-500 amino acids that forminto three-dimensional structures, their native state. When you change the native state ofthe protein, you change the three-dimensional structure, which is referred to asdenaturation. Factors that cause denaturation include heating, acid, beating and freezing.

Page 2 of 7Vocabulary – Food Chemistry Amino acids – contain carbon, hydrogen, nitrogen and sometimes sulfur andserve as the monomers to make peptides and proteins. Amino acids have a basicstructure that includes an amino group (NH2) and a carboxyl group (COOH)attached to a carbon atom. There are 20 amino acids found in the body. Amylase – an enzyme (protein) in saliva that breaks down starch. Antioxidant – substance that prevents or slows down oxidation; inhibits reactionspromoted by oxygen; often used as a preservative. Carbohydrate – a compound of carbon and water. Carbohydrates are the mostabundant of all carbon-containing compounds, composing nearly three-fourths ofthe dry mass of all plant life on earth. It is the product of photosynthesis.Examples: glucose, sucrose (table sugar), starch, and cellulose. Casein – a protein from milk. Coagulation – transformation of a liquid into a soft or solid mass. Denatured – changed from its natural state. In a denatured protein, itscharacteristics or properties have been altered in some way, by heat, chemicals, orenzymatic action, resulting in the loss of its biological activity. Digestion – the chemical breakdown of large food compounds into smallermolecules that can be absorbed by the intestines in humans and animals. Thesmaller food molecules travel in the blood and are used by cells to make othercomponents or produce energy needed by the body. Digestion begins in themouth as salivary amylase begins to break down starch into simple sugars. Itinvolves the hydrolysis of proteins to amino acids. Emulsion –a property where two liquids are evenly spread out in each other, yetnot dissolved in each other. Oil and water form the most common emulsions, andmilk is an emulsion of butterfat in water. Emulsions are important in theproduction of foods that contain water and fat, such as mayonnaise or margarine.These products require the addition of an emulsifier, to stabilize food emulsions. Enzymatic browning – a biochemical process in which fruit or vegetable tissuesturn brown when exposed to oxygen. This process is catalyzed by polyphenoloxidase. Enzymes – protein catalysts, which control specific chemical reactions in livingsystems (plants and animals). Enzymes are active at low concentrations.

Page 3 of 7 Ester bonds – bonds between fatty acids and glycerol molecules. Fatty acid – building blocks of fats, having hydrogen atoms attached to chains ofcarbon atoms and a oxygen containing carbonyl group (-C O). Fatty acids arefound in every cell of the human body. Glycerol – backbone for fatty acid molecules. Glucose – a simple sugar (C6H12O6) and the primary source of energy for allmammals and many plants. It is also known as dextrose, grape sugar, and cornsugar. It is about half as sweet as table sugar. Hormones – substances that can influence enzyme action, metabolism, andphysiology. Insoluble – not capable of being dissolved. Fats are insoluble in water. On theother hand, sugar is soluble in water unless more is added than what a certainvolume of water can dissolve, which means that the solvent has become saturatedwith sugar. Lecithin – emulsifier found in eggs and soybean oil. Lipids – compounds commonly of fatty acids and glycerol. Lipids are the mostefficient source of fuel in living things. Food lipids are divided into 1) fats,which usually come from animal sources and are solid at room temperature; and2) oils, which usually come from plant sources and are liquid at roomtemperature. Another type of lipid is cholesterol. Cholesterol is a sterolcompound made by animals and is used to make certain steroid hormones in thebody. It is not found in plants. Melanin – any of a group of brown or black pigments occurring in plants andanimals. Organic – related to the branch of chemistry dealing with carbon compounds.Though all living things contain carbon and thus are considered to be organic,other carbon-containing compounds have been produced in the laboratory. Peptide bonds – covalent bonds between two amino acid molecules. Peptides – short chains of amino acids. Photosynthesis – process by which a plant uses water and carbon dioxide toproduce a simple sugar (glucose) and oxygen. Plants store excess sugar as starch. Polymers – contain ten or more monomers. Starch is a polymer of the monomerglucose. A protein is a polymer of amino acids.

Page 4 of 7 Polyphenol oxidase – a copper-containing enzyme, also called phenolase, thatcatalyzes the oxidation of phenolic compounds contained in plant tissue.Example – it speeds the process of browning of cut apple slices. Polyunsaturated – fatty acids that have multiple double bonds. Proteins – complex polymers composed of amino acid monomers. Someexamples of protein are muscle, hair, skin, hormones, and enzymes. Rennin – enzyme used to make cheese. Shortening – crystalline form of a solid fat. Soluble – capable of being dissolved. Gases or solids that dissolve are calledsolutes, while the liquid that does the dissolving is called the solvent. Likesubstances are usually soluble in like solvents. Starch – a polymer of glucose. It is a complex carbohydrate found in greenplants and an important source of energy for animals and humans. During theday, green plants store energy by converting glucose to starch. At night, plantsconvert starch back to glucose for growth. Triacylglycerol - a lipid compound consisting of three fatty acids linked to oneglycerol molecule. This compound is an important source of energy for thehuman body. Vegetable oils – come from plants like corn or soybeans and are an importantsource of polyunsaturated fats.

Page 5 of 7NAMEFreaky Fats: Fill in the blank spaces with the appropriate terms to complete thesentences. Solve hidden message by entering the boxed letters in the spaces at the bottomof the page.1.are long chains of carbon and hydrogen atoms that combine with glycerolmolecules to form a lipid.2.extracted from olives, canola, and corn are plant lipids and are liquid at roomtemperature.3.is a phospholipid emulsifier found in eggs and soybean oil.4.are found between the fatty acids and the glycerol molecules in triacylglycerols.5.is a crystalline form of solid fat.6.are used to prevent the cocoa butter from separating out of chocolate bars.7.fatty acids have multiple double bonds.8.molecules form the backbone of attachment for fatty acid molecules.9.fat is saturated because it contains all single bonds and is solid at roomtemperature.10.oils like corn and soybean are important food sources of polyunsaturated fattyacids in our food supply.HIDDEN MESSAGE:In the United States, this once popular oil is no longer used by the food industry as aningredient, because it was reported to increase blood cholesterol level. It was usedprimarily in cookies, cakes, and snack foods.

Page 6 of 7NAMEPowerful Proteins: Fill in the blank spaces with the appropriate terms to complete thesentences. Solve the hidden message by entering the boxed letters in the spaces at thebottom of the page.1.are short chains of amino acids.2.of amino acids make up protein molecules.3.are the building blocks of proteins.4.can influence enzyme action, metabolism, and physiology.5.is a proteolytic enzyme that is used to make cheese.6.is a milk protein.7.involves the hydrolysis of proteins to amino acids.8.is a protein enzyme that breaks down starch in the mouth.9.is the transformation of a liquid into a soft semi-solid or solid mass.10.proteins are used for their foaming properties in desserts, cakes, and whippedtoppings.HIDDEN MESSAGE:Elementary school children frequently use this casein-based adhesive that was introducedby Borden over 50 years ago. Hint: There is a picture of Elsie the cow on thecontainer.

Page 7 of 7Secret Code for “Food Chemistry”Name:All these sentences have one word written in a secret code.Decode these words.1.Starch is a of glucose.ktnuydb2.Amino acids are bound together by bonds to form proteins.kdkrjgd3.A protein has been changed from its natural state byheat, chemicals, or enzymes.gdihrlbdg4.The chemical breakdown of the food we eat, or ,begins in the mouth.gjadxrjti5.Amino acids are the basic building blocks of .kbtrdjix6.The primary source of energy for all mammals is , a simplesugar.anumtxd7.Food are divided into two groups: fats, which come fromanimals and oils, which come from plants.njkjgx8.Fats are in water, which means they will not dissolvein water.jixtnlond9.Starch and sugar are two examples of ,compounds of carbon and water.mhbotqugbhrdx10.The process by which fruits and vegetables turn brown is calledbrowning.dipuyhrjm

Standard 3.2.2 Food Safety Practices and General Requirements
6 Food storage 7 Food processing 8 Food display 9 Food packaging 10 Food transportation . substantial transformation of food or the sale or service of food directly to the . take all necessary steps to prevent the likelihood of food being contaminated; and
6m ago
196 Views