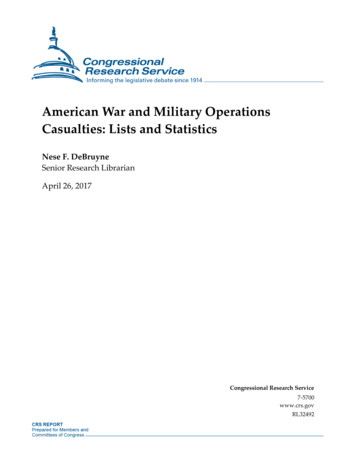 American War and Military Operations Casualties: Lists and StatisticsIntroductionThis report provides war casualty statistics. It includes data tables containing the number offatalities and the number of wounded among American military personnel who served in principalwars and combat actions from 1775 to the present. It also includes information such as race andethnicity, gender, branch of service, and, in some cases, detailed information on types ofcasualties and causes of death.Casualty statistics for wars that ended long ago are updated periodically, sometimes yearly. Theseupdates almost always reflect the identification of remains of persons previously listed as missingin action and the reclassification of those persons as dead. Other reasons, much less frequent,include the discovery of errors in casualty records for individuals or categories such as race andethnicity.Casualty StatisticsU.S. casualty statistics are information on war fighters who have fallen in global or regionalconflicts involving the United States. The data are gathered on deceased, wounded, ill, or injuredactive duty U.S. military personnel and Guard/Reservists. The Defense Casualty Analysis System(DCAS) is maintained by the Defense Manpower Data Center (DMDC).Casualty statistics for conflicts prior to the Persian Gulf War (Desert Shield and Desert Storm) areupdated periodically by the DCAS of the DMDC. Casualty figures for Operation EnduringFreedom (OEF), Operation Iraqi Freedom (OIF), Operation New Dawn (OND), OperationInherent Resolve (OIR), and Operation Freedom’s Sentinel (OFS) are updated daily. Links to thesources for casualty figures appear below each table in this report.Table 1 lists casualty statistics for battles, attacks, or operations for which the CongressionalResearch Service (CRS) receives numerous requests.Table 1. Principal Wars or Conflicts in Which the United States Participated:U.S. Military Personnel Serving and Casualties(1775-1991)CasualtiesWar or ConflictRevolutionary Warb1775-1783War of 1812c1812-1815WarcMexican1846-1848Congressional Research ServiceBranch DeathsWounds ,1021

American War and Military Operations Casualties: Lists and StatisticsCasualtiesWar or ConflictBranch DeathsWounds NotMortalaCare: 37,202Persian Gulf Waro1990-1991Air Force1,740,0002,5861,745841Hosp. CareReq’d: 931No HospitalCare: 354Navy669,0005665012Marines213,00068244492Air Force561,0003520159Source: Defense Casualty Analysis System (DCAS), https://www.dmdc.osd.mil/dcas/pages/report principal wars.xhtml.Notes: Data prior to World War I are based on incomplete records in many cases. Casualty data are confinedto dead and wounded and, therefore, exclude personnel captured or missing in action who were subsequentlyreturned to military control.a. Marine Corps data for World War II, the Spanish-American War, and prior wars represent the number ofindividuals wounded, whereas all other data in this column represent the total number (incidence) ofwounds.b. Number serving not known, but estimates range from 184,000 to 250,000.c. As reported by the Commissioner of Pensions in the annual report for FY1903.d. The Civil War (1861-1865) produced the most American casualties, when both Union statistics andConfederate estimates are taken into account.e. Authoritative statistics for the Confederate forces are not available. Estimates of the number who servedrange from 600,000 to 1,500,000. The final report of the Provost Marshal General, 1863-1866, indicated133,821 Confederate deaths (74,524 battle and 59,297 other) based upon incomplete returns. In addition,an estimated 26,000 to 31,000 Confederate personnel died in Union prisons.f.The Marine Corps number serving is included in the Navy total.g. Number serving covers the period April 21, 1898, to August 13, 1898, whereas dead and wounded data arefor the period May 1, 1898, to August 31, 1898. Active hostilities ceased on August 13, 1898, butratifications of the Treaty of Peace were not exchanged between the United States and Spain until April 11,1899.h. Includes air service. Battle deaths and wounds not mortal include casualties suffered by American forces innorthern Russia to August 25, 1919, and in Siberia to April 1, 1920. Other deaths cover the period fromApril 1, 1917, to December 31, 1918.i.World War II was the first war in which there were more American battle casualties than deaths fromother causes, such as accidents, disease, and infections.j.Data are for the period December 1, 1941, through December 31, 1946, when hostilities were officiallyterminated by presidential proclamation, but a few battle deaths or wounds not mortal were incurred afterthe Japanese acceptance of the Allied peace terms on August 14, 1945. Numbers serving from December 1,1941, through August 31, 1945, were as follows: Total 14,903,213; Army 10,420,000; Navy 3,883,520; andMarine Corps 599,693.k. Includes Army air forces, also known as the Army Air Corps.l.Battle deaths and wounds not mortal include casualties incurred in October 1941 due to hostile action.m. Worldwide military deaths during the Korean War totaled 54,246. In-theater casualty records are updatedannually.n. Number serving covers the period August 5, 1964 (“Vietnam era” begins), through January 27, 1973 (dateof cease-fire). Deaths include the period November 1, 1955 (commencement date for the MilitaryCongressional Research Service3

American War and Military Operations Casualties: Lists and Statisticso.Assistance Advisory Group); through May 15, 1975 (date last American servicemembers left SoutheastAsia). Casualty records are updated annually, including current deaths that are directly attributed to combatin the Vietnam Conflict. Additional detail shows the number of wounded-in-action servicemembers notrequiring hospital care.For this conflict, Coast Guard numbers are included with Navy. Report does not include oneservicemember missing in action (Captain Michael “Scott” Speicher, whose remains were recovered in Iraqin 2009).Table 2. Worldwide U.S. Active Duty Military Deaths in Selected Military 03Nonhostile11000Total1912403Hostile2318401Desert ShieldNonhostile842136918Desert StormHostile1489862024Nonhostile15110514626Desert tary Operation/IncidentCasualtyTypeIranian Hostage Rescue MissionApril 25, 1980NonhostileaLebanon PeacekeepingAugust 25, 1982-February 26, 1984HostilebUrgent Fury, Grenada1983Just Cause, Panama1989NonhostilePersian Gulf War1990-1991Desert Shield and Desert StormRestore Hope andSomalia,1992-1994UNOSOMc,Uphold Democracy, Haiti1994-1996Source: DCAS, https://www.dmdc.osd.mil/dcas/pages/report operations.xhtml.a. According to the Department of Defense Dictionary of Military and Associated Terms, as amended throughAugust 31, 2005, a nonhostile casualty is a casualty that is not directly attributable to hostile action orterrorist activity, such as casualties due to the elements, self-inflicted wounds, or combat fatigue. Thecurrent version of the Dictionary of Military and Associated Terms, as amended through July 16, 2014, uses theterm nonbattle casualty for nonhostile casualty. See http://www.dtic.mil/doctrine/new pubs/jp1 02.pdf.b. The dictionary named above defines a hostile casualty as a person who is the victim of a terrorist activity orwho becomes a casualty in action. In action characterizes the casualty as having been the direct result ofhostile action, sustained in combat or relating thereto, or sustained going to or returning from a combatmission provided the occurrence was directly related to hostile action. Included are persons killed orwounded mistakenly or accidentally by friendly fire directed at a hostile force or what is thought to be ahostile force. However, not to be considered as sustained in action and not to be interpreted as hostileCongressional Research Service4

American War and Military Operations Casualties: Lists and Statisticsc.casualties are injuries or death due to the elements, self-inflicted wounds, combat fatigue, and, except inunusual cases, wounds or death inflicted by a friendly force while the individual is in an absent-without-leave,deserter, or dropped-from-rolls status or is voluntarily absent from a place of duty.United Nations Operation in Somalia (April 1992-March 1993).Table 3. Active Duty Military Deaths: Race/Ethnicity Summary(as of July 25, 2009)Race/EthnicityNumber of DeathsKorean WarVietnam ConflictPersian Gulf WarFMFMFMAmerican Indian orAlaska Native0104022603Asian0241013901Black or AfricanAmerican03,07507,243363Hispanic or Latino03060001Hispanic or Latino—One or More Races05760350014More Than One Raceor Unknown02,853020403Native Hawaiian orPacific ,572858,21715367FMFMFMAmerican Indian orAlaska Native00.300.400.8Asian00.700.200.3Black or AfricanAmerican08.4012.420.017.2Hispanic or Latino00.80000.3Hispanic or Latino—One or More Races01.600.603.8More Than One Raceor Unknown07.800.400.8Native Hawaiian orPacific ageaSource: Defense Manpower Data Center (DMDC), OMB-WC.pdf.Note: Prior to the Korean War, race often went untracked. In the few cases in which race was tracked orrecorded, soldiers were given a choice between some variation of “white” or “black”; categories such as“Hispanic or Latino,” “Asian,” or “Native American” were not used. “F” indicates female, and “M” indicates male.In 2010, Census changed Hispanic as a race to an ethnicity. The definition of Hispanic of Latino origin used in the2010 Census was as follows: “Hispanic or Ltino” refers to a person of Cuban, Mexican, Puerto Rican, South orCongressional Research Service5

Branches of Military Power Point - Veterans Affairs
Navy This branch of our nation’s armed services conducts military operations at sea, world-wide. According to the Department of Defense, its focus is “maintaining the freedom of the seas, deterring aggression, and achieving victory at war.” Like the Air Force, the Navy has many aircraft to assist with protecting the seas.File Size: 959KBPage Count: 12Explore furtherUnderstanding the 5 Branches of US Military - US Militaryusmilitary.comBasic Branches of the United States Armylibarts.hamptonu.eduU.S. National Military rmy.milArmy Branches Military Science - SOU Homeinside.sou.eduWhat Are the Branches of the US Military? commended to you b
5d ago
2 Views

The 2003 Iraq War: Operations, Causes, and Consequences
light on the consequences of the war on the political, economic, social, and humanitarian levels. Finally, the true intentions of the war are speculated. Keywords –Political Science, Warfare, Iraq War 2003, Global War on Terrorism I. INTRODUCTION The Iraq war, sometimes known as the Third Gulf War, began on March 20, 2003 with the invasion of
5m ago
14 Views

Military - United States Department of State
military forces do not cooperate with Russian military forces. However, Section 1232 does not purport to limit military-to-military discussions with Russia to de-conflict military operations in Syria to reduce the risk of interference, miscalculation, or unintended escalation
6m ago
53 Views

Great War, Civil War, and Recovery: Russia’s National .
Great War than was previously thought; in the Civil War it did correspondingly worse; war losses persisted into peacetime, and were not fully restored under the New Economic Policy. We compare this experience across regions and over time. The Great War and Civil War produced the deepest economic trauma of Russia’s troubled twentieth century.
6m ago
16 Views

U.S. Wars of the 1900s - Home USCIS
has fought in several other wars: the Korean War, the Vietnam War and the Persian Gulf War. On the chart below, work with your group and write down everything you know about each war. Then read more information about each war on the next pages. World War I World War II
4m ago
97 Views

Nomos of Border-Making Discourses: The Chaco War, League .
Chaco War (1932-1935), a devastating border war that was the first instance of total war in the Americas. The Chaco War is considered both the “first modern war of South America” and the “last war of colonization of the free Indian territories” as it involved the indiscriminate bombing of both soldiers and the
7m ago
28 Views

World War I - Pre-war crises
Pre-war Crises Immediate Cause Course of the War Results of the War World War I Pre-war Crises International Crises (1905-1913) Early in the twentieth century, the European powers had formed themselves into two rival groups: the TRIPLE ENTENTE versus the TRIPLE ALLIANCE. The policies of these groups began to clash in many parts of the world.
6m ago
17 Views
Popular Tags
Recent Views