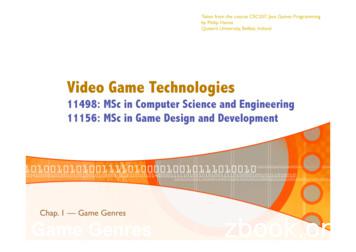 Game GenresDefinitions (taken from Wikipedia) A computer game is a computer-controlled game. A video game is a computer game where a video display such as a monitor ortelevision is the primary feedback device. The phrase interactive entertainment is the formal reference to computerand video games. In common usage:–Computer game or a PC game is played on a PC–Console game is played on a device specifically designed for gaming–Video game has evolved into a catchall phrase that encompasses the above alongwith any game made for mobile phones, PDAs, etc.

Game GenresAdventure games Typically the player is the protagonist of a storyand in order to progress must solve puzzles. Thepuzzles can often involve manipulating andinteracting with in-game objects, characters, etc. Text-based adventures and graphical Examples:–Zork–King’s Quest–Grim Fandango–FahrenheitYou can play the original Zork at:http://thcnet.net/error/index.php

Game GenresAction games A number of other action-oriented genres can be broadlyclassified as belonging to this genre. Action games aretypified by fast-paced events and movement which oftenhave to be performed reflexively. Games such as Pong and Space Invaders initiallydefined the genre.

Game GenresAction-adventure games Action-adventure games can be described in terms of ablend of the characteristics associated with bothadventure and action games, i.e. often involving bothexploration and puzzle solving alongside fast-paced actionsequences. Adventure on Atari 2600 can be considered as initiallydefining this genre. Other notable (more recent) examples include:–Legend of Zelda–Jak 3–Metroid Prime 2

Game GenresPlatform games aka platformers This genre often requires the protagonist to run and jumpbetween surfaces (i.e. platforms) whilst avoiding gameobjects and the detrimental effects of gravity. Traditionally, platform games were side-on 2D inperspective and very popular on earlier gaming platforms. The genre has declined in popularity in recent years,although some titles have successfully redefined the genreto include 3D environments. Exemplos:–Pitfall!––––Super Mario BrosSonic the HedgehogSuper Mario 64Tomb Raider–Prince of Persia

Game GenresFirst-person shooter (FPS) games Action games where the player is “behind the eyes” of thegame character in a first-person perspective. Although anumber of FPS games also support third-person views. Most FPSs are fast-paced and typically require actions to beperformed reflexively. Notable examples include:–Wolfenstein 3D–DOOM–Half-Life–Far Cry–F.E.A.R.

Game GenresTurn-based strategy games Turn-based games share similar aims to real-time strategygames although players take turns in much the same was aswith many traditional board games. Notable examples include: –Civilization–X-COM–Master of Orion–Jagged AllianceThere is a recent trend towards hybrid games that includeelements of both turn-based and real-time games, e.g.Rome Total War

Game GenresMassively multiplayer onlinerole-playing games (MMRPGs) Typically a RPG set in a persistent virtual world populatedby thousands of other players. MMORPGs can be viewedas evolving from text-based MUDs in mid-to-late 1990s. The first highly popular MMORPG was Ultima Onlinewhilst World of Warcraft holds the honor of being thecurrent most popular. Aside: Apart from MMOPRGs there are also sizeablecommunities around online first person shooters andstrategy games, e.g. Battlefield 2

Game GenresStealth games Games which can be defined by a focus on subterfuge and/or precision play. Notable examples include:–Metal Gear–Thief–Splinter Cell

Game GenresSurvival horror games Often an action-adventure or first-person shooterwith a focus on fear and survival and adoptingmany of the elements of traditional horror fiction. Alone in the Dark provides a notable earlyexample, whilst the Resident Evil series is acurrent notable example.

Game GenresSimulation games Many simulation games aim to simulate physicalactivities such as flying an aircraft (MicrosoftFlight Simulator), playing golf or football etc.(sometimes with as much realism as possible). Other forms of simulation game aim to providesimulations of forms of management, e.g. footballmanagement games, city management (SimCity),railroading, etc. Often the simulation is intended to be fun asopposed to accurate, e.g. Wing Commanderand X3 are notable space combat simulationgames Others popular games in this category includeThe Sims series where the player ‘controls’ thelives of computer characters.

An Introduction to Genre Theory - University of Washington
A number of perennial doubts plague genre the-ory. Are genres really 'out there' in the world, or are they merely the constructions of analysts? Is there a finite taxonomy of genres or are they in principle infinite? Are genres timeless Platonic essences or ephemeral, time-bound entities? Are genres culture-bound or transcultural?.
5m ago
16 Views

The Web Game Developer's Cookbook: Using JavaScript and .
“A wonderful overview of the HTML5 Game Development landscape, covering a wide range of tools and 10 different game genres.” —Pascal Rettig Author of Professional Mobile HTML5 Game Development “With a friendly and reassuring tone, Burchard breaks down some of the most well-known gaming genres into their basic ingredients.
7m ago
17 Views