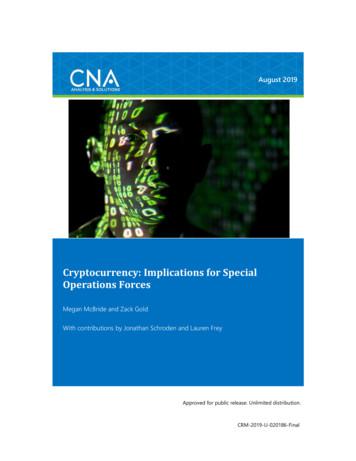 AbstractCryptocurrencies are strictly digital currencies, are typically overseen by a decentralized peer-to-peer community,and are secured through cryptography. Cryptocurrencies have relative benefits for those who engage in illicit activity.This paper includes: (1) a detailed taxonomy and examples of nefarious activities involving cryptocurrencies, such asfunding terrorist activity, money laundering, cybercrimes, and regulatory crimes; (2) a discussion of state-actorengagement in the cryptocurrency arena that explores Iranian, North Korean, Russian, and Venezuelan activity inskirting sanctions, mining cryptocurrencies, participating in exchange hacking and ransomware, and usingcryptocurrencies to fund information operations; (3) analysis attempting to anticipate the mid-term future of thecryptocurrency ecosystem; and (4) the tactical and strategic challenges and opportunities of cryptocurrencies for USspecial operations forces.This document contains the best opinion of CNA at the time of issue.It does not necessarily represent the opinion of the sponsor or client.DistributionApproved for public release. Unlimited distribution.Cover image credit: “SOFWERX Hosts Cyber Capability Expo.” Master Sgt. Barry Loo, US Special OperationsCommand, Oct. 20, 2017.Approved by:August 2019Jonathan Schroden, Research Program DirectorSpecial Operations ProgramCenter for Stability & DevelopmentStrategy, Policy, Plans, and Programs Division (SP3)Request additional copies of this document through inquiries@cna.org.Copyright 2019 CNA. All rights reserved

Executive SummaryIn March 2018, Merriam-Webster announced that it would add the word cryptocurrency to itsdictionary. 1 They noted that the word had first been used in 1990, and the definition theyoffered mentioned three core characteristics:Any form of currency that only exists digitally, that usually has no centralissuing or regulating authority but instead uses a decentralized system torecord transactions and manage the issuance of new units, and that relies oncryptography to prevent counterfeiting and fraudulent transactions. 2To increase understanding of the potential implications of cryptocurrencies, in 2018 the JointSpecial Operations University (JSOU) asked for research on the topic, “The evolution ofcryptocurrency: future challenges and opportunities for SOF [special operations forces].” 3 CNAinitiated this study in response to that call for research.As we conducted our research, we identified a gap in knowledge of cryptocurrencies among USmilitary and government personnel. To fill this knowledge gap, we simultaneously published acompanion piece to this study: “Cryptocurrency: A Primer for Policy-Makers.” Readers new tocryptocurrencies, or interested in increasing knowledge in a specific area, are directed to thecompanion primer for a more detailed exploration.This document assumes a baseline understanding of cryptocurrencies, and focuses on the fourquestions that motivated our analysis of the implications of cryptocurrencies for SOF:1.What operational considerations are relevant as SOF considers action in this arena?3.What are the likely next evolution(s) in the cryptocurrency ecosystem?2.4.What is the range of concerning activities in which cryptocurrencies have beenobserved?What challenges and opportunities do cryptocurrencies present to SOF given thecurrent (and potential future) state of affairs?“The Dictionary Just Got a Whole Lot Bigger,” Merriam-Webster, Mar. 2018, ncy,” Merriam-Webster, urrency.Joint Special Operations University, Special Operations Research Topics 2018 (Revised Edition for Academic Year2019), (MacDill AFB, FL: JSOU Press, 2018), https://jsou.libguides.com/ld.php?content id 41898487.3CNA Research Memorandum i

Operational considerationsThe dynamic nature of the cryptocurrency ecosystem makes it difficult to measure marketpenetration, but proxy measures—including the proliferation of new cryptocurrencies, theglobal network of access points, and survey data on cryptocurrency adoption—suggest thatthe market has not yet fully matured. In addition, cryptocurrencies are more vulnerable thanpopular culture suggests. In a discussion of common myths about, and weaknesses of,cryptocurrencies, this paper addresses 51 percent attacks, exchange hacking, technicalvulnerabilities, human error and avarice, anonymity, and immutability.Observed activitiesThe global response to cryptocurrencies has been varied, but to date Venezuela is the onlynation confirmed to have launched its own cryptocurrency. That said, other nations of strategicsignificance to the US—Russia, Iran, and North Korea—are also active in this space.Additionally, cryptocurrencies are popular among criminals engaged in a wide variety ofillegitimate activities that we assess to fall into three broad categories: regulatory crimes,conventional crimes (including terrorist activity), and cybercrimes.(Likely) futures of cryptocurrencyPredicting the future of cryptocurrency is a precarious undertaking, but we assess that twomajor variables will shape the future of cryptocurrencies: regulation and adoption. Each ofthese variables may either increase or stall, and our analysis explores the four possiblepermutations this would produce:1.2.3.4.Scenario 1: Increased adoption and stalled regulationScenario 2: Increased adoption and increased regulationScenario 3: Stalled adoption and increased regulationScenario 4: Stalled adoption and stalled regulation (i.e., the status quo)Implications for SOFThis paper concludes by considering the tactical and strategic challenges and opportunities ofcryptocurrencies for SOF.Challenges include: Fractured regulatory environment. The regulatory environment forcryptocurrencies is currently fractured, and is thus an obstacle to tracking andinterdicting the financial activities of threat groups.CNA Research Memorandum ii

Evolution of technology (and nefarious behaviors). Although government actorshave increased their attention to the nefarious use of cryptocurrencies, the ecosystemis evolving at a faster rate than the government’s capacity to stop this behavior. 4Lack of knowledge, training, and education. It is not clear that any part of the USgovernment—including the SOF enterprise—is prepared to fully address the nationalsecurity challenges posed by cryptocurrencies. As a result, SOF should not assume thatsome other part of the US government will take care of these issues for them. Thismeans that SOF will need to deepen their own knowledge, which should entaildeveloping forms of education and training on cryptocurrencies and likely futuretrends, as well as actively folding lessons from ongoing operations that encountercryptocurrencies into training for future missions.Opportunities include: Exploit vulnerable existing technology. The existing technology is clearlyvulnerable to exploitation, and SOF might mine information via at least two distinctvectors: cryptocurrency exchanges and user identities.Collaborate with (or lead) new partners. Because relatively few US governmententities are knowledgeable about the cryptocurrency ecosystem, SOF have anopportunity to (1) collaborate with new partners, (2) maximize the collective abilityto track activity, and (3) assume the role of knowledge leader.Shape the future environment. As the ecosystem evolves, SOF will have a chance toadvocate for regulatory actions that might be helpful from an operational standpoint.Alternatively, SOF might argue against certain potential regulatory actions.Exploit the vulnerabilities of cryptocurrencies as users. Many features ofcryptocurrencies make them particularly compelling for nefarious actors. Many ofthese same features, however, are also available to SOF (until regulatory frameworksand/or more restrictive authorities prevent such activities).The challenges and opportunities that SOF will confront in this space vary considerably acrossthe possible futures we outlined. However, our analysis shows that the lack of knowledge,training, and education is problematic regardless of how the future takes shape. It also showsthat there is no future in which SOF is unable to exploit this technology (see the figure on thenext page).4Megan McBride and Lauren Frey, conversation with industry experts, Feb. 5, 2019.CNA Research Memorandum iii

Likely futures of cryptocurrencies and potential implications for SOFSource: CNAAt present, widespread expertise regarding cryptocurrencies is lacking in the US government,and more detailed analysis of the specific issues raised above is needed to fully explore andunderstand them. But there is also a clear path forward and thus little doubt that SOF shouldbe looking at cryptocurrencies in more detail, to both mitigate the challenges and exploit theopportunities that we identified in our research.CNA Research Memorandum iv

IntroductionIn March 2018, Merriam-Webster announced that it would add the word cryptocurrency to itsdictionary. 5 They noted that the word had first been used in 1990, and the definition theyoffered mentioned three core characteristics:Any form of currency that only exists digitally, that usually has no centralissuing or regulating authority but instead uses a decentralized system torecord transactions and manage the issuance of new units, and that relies oncryptography to prevent counterfeiting and fraudulent transactions. 6By the time the term was introduced into the Merriam-Webster Dictionary, it was alreadycirculating through popular culture. It had been mentioned in multiple episodes of TheSimpsons (as well as episodes of CSI, Family Guy, and The Big Bang Theory), it had made itsappearance in major Hollywood films (including Horrible Bosses 2 and Deadpool), and it hadeven appeared as an answer on an episode of Jeopardy (in 2014). 7 Moreover, in 2017 the valueof one Bitcoin skyrocketed to more than 20,000 resulting in widespread media coverage anda virtual gold rush of new investors. Even people who did not join the frenzy became aware ofthe trend, and by 2018 nearly 80 percent of Americans reported having heard the term“Bitcoin.” 8 Despite this familiarity, relatively few people actually understand the technology orits potential implications.Similarly, the US Department of Defense (DOD) is aware of cryptocurrencies, but often lacks athorough understanding of their potential implications in the national security space. Toincrease knowledge on this issue, in 2018 the Joint Special Operations University (JSOU) askedfor research on the topic “The evolution of cryptocurrency: future challenges and opportunitiesfor SOF [special operations forces].” 9“The Dictionary Just Got a Whole Lot Bigger,” Merriam-Webster, Mar. 2018, ncy,” Merriam-Webster, urrency.Julia Herbst, “A Comprehensive Guide to Crypto References in Pop Culture,” BREAKERMAG, Oct. 29, f-crypto-references-in-pop-culture/.7Nikhilesh De, “Survey: Nearly 80% of Americans Have Heard of Bitcoin,” Coindesk, Sept. 6, americans-have-heard-of-bitcoin.8Joint Special Operations University, Special Operations Research Topics 2018 (Revised Edition for Academic Year2019), (MacDill AFB, FL: JSOU Press, 2018), https://jsou.libguides.com/ld.php?content id 41898487.9CNA Research Memorandum 1

increase knowledge on this issue , in 201 8 the Joint Special Operations University (JSOU) asked for research on the topic “The evolution of cryptocurrency: f uture challenges and opportuniti

The Wider Impact of a National Cryptocurrency
Central banks should consider a crypto-sandbox approach to mitigate the potential risks of issuing a national cryptocurrency. The crypto-sandbox should include payment players and specific testing for special cyber-security attacks and economic changes. A possible area of immediate
3m ago
10 Views

Institutionen för systemteknik - DiVA portal
The standard, as well as the partnership, is called AUTOSAR, which stands for Automotive Open System Architecture. The partnership was founded in 2002, initially by BMW, Bosch, Continental, DamienChrysler, and Volkswagen, with Siemens joining the partnership shortly thereafter. [6]
5m ago
98 Views